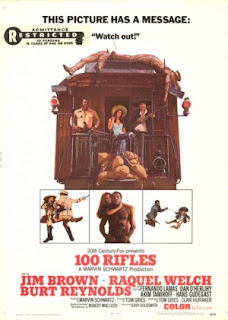 One of my latest low-priced DVD pickups is the 1969 Western 100 RIFLES, starring Jim Brown, Raquel Welch, and Burt Reynolds.

100 RIFLES, despite being a 20th Century Fox movie, was filmed entirely in Spain, where many Spaghetti Westerns were being made at the time. 100 RIFLES tries very hard to seem like a Spaghetti Western, but in the end it's just too Hollywood of a product. Jim Brown plays Lyedecker, an American U.S. Marshal who travels to Mexico to apprehend Yaqui Joe (Burt Reynolds) for robbing a bank in Phoenix. Joe committed the robbery in order to buy 100 rifles for his Yaqui compatriots who are battling a vicious Mexican warlord named General Verdugo (Fernando Lamas). Lyedecker winds up helping Joe and his beautiful but determined cohort Sarita (Raquel Welch) in their fight against Verdugo.

100 RIFLES isn't the greatest Western ever made, but you can't say that it's boring--nearly every five minutes or so an action scene breaks out. The amount of violence is only one of the ways 100 RIFLES shows how it was influenced by Euro Westerns. The Mexican Revolution setting and the pairing of a taciturn, straight-arrow male character (Lyedecker) with a more colorful, devious one (Joe) are major elements of most Spaghetti Westerns. 100 RIFLES even features Aldo Sambrell in a supporting role as one of Verdugo's lackeys--Sambrell seemingly appeared in more Spaghetti Westerns than any other actor.

I feel, however, that 100 RIFLES is more reminiscent of THE WILD BUNCH than a typical Euro Western. (Both movies were produced and released at about the same time.) 100 RIFLES and THE WILD BUNCH have a lot of plot similarities--American gunmen finding themselves involved in the Mexican troubles, an evil Mexican general ravaging native peoples, an attack on a heavily guarded train, etc. The Mexican general in THE WILD BUNCH has a German military advisor--and so does General Verdugo in 100 RIFLES, played by Eric Gudegast, who is now better known as Eric Braeden, the actor who has spent years being Victor Newman on the TV soap opera THE YOUNG AND THE RESTLESS. There's even a few slow-motion frames of gunshot victims falling to the ground in 100 RIFLES (THE WILD BUNCH would make slow-motion movie violence famous). The major difference between the two films is that Sam Peckinpah's direction of THE WILD BUNCH elevated that film to a legendary piece of brutal art, while the director of 100 RIFLES, Tom Gries, lacked Peckinpah's flair and ability to make despicable characters interesting.

Jim Brown had made his movie debut in a Western, the vastly underrated RIO CONCHOS. The former NFL great does have a fine screen presence here, and he ably handles the physical rigors of the part. Brown not only got lead billing, he also got to have a love scene with Raquel Welch, the leading sex symbol of the time. This was a rare thing for an African-American actor in 1969 (some might say it's a rare thing for a black actor now). Brown would go on to star in several other Westerns, and that is the genre that best served his film career.

Raquel Welch had already made her Western debut with 1968's BANDOLERO! alongside James Stewart and Dean Martin (a movie worth seeking out, by the way). There wasn't much to her role in that film, but 100 RIFLES gives her a chance to shine as Sarita. Welch gets to shoot, ride, and fight, and she more than holds her own against her two macho co-stars. Sarita may be a poor Mexican Indian revolutionary, but that doesn't stop her from looking gorgeous (I don't think there could be anything that would do that). Welch uses her natural charms to her advantage twice in the film--early in the story she acts as if she's disrobing for one of Verdugo's soldiers, but then she stabs the man with a tree limb. In the train attack sequence, she distracts Verdugo's army by washing herself underneath a water tower, wearing nothing but a thin shirt. She then proceeds to start taking the men down with a shotgun! Is the water tower scene a bit too obvious? Maybe....but I'm not complaining. Welch would go on to star in HANNIE CAULDER, her most famous Western, but I have to say that overall Sarita is one of her best roles.

Burt Reynolds as Yanqui Joe is basically a preview of his many good ole' boy characters he would play in the 1970s. Reynolds is entertaining as always, but you get the feeling when you watch 100 RIFLES that the actor knows he's being outshined by Brown and Raquel. Reynolds had already starred in a real Spaghetti Western, the ultra-violent NAVAJO JOE. What hurts all three of the main stars is that none of their characters are developed very well--we don't know all that much about them, and it's hard to have an emotional connection to them. A director such as Peckinpah would have given the story more dramatic weight.

If you're thinking Fernando Lamas as a brutal Mexican general is a bit of miscasting, you're right. Lamas is too refined for such a role--a movie that is trying to be like a Spaghetti Western needs a crazy, bizarre, villainous portrayal--from an actor like, say, Jack Palance. I have to mention that Soledad Miranda has a small role in this film--she is now a cult icon for her work with another cult icon, director Jess Franco.

100 RIFLES is what I would call a junk-food Western. It looks and sounds great (the Spanish locations give the story an epic feel, and Jerry Goldsmith contributes a nice Mexican-flavored music score), and there's plenty of action and gunplay. It is diverting entertainment, but it doesn't stick in the memory the way great Westerns do, and it lacks the wild & provocative attitude of the Spaghetti Westerns it tries to emulate. 100 RIFLES should at least be remembered as one of Raquel Welch's best performances.
Posted by Dan Day, Jr. at 4:39 PM