PRINCE OF FOXES On Blu-ray From Kino 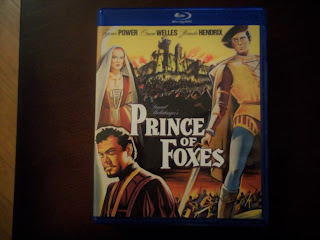 One of Kino Lorber's latest releases in their Studio Classics line is the 1949 PRINCE OF FOXES, starring Tyrone Power and Orson Welles. From the cover art one would assume that it is a rollicking swashbuckler, much like THE MARK OF ZORRO and THE BLACK SWAN, which also starred Power. But it is more in the realm of historical melodrama--during his audio commentary for this Blu-ray Troy Howarth calls the film "a thinking man's action picture."

I had never seen PRINCE OF FOXES, and quite frankly, during my time as a film buff I don't remember hearing all that much about it. The subject matter may have something to do with this--PRINCE OF FOXES is set in the Italian Renaissance, a period very few Americans (such as myself) are all that familiar with. Instead of a generic good guys-bad guys scenario, the audience is shown the political machinations of the dastardly Cesare Borgia (Orson Welles). Tyrone Power plays Andrea Orsini, a man who, at the beginning of the story, serves under the Borgias. Andrea isn't the usual lovable rogue that Power played before in other historical spectacles--the man is more of an opportunist, someone who is willing to do whatever it takes to get ahead in a violent and desperate time (Orsini isn't even his real family name--he's using it to hide his humble origins). Borgia dispatches Andrea to a small dukedom that he wishes to take over. There Andrea gets to know the kindly and thoughtful elderly Duke (Felix Aylmer) and his young attractive wife (Wanda Hendrix). Andrea and the Duchess develop a mutual attraction, but both of them have great respect for the Duke. Andrea is so taken with his hosts that he pledges his service to them against the oncoming threat of Borgia's army. The result is that a man who once looked out only for himself now will risk death to protect others.

PRINCE OF FOXES, despite being a 20th Century Fox production, was filmed entirely in Italy. This gives it a verisimilitude that few movies made in the same period can match. The exteriors and locations used throughout the story are stunning, and they are made even more so by the exquisite black & white cinematography by Leon Shamroy. Visually the movie is fantastic, especially on this Blu-ray, but I can't help but wonder how it would have appeared in color. The costumes are elegant as well. Director Henry King worked with Tyrone Power a number of times, and he does a very fine job here. King isn't considered by many in this day as one of the great Hollywood studio directors, but go on IMDB and check out his body of work and you'll come away impressed. The attack on the Duke's city by Borgia's army (which is located on a daunting precipice) is very well staged, but Power doesn't get to engage in any swordplay until the very end...and then only briefly.

By the time of PRINCE OF FOXES Tyrone Power had already starred in several historical adventures. What's different about his Andrea is that he's not a pure hero type (the fact that he serves the Borgias to begin with tells you something about his character). Andrea changes as a person during the story, and Power is effective at showing this. Cesare Borgia is one of the great villains in all of history, and Orson Welles plays him to the hilt. Welles actually has very little screen time, but due to his larger-than-life flamboyant portrayal of Borgia, he makes the viewer think about him even when he's not around. Everett Sloane gets a very show part as a shifty assassin who changes his loyalties about every five minutes. Wanda Hendrix is certainly attractive, but one wishes that a bigger personality might have played the main female role in this film (Linda Darnell would have been perfect for the role).

In my opinion, though, it is British character actor Felix Aylmer as the wise Duke who steals the show. It would be easy for the quiet, dignified Aylmer to be overshadowed by all the historical daring-do, but his soft-spoken wisdom makes more impact than any action scene. For some reason distinguished English stage actors were made for historical epic movies like this.

The main extra on this Blu-ray is an audio commentary from author Troy Howarth. At first it might seem unusual for Howarth to talk about this particular film, since he has written books on Mario Bava and Giallo cinema. But PRINCE OF FOXES was filmed in Italy, and Howarth even mentions a connection the movie has to Bava. Howarth discusses the novel on which the film was based, and he thoroughly analyses the picture from several different aspects of the production. It's a commentary well worth listening to.

I made a good decision in buying this Blu-ray of PRINCE OF FOXES. I assumed that it was going to be another typical Tyrone Power costume adventure--but it's much more than that. The movie has some dark elements to it, and it showcases a time and place in history that one doesn't get to see much on-screen (at least in American films). This isn't a action-packed swashbuckler--but it's a fine film nonetheless, and one that deserves more attention.
Posted by Dan Day, Jr. at 2:45 PM