ONE MILLION YEARS B.C. On Blu-ray From Kino 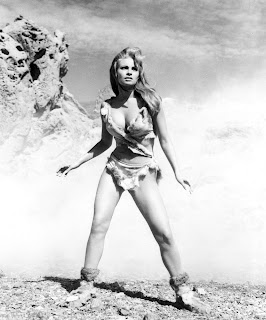 ONE MILLION YEARS B.C. (1966) is one of the great all-time geek movies. It's got cavepeople, dinosaurs, volcanic explosions...and it features the special effects wizardry of the legendary Ray Harryhausen. It also happens to be a Hammer film, and it is responsible for one of the most magnificent movie publicity photos ever taken (see above). The subject of that photo, Raquel Welch, became a sex symbol superstar, and she's a major reason why the movie became, and remains, so popular.

Kino Lorber has released a new Region A Blu-ray of the film, which includes two different versions of it--the 91 minute American cut, and the 100 minute international version. Both cuts look fantastic, way better than I've ever seen the movie presented.

ONE MILLION YEARS B.C. is actually a remake of a Hal Roach film called ONE MILLION B.C. (I wonder if people complained about that in 1966). There isn't that much of a plot--in the dawn of pre-history, a man known as Tumak (John Richardson) is kicked out of his tribe, a violent group referred to by the narration as the Rock People. Tumak's wanderings bring him into contact with dangerous creatures, and a peaceful group, the Shell People, who happen to include among them Loana the Fair One, in the lovely form of Raquel Welch. (Personally, I'd give Loana a grade way more than fair.) Tumak and the more advanced Shell People learn from one another (the Shell People are so advanced, they seem to have invented hair conditioner and eye liner), but more obstacles lie ahead for the group, such as a volcano which constantly looms in the background.

You either accept this film for what it is, and enjoy it, or you don't. Judging ONE MILLION from a serious historical or scientific perspective isn't the way to go about analyzing this film. No, cavepeople and dinosaurs never existed at the same time...but, really now, wouldn't it have been better if they did? The combination of Ray Harryhausen's brilliant stop-motion creations and gorgeous cave women like Welch and Martine Beswicke make ONE MILLION a fun viewing experience. Yes, there are times when things get a bit goofy, and there's a few dull stretches--but watching this film again on Blu-ray made me appreciate how good a production it is. The Canary Islands locations do give the story a bizarre prehistoric look, and the interior cave sequences are impressively mounted. The music by Mario Nascimbene is appropriately weird and dissonant, and it also gives the movie a sense of epic foreboding. This was reportedly Hammer's most expensive production up till that time, and once again I must point out that a movie made in this manner has a texture and reality to it that all the best CGI in the world just can't match.

Many folks will look upon Ray Harryhausen as being the most important part of ONE MILLION YEARS B.C. instead of Hammer Films or Raquel Welch. The FX master contributed some of his finest work here--the attack of a dinosaur on the Shell People is one of Harryhausen's greatest sequences. For those that scoff at the caveman vs. dinos aspect of ONE MILLION, let's consider Hammer's CREATURES THE WORLD FORGOT. That movie does not have any dinosaurs, and it's terrible. Hammer made an astute decision in bringing Harryhausen onto the project.

While the technical aspects of ONE MILLION YEARS B.C. are impressive, the performers in front of the camera deserve some respect as well. One can well imagine that the actors probably felt ridiculous at times--Raquel Welch has admitted this in interviews--but considering circumstances such as there not being any real dialogue in the film, the cast comes off better than expected. John Richardson (who was the male lead in Bava's BLACK SUNDAY and Hammer's SHE) capably shows Tumak's conflicting emotions throughout the story. Raquel Welch certainly brought her natural attributes to the role of Loana, but she does make the character kindly and likable, without being just a helpless scream queen. Martine Beswicke gets a very showy role as the hot-blooded leading lady of the Rock People, and she and Raquel get to engage in a majestic catfight (Martine had already participated in a great screen catfight in her role as a gypsy girl in the James Bond film FROM RUSSIA WITH LOVE). Other Hammer acting veterans such as Robert Brown and Percy Herbert also appear in the film.

ONE MILLION YEARS B.C. has to be the very first Hammer film I ever saw. It was on American TV constantly when I was a little kid in the 1970s (this was long before I even knew what Hammer Films even was). Kino does its usual superlative job with this title--each version of the film gets its own disc, and both look superb. The international cut is by far the better edit, but it's nice that Kino included the American version. A poster & still gallery is included, along with some interviews. A short talk with Raquel Welch (from 2002) presents the actress as being somewhat embarrassed by the picture. A visit from Ray Harryhausen (also from 2002), while also short, is a much better extra, with the FX genius discussing the making of ONE MILLION. There's also a 2016 interview with Martine Beswicke, in which she delightfully talks about her memories of the film.

The main extra is an audio commentary from Tim Lucas. He gives out much relevant information about the production, but he also gives some thoughtful analysis about the motivations and the interpersonal relationships between the characters. Lucas also makes some apt comparisons between ONE MILLION and Kubrick's 2001: A SPACE ODYSSEY. It would be easy to become snarky when talking about a movie like ONE MILLION. but thankfully Lucas doesn't do that, and his insights into the script are welcome.

I was greatly anticipating this release, and I wasn't disappointed. I even thinks it ranks as one of the best American Blu-rays of a Hammer film to this point. I know some who read this blog won't be interested in a film like ONE MILLION YEARS B.C., but it's right up my alley. The best defense I can give of it is--out of all the giant big-budget fantasy spectaculars released over the last few years, how many of them will be talked about 50 years from now? 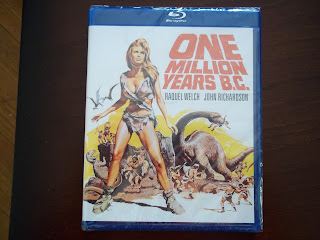