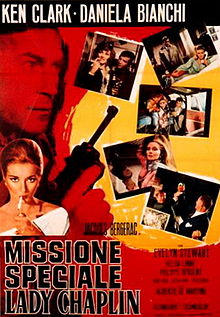 My latest YouTube wanderings led me to the 1966 Eurospy film SPECIAL MISSION LADY CHAPLIN. This Italian/French/Spanish production was one of a series of movies about a CIA agent named Dick Malloy, played by American actor Ken Clark. The real star of the show, however, is Daniela Bianchi as Lady Arabella Chaplin.

Daniela Bianchi played Bond Girl Tatiana Romanova in the 1963 007 film FROM RUSSIA WITH LOVE. To this day Bianchi is considered one of the best Bond Girls (especially by me). The Italian actress spent most of her short movie career playing in Bond knock-offs, including OK CONNERY/OPERATION KID BROTHER, alongside Sean Connery's brother Neil (I wrote a post about this film in September 2015). Bianchi was an absolutely stunning woman, but in FROM RUSSIA WITH LOVE she still was able to bring a sense of naive innocence to her character (even when she was wearing a nightgown and trying to seduce 007). In SPECIAL MISSION LADY CHAPLIN, she gets plenty of things to do other than look gorgeous, which she undoubtedly does.

The movie begins with a bang--Bianchi is dressed as a nun, and she walks into an abbey, where she proceeds to blow away a couple of monks with a machine gun! (Don't worry, the "monks" are really spies.) A very Bondian song about Lady Chaplin then begins to play over the credits, while the lady herself ditches the nun's habit to reveal a she's wearing a swimsuit underneath.

Lady Chaplin is involved in the search for a sunken American nuclear submarine, an incident which also attracts the attention of CIA operative Dick Malloy (Ken Clark). Malloy's investigations lead him to international businessman Zoltan (Jaques Bergerac)--with a name like Zoltan, you know he's going to turn out to be the villain. Zoltan is after the Polaris missiles stored on the sub, and he induces Lady Chaplin to help him in this endeavor. The beauteous Lady comes up with a clever scheme to smuggle a new missile fuel out of England--I won't reveal what it is, but suffice to say it's a very inventive plot point from the screenwriters. Malloy manages to track Lady Chaplin and Zoltan to where the missiles are, and he even manages to convince Chaplin to help him take down Zoltan.

Lady Chaplin isn't just a secret agent--she is also a fashion designer (she gets to wear at least a dozen different wild outfits during the story). She disguises herself as an old woman and a British military officer, among other things, and she's able to handle herself in just about any situation. Bianchi doesn't just get to do more than the usual Bond Girl--she's allowed to showcase her abilities than most supposed liberated female characters in movies made in the 21st Century. Ken Clark may have top billing, and his Dick Malloy may be the lead character, but Daniela walks away with the film. 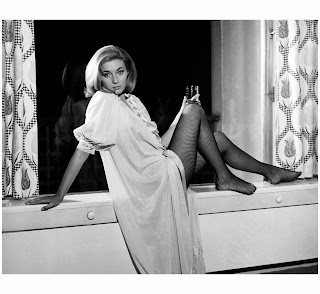 Ken Clark's Dick Malloy comes off as rather bland compared to the amazing Lady Chaplin, but he's an okay sort of generic Secret Agent type. Clark doesn't have the most magnetic screen personality in the world, but he does handle himself well in the action scenes, and he appears to be doing most of his own stunts. It appears that Clark was dubbed in this movie, which makes it harder to properly judge his performance. What hurts Clark as Malloy the most is that he's surrounded by eccentric foreign types (or fantastic looking women) who are more interesting than he is. By the way, Malloy goes by the number "077"--at a couple points in the film he's driven around in a car that has that number emblazoned on the side. He might as well just wear a sign around his neck saying I AM A SECRET AGENT.

SPECIAL MISSION LADY CHAPLIN has a number of fine action scenes, such as a battle between Dick Malloy and some bad guys in a bullring. The various fights in the film are staged and edited rather well, and this isn't another low-budget Bond ripoff--among the locations showcased are New York City, London, Paris, and Madrid. The story has a rapid pace to it, and some of the script's elements (such as Lady Chaplin's fuel-smuggling operation) are more impressive than those found in better-known spy films. Two directors (Alberto De Martino and Sergio Grieco) are credited, but that doesn't seem to have adversely affected the production. Special mention must be made of Eurocult actress Helga Line (NIGHTMARE CASTLE, HORROR EXPRESS) who has a small but important role. The film's trendy 60s music soundtrack is by Bruno Nicolai.

The print that I viewed of this film was in widescreen, and it was quite good visually. I honestly don't know if it was uncut--it's hard to say that about any 1960s movie made in Europe. I will say that SPECIAL MISSION LADY CHAPLIN was a lot better than I thought it would be. I would even rate it on the same level as some of the weaker Bond efforts. It's entertaining and with a leading lady like Daniela Bianchi, certainly easy on the eyes. I tried to find if there was an official DVD or Blu-ray release of this film, but no such luck. There needs to be one, though. I intend to seek out the other titles in the Dick Malloy series.