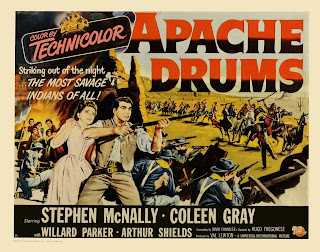 While doing research on Val Lewton for the post I wrote on the new Shout Factory Blu-ray of THE BODY SNATCHER, I discovered that the last film he produced before his untimely death at age 46 was a Western for Universal called APACHE DRUMS in 1951. The movie just so happened to be available for free on XfinityOnDemand, and I watched it last night.

APACHE DRUMS is a taut, exciting Western, and it certainly has the Lewton touch about it. The movie starts out with a voice over from a Native American perspective--quite unusual for the time. The speaker explains that a tribe of Mescalero Apaches has been driven away from their lands in the American Southwest, and now the group suffers from hunger. We then are introduced to the people inhabiting the small hamlet of Spanish Boot. A gambler with a bad reputation, Sam Leeds (Stephen McNally) has just killed two men in self defense over a poker game. Leeds is told to leave town by the mayor/blacksmith, Joe Madden (Willard Parker). Madden has a grudge against Leeds because both men are attracted to Sally (Coleen Gray). The town also forces out a dance hall owner and her girls (one gets the idea that the girls do more than just dance). Leeds follows the women out of town, and later comes across their bodies, massacred by Mescaleros now on the warpath. Leeds rides back to Spanish Boot to warn the townspeople, but at first they don't believe him. They soon learn the truth, and Leeds and Madden must put aside their differences and work together in holding off the Apaches.

One might assume that APACHE DRUMS is just another B-movie Hollywood Western, but it's much more than that. For one thing, director Hugo Fregonese uses a number of what I would call John Ford-like shot compositions. I would say the entire picture has a Fordian-like aspect to it, no doubt enhanced by the presence of Arthur Shields as the fire-and-brimstone town Reverend (he played a very similar role in Ford's DRUMS ACROSS THE MOHAWK). The story takes its time at the beginning to establish the main characters and the situation, and once the threat of the Apaches is established, and the helplessness of the town is conveyed (the people are essentially cut off and they have no water supply), the tension never lets up.

Stephen McNally's Sam Leeds is a very interesting character. He's a flawed man, who readily admits to Sally that the honest, hard-working way of life doesn't appeal to him. But he changes over the course of the story, by volunteering to go out and bring the town water and by leading the standoff against the Apaches at the end. McNally usually played villains and tough guys, so he's very believable as Leeds--he gives the man a kind of cocksure quality. Willard Parker (who would go on to star in the Terence Fisher-directed British science-fiction film THE EARTH DIES SCREAMING) is much more of a straight arrow as Joe Madden. Coleen Gray's Sally, the nice girl in the middle, even says that the reason she prefers Sam Leeds is that she wants to change a bad man--at least there's an example of a woman in a movie actually admitting this.

The most notable aspect of APACHE DRUMS is the extended climax, where the townspeople hole up in the church and try to fight off the Apaches until help arrives. The town church is basically a large room with window-like openings set high in the walls, which prevents those within from seeing what is going on outside. The effect gives the church a tomb-like feeling. As the townspeople wait out the night, the Apaches can be heard constantly chanting outside. Most filmmakers would cut to the massing Apaches over and over again, but this doesn't happen here--they are almost a supernatural presence, more felt rather than seen. None of the attacking Apaches are individualized either. Usually in this type of Western there is a chief or lead warrior character that is a counterpoint to the main hero. There isn't here, which makes the massed Apaches seem even more menacing. The only fully fledged Native American role is that of an Apache who is an Army Scout (Armando Silvestre) and fights alongside the townsfolk--he winds up being braver than most of the white men he is defending.

When one thinks of Val Lewton, one thinks of horror films, and the climax of APACHE DRUMS gives a viewer plenty of opportunities to be reminded of that genre. For one thing, there's a quite effective example of one of Lewton's famed "buses"--a sudden unexpected occurrence that jolts the audience. When some of the Apaches do make it through the high window-like openings of the church, they are painted in various shades of body paint, making them seem like bizarre demons. Eventually the Apaches set the town of Spanish Boot on fire, which results in giving the interior of the church an eerie orange glow. The use of color in this film was just as striking as Lewton's use of black & white for his RKO thrillers. (The cinematographer for APACHE DRUMS was Charles P. Boyle.)

One can't help but be reminded of the legendary movie ZULU while watching the climax of APACHE DRUMS--especially when at one point the townspeople sing "Men of Harlech" to drown out the chanting of the Apaches! (ZULU writer-director Cy Endfield must have seen this movie.) I would even rank the climax of APACHE DRUMS as one of the best sequences in any Lewton-produced movie.

You can't help but wonder what would have happened had Val Lewton lived and continued to work for Universal. Would the studio have put Lewton to work on any of its horror & science-fiction pictures? What APACHE DRUMS proves is that Lewton easily handled color, and he could have worked in any genre. The man had a knack for taking low-budget pictures and making more out of them than others could.