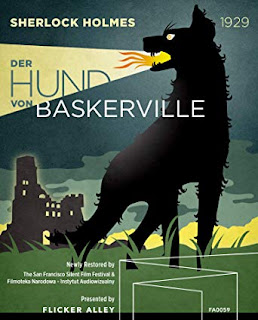 Flicker Alley presents a wonderful find on home video--a rediscovered and restored 1929 German silent version of the most famous Sherlock Holmes story, THE HOUND OF THE BASKERVILLES. The Blu-ray release also features a 1914 German film adaptation of the tale.

For me the discovery of a lost Sherlock Holmes film is the equivalent of a lost movie featuring a superhero character. This 1929 film (German title DER HUND VON BASKERVILLE) was the last silent Sherlock Holmes feature. According to the booklet included with the Blu-ray, the movie was restored from a 35mm nitrate print held by the Polish National Film Archive and a 9.5mm Pathe-Baby print. There are a few scenes missing, but they are recreated in the film by stills and title cards. The visual quality isn't spectacular, but the important point is that the film is now available.

The 1929 German HUND was directed by Richard Oswald, and it follows the Conan Doyle novel fairly closely (the story structure actually has a lot in common with the Hammer Films 1959 version). What highlights the 1929 version is how atmospheric it is. In most film adaptations Baskerville Hall is just a large house--here it is almost a main character, a dark, moody place that has an interior design that reminds a film buff of the work done by Universal's Charles D. Hall or Hammer's Bernard Robinson. The moor in this version is quite notable as well--a dank, windblown, expressionistic landscape that gives off the feeling of dread and menace. Oswald (who also is credited as a writer on the film) turns the story into more of a old dark house mystery--the movie feels as if it was made by Paul Leni for Universal.

The creepy particulars of this version are welcome, because the Sherlock Holmes presented here, as played by American actor Carlyle Blackwell, is rather ordinary. (The title card introducing him says that he is "the genial detective".) Blackwell doesn't have the eccentricities of a Jeremy Brett or the intensity of a Basil Rathbone--he reacts to just about everything with a hearty laugh. He does get to wear the deerstalker and smoke a pipe. The most notable actor in this production is Fritz Rasp, who plays the villainous Stapleton. Rasp appeared in a number of great German silent films as various creepy characters, so his casting here gives the game away fairly easy.

As for the actual hound, the movie suffers the way most of the other versions of the tale always do--the "demon dog" doesn't come off as very demonic. Nevertheless, this 1929 silent is very well done, and it will be of interest especially for lovers of silent thrillers.

The 1914 DER HUND VON BASKERVILLE included on this Blu-ray is very much a product of its time. Richard Oswald was just the writer on this one--the movie was directed by Rudolf Meinert, who would go on to be production manager of THE CABINET OF DR. CALIGARI, and the photography was by Karl Freund, the future legendary cinematographer. The 1914 version is more of a adventure serial instead of a straight Holmes adaptation. The story is filled with secret passages, booby traps, last-second escapes, and the like. The character of Holmes takes second fiddle to that of Stapleton, who here becomes something of a super villain. Friedrich Kuhne, who plays Stapleton, acts in a broadly melodramatic manner, so much so that he becomes almost unintentionally funny. He's constantly raising his eyebrows and giving sideways dirty looks to people, and his dastardly deeds seem rather excessive--at one point he blows up a mailbox just to prevent Sherlock Holmes from receiving a letter! One does need to remember that this a 1914 European film, and allowances must be made for its style. The Holmes here is played by a Danish actor named Alvin Neuss, and he's more of a action hero than a detective. (He is introduced in a moodily lit scene wearing a dressing gown and smoking a pipe--this is the one moment in the film that comes closest to Conan Doyle.) The movie was successful enough in Europe to spawn a long line of sequels.

Flicker Alley adds two short programs as extras: one on the history of THE HOUND OF THE BASKERVILLES novel and how Conan Doyle came to write it, and one concerning the restoration of the 1929 HUND. A 25-page essay is included which also discusses the two films and their respective restorations. The disc is playable for A,B, and C regions.

Once again Flicker Alley has put together a magnificent package while also giving the general public the chance to see two features that were almost impossible to view before. I must point out that this Blu-ray is not cheap--the only reason I got it was that I recently purchased a new supply of contact lenses, and as a bonus I qualified for some gift cards (I figured I might as well use them on something I normally wouldn't get.) Sherlock Holmes aficionados will certainly be intrigued by this release. I wouldn't rate these two films as among the best Sherlock Holmes adaptations, but they probably have the most unique background.