Fay Wray And Robert Riskin, The Blogathon: Fay Wray In MYSTERY OF THE WAX MUSEUM 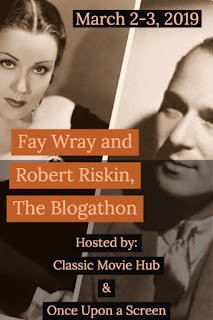 This is my contribution to Fay Wray and Robert Riskin, The Blogathon. I must point out that the day I am writing this, March 2, happens to be the birthday of Willis O'Brien...and yesterday, March 1, was the birthday of Lionel Atwill--two men who had a major impact on the movie career of Fay Wray.

Fay Wray is mostly remembered now as a "Scream Queen", which is unfair, considering that her true horror film roles were very few, and they were all filmed in a period of a couple years. Her body of acting work is far more extensive than that. Nevertheless, it is her horror films that still get shown on retro movie cable channels and get the most coverage on the internet.

Picking MYSTERY OF THE WAX MUSEUM (1933) for this blogathon might be too obvious a choice. The movie happens to be a huge favorite of mine--as a matter of fact, it's one of my fifty top favorite movies of all time. There's so many things I love about this film--the bizarre fusion of Gothic horror and Pre-Code big city Warners smart aleck attitude; the shot compositions of director Michael Curtiz; the atmospheric art direction of Anton Grot; and Perc Westmore's gruesome makeup for Lionel Atwill's mentally and physically scarred wax sculptor Ivan Igor, one of the best monster makeups ever.

The movie was filmed in two-strip Technicolor, and on the DVD I have of it, the colors have faded considerably--but I think that adds to the overall weirdness of the tale. MYSTERY OF THE WAX MUSEUM lasts only about 80 minutes long, but it has enough plot for two pictures (modern day critics of the film feel that there's too much plot, and it's too confusing at times). Like almost all Pre-Code films made at Warner Bros., the story moves so fast, and has so much going on in it that one forgets about any plot holes and just goes along for the ride.

I could go on and on about MYSTERY OF THE WAX MUSEUM--but this is a Fay Wray--Robert Riskin blogathon, and I'm specifically covering Fay Wray here. So let's focus on Fay's performance as Charlotte Duncan.

Fay Wray gets second billing in the opening credits, but the real female lead of the film is Glenda Farrell as snoopy and sarcastic newspaper reporter Florence Dempsey. It is Florence's investigations that lead to the revelation that the supposedly wheelchair-bound and decrepit wax museum proprietor Ivan Igor is actually a horribly burned madman who is murdering people and covering their bodies in wax.

Igor's original wax museum in London was burned down in 1921 by his unscrupulous partner as a scheme to collect on the insurance. (Igor wound up terribly disfigured by the fire--he hides his burns with a wax mask.) Now in 1933 Igor has opened a new museum in New York City. Unable to create wax sculptures due to his damaged hands, Igor targets those unfortunate folks who happen to resemble his old wax creations. This leads him to taking an interest in Fay Wray as Charlotte--she happens to be dating one of the sculptors in Igor's employ, a man named Ralph Burton (Allen Vincent). Charlotte also happens to be friend and roommate of Florence--if you think that's too much of a coincidence you'll just have to accept that nearly every character in the story is connected to each other in some way.

The reason for Igor's interest in Charlotte is that she resembles what he considered his masterpiece--a wax statue of Marie Antoinette that was the highlight of his London museum. (In the beginning sequence of the film, set in London of 1921, we can clearly see that the statue of Marie Antoinette is Fay Wray. Many nitpickers have pointed out over the years that Fay doesn't keep totally still during her posing as the statue--but if your attention is focused on that sort of thing you probably shouldn't be watching this type of film in the first place.)

Fay Wray really has more of a supporting role as Charlotte--she doesn't have all that many scenes, and she certainly can't compete with the showy performances of Lionel Atwill and Glenda Farrell. We don't get to know much about Charlotte. Unlike Florence, she doesn't seem to have a job--but at all times she is smartly and fashionably dressed. The relationship between Charlotte and Florence is fascinating. Despite the fact that they are roommates, they are as different from each other as can be. Are they childhood friends, or related to one another? Could their living arrangements be due to the Depression? I would have loved to have seen more films with Wray and Farrell playing these characters. (Glenda Farrell of course would go on to star in her own film series as newshound Torchy Blane, a somewhat toned-down version of Florence.) 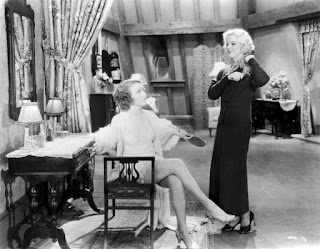 Fay Wray and Glenda Farrell in MYSTERY OF THE WAX MUSEUM


The difference between Charlotte and Florence is shown in a scene where, while dressed in sleepwear (this is a Pre-Code movie, after all) they discuss what relationships they prefer. The respectable and proper Charlotte is proud of her pairing with Ralph, despite the fact that he doesn't make a lot of money. Florence just wants a man "with lots and lots of dough".

Charlotte is meant to be the attractive damsel in distress, the object of Lionel Atwill's warped desires. She doesn't have the spunk or the attitude of Florence. One can say that the part of Charlotte is a boring one--Fay Wray doesn't get to spout snappy comebacks the way Glenda Farrell does. But Wray does make Charlotte likable and believable. When Ivan Igor is first introduced to Charlotte, he immediately sees in her the likeness of his lost statue of Marie Antoinette (helped no doubt by a fade in of Wray as the Antoinette statue over Charlotte's image, apparently to make sure all the viewers get the idea). Igor is smitten with Charlotte's beauty, and he tells her this. Wray shows that the young woman is a bit disconcerted by the strange old man's compliments, but she still responds to him with kindness and respect. In all her Scream Queen roles, Wray displayed an innate decency that made her characters incapable of anticipating what lies in store for them.

Wray really gets to shine in the climax of MYSTERY OF THE WAX MUSEUM. She arrives alone at the museum to surprise Ralph. As she walks furtively among the wax exhibits, one gets the feeling that the figures are "staring" at her. (I love how the New York wax museum appears to be set inside what looks like a art deco department store.) Charlotte eventually encounters Igor, and he manoeuvres her down into a magnificent secret laboratory which features a large boiling cauldron of wax. Igor finally reveals his plans to encase Charlotte in wax as a new Marie Antoinette and make her "immortal". Wray lets out one of her incredible screams (nobody could scream like Fay Wray) and she starts beating on Igor's face. The mad sculptor's wax face cracks, showing the horrible burned countenance beneath. Wray's screams, and her reading of the line "YOU FIEND!!" may be overtly melodramatic, but they perfectly fit the situation at hand. Igor shows Charlotte the dead body of his former partner, causing her to faint. This enables Igor to strap Charlotte down to a table and prepare her to be covered in wax. (After Charlotte is strapped down, she is shown covered in a sheet with bare shoulders exposed--giving one the risque impression that her clothes were removed by Igor.) Ralph and the police break in, and Charlotte is saved in time, while Igor is shot and plunges into the wax cauldron.

The final sequence of the film doesn't even feature Charlotte at all--it shows Florence receiving kudos for her story covering the whole affair, and then getting a marriage proposal from her equally sarcastic editor boss (Frank McHugh). Maybe it's just as well that we don't see Charlotte after her experience. A traumatized woman dealing with the after effects of such an ordeal wouldn't have suited the film's cynical nature.

In all honesty Fay Wray is definitely overshadowed by Glenda Farrell in MYSTERY OF THE WAX MUSEUM--Farrell by far has the better part. Wray does play a true Scream Queen role, but that's nothing to look down on. The term "Scream Queen" may be considered a derogatory term in the 21st Century, but one must shouldn't judge such a role by the standards of today. Wray's damsels in distress never acted silly--they always had a dignity about them. Even Wray's Ann Darrow in KING KONG, whether down-and-out on the streets of New York or running around half-dressed in the jungles of Skull Island, still had a nobility about her. Wray was an exceptionally beautiful woman--in MYSTERY OF THE WAX MUSEUM she's the beneficiary of some exquisite close-ups--but her Scream Queen characters never came off as vain or arrogant. Fay Wray certainly knew how to scream--but the reason she fit in so well in the horror films she appeared in was due to a kindly and appealing nature which came through to the audience. One can easily understand why Lionel Atwill and Kong longed for her, and why so many others wanted to rescue her.

Fay Wray was much, much more than a Scream Queen....but when she did have to play one, she did it better than almost anyone else before or since.