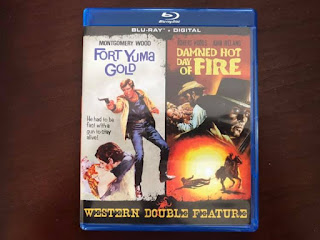 Mill Creek has just released a "Western Double Feature" Blu-ray containing the films FORT YUMA GOLD and DAMNED HOT DAY OF FIRE. These are two somewhat obscure Spaghetti Westerns--I had never heard of them before--but they do have a couple things in common: they are both set during the Civil War and the lead character in each film is part of a secret mission. Today I'll be looking at FORT YUMA GOLD.

FORT YUMA GOLD is also known as FOR A FEW EXTRA DOLLARS, and the title that appears onscreen on this print used here is PER POCHI DOLLARI ANCORA. The most common year used for this production is 1966. Giuliano Gemma (the star of the original RINGO Euro Westerns) plays Confederate officer Gary Hammond, who is being held in a POW camp at the end of the war. Hammond is sent to the Western location of Fort Yuma--he's tasked to stop a group of Southern raiders from attacking the fort. Hammond agrees because the Union knows that the raiders are coming, and the men will be surely massacred. The attack on Fort Yuma is just a ruse, however--the leaders of it really want to steal the gold hidden in the fort while the battle is taking place. Hammond finds this out, among other things, as he fights through various complications to reach his goal.

FORT YUMA GOLD plays more like a traditional American Western. The action scenes are well done, but the movie doesn't have the outlandish elements of most Euro Westerns. What helps the story is the charismatic screen presence of Giuliano Gemma. The movie takes great advantage of Gemma's athleticism--he spends more time engaging in fistfights instead of gunplay. (He also gets to take part in an extensive barroom brawl.) The villains here do not have the bizarre extremism of most Spaghetti Western bad guys. I recognized a few faces from the Sergio Leone Westerns in the supporting cast, but the one other performer that stands out is a cute blonde French actress named Sophie Daumier. She plays a saloon singer who gets involved in Hammond's plight, and her character's name is...I'm not making this up....Connie Breastfull.

There are six different writers credited on the film, and the story does have a patchwork quality to it--about every five minutes something else crops up to keep Hammond from getting to Fort Yuma. The movie was directed by Giorgio Ferroni, under the name of "Calvin J. Padget". He does a serviceable job, nothing spectacular. The music on this print is credited to Ennio Morricone and Gianni Ferrio...according to IMDB, the movie inserted some Morricone tracks on the score just so they could use his name! (If the score was by Ferrio, it's what you'd expect for this type of film.)

The running time for the print on this disc is about 100 minutes. It's nearly impossible to know what the "correct" running time for any Spaghetti Western is, and since I had never seen it before, I have no idea if this is an uncut version. Mill Creek presents the film in 2.35:1 anamorphic widescreen, and the visual quality is okay to mediocre at times. The sound quality is substandard--it is very thin, so thin I had to turn up the volume a few notches. The voice track is an English dub, even though the opening credits are in Italian. There is not an original Italian voice track, or subtitles, or any extras at all--this is a Mill Creek release, after all, and you get what you pay for (I got this Blu-ray for less than $10 from Amazon).

FORT YUMA GOLD is no major discovery, and Mill Creek's presentation of it is rather lacking....but if you are a Spaghetti Western fan you will probably enjoy it--just don't have any great expectations. I'll be covering the other film on this Blu-ray next.
Posted by Dan Day, Jr. at 1:50 PM