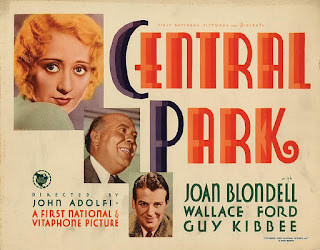 CENTRAL PARK, from 1932, is one of those Warner Bros. films from the early thirties that is short on running time but stuffed with plot. Despite being just short of an hour, there's enough situations to fill about three different movies.

What makes this film stand out is that it is entirely set in the famed New York City landmark. It begins with a montage sequence showing several citizens going about their business inside the park (a camera unit must have been sent to New York for this footage). We then meet a couple down on their luck: Dot (Joan Blondell), who can't find a job on the stage, and Rick (Wallace Ford), who was part of a rodeo show that closed down. The two take an instant liking to each other (as short as this movie is, they can't spend too much time getting to know one another), and it appears that their luck is about to change. Rick makes the acquaintance of a friendly cop (Guy Kibbee), who tips him off about some police motorcycles that need washed, and Dot is chosen to do undercover work for a couple of detectives. Of course, the "detectives" are really some gangsters who intend to use Dot in a scheme to steal money raised for a charity bazaar at the Central Park Casino.

If that isn't enough...the friendly cop has only one week to go until retirement, which means you can probably figure out what's going to happen to him. The cop also has very bad eyesight...which means he can't see the crazed former employee of the Central Park Zoo as he takes vengeance upon an ex-coworker by throwing him into a lion's cage so he can be mauled! The lion winds up getting away, while Rick and the cop chase and battle the gangsters throughout the park.

CENTRAL PARK doesn't have the salacious aspects of most Pre-Code films, but it is rather brutal. The mauling sequence goes on for quite a while, and there's a couple of intense fistfights. There's also a car chase and multiple shoot-outs, in which various police officers are shot and killed.

The sub-plot with the mad ex-zoo employee is rather striking--as played by John Wray (who was one of the murder suspects in DOCTOR X) the guy is so loony he's even sporting a maniacal leer on his wanted poster picture. As Wray goes about his gruesome business against his former co-worker, he laughs and grins wildly, making a potent impression. Surprisingly, Wray's ultimate fate takes place off-screen, and is mentioned as an aside at the end of the film--was there a sequence involving him that was cut out?

Joan Blondell doesn't really get much to do here--she doesn't even have any snappy comebacks to toss off. She's an appealing presence as always, but she's not used to her full advantage. Wallace Ford does well with his ordinary guy character (Rick's rodeo experience winds up coming in handy). Ford would play the same type of role in several much-lower budget movies in his acting career.

Guy Kibbee gets the best part in the film as the affable middle-aged cop. As soon as we know about his situation, we know how he's going to wind up--but Kibbee is still able to make a predictable role likable and even poignant.

CENTRAL PARK was directed by John G. Adolfi, a man I have very little knowledge of. Adolfi did direct a number of films with the distinguished actor George Arliss, and he also helmed Joan Blondell's screen debut, SINNER'S HOLIDAY. (The latter fact makes it even more puzzling why she isn't given more of a chance to shine here.) It's hard to judge Adolfi's talents on this story, simply because it moves so fast and has so much going on in it. None of the characters are well-developed. even Guy Kibbee's cop. There's a sequence in which the lion gets into the Central Park Casino and starts chasing numerous patrons around, but it's put together in a sloppy fashion. Some of the shots certainly look dangerous, but one feels more peril could have been mined from it. (In all fairness, with the state of assembly-line Hollywood film making at the time, Adolfi might have had nothing to do with the sequence.)

CENTRAL PARK is made for movie buffs who have about an hour to kill. Just about every little-known Pre-Code film is now branded as a "unsung classic"--but CENTRAL PARK is an okay time-filler, nothing spectacular. Even Joan Blondell fans might be disappointed that she doesn't have a bigger showcase. It is a reminder of how fast films moved in the early 1930s.
Posted by Dan Day, Jr. at 12:40 PM