On the Fourth of July Turner Classic Movies screened the 1959 historical biopic JOHN PAUL JONES. I was watching the White Sox game at the time, but I caught up with the movie a couple days later.

JOHN PAUL JONES was produced by Samuel Bronston, who is best known for making big-budget epics such as EL CID and THE FALL OF THE ROMAN EMPIRE. Like most of the other films Brosnston produced, most of JOHN PAUL JONES was shot in Spain. The movie was released by Warner Bros. and directed by John Farrow, with Robert Stack as Jones.

Scottish-born American Revolutionary War hero John Paul Jones is a fitting subject for a large scale movie such as this one, filmed in widescreen and color. Jones' real life was filled with all sorts of exciting adventures and conflicts--some historians consider him to be the father of the American Navy.

The cinematic version of Jones' life gets many of the details right, or at least without too much exaggeration. If anything the script tries to cover too much ground, which leaves the film as being rather episodic. The movie goes through so many incidents in Jones' life that none of them wind up as being particularly important or memorable.

We first see Jones as a young boy in Scotland (he throws an egg at a British officer). The naval hero is portrayed as an ornery cuss (he gets into some sort of major argument with somebody about every ten minutes). Robert Stack brings a lot of intensity and determination to the role, but you never really get to know the character, other than he seems ticked off most of the time. An actor with a bit more panache might have made the role more interesting. There's a subplot that has Jones romancing a French noblewoman, but it only just adds to the running time (which is over two hours).

A number of famed historical figures are trotted out during the tale, including Patrick Henry (Macdonald Carey), Benjamin Franklin (Charles Coburn), King Louis XVI of France (Jean Pierre Aumont), and Catherine the Great of Russia (a bizarre cameo by Bette Davis). Jones even travels to Valley Forge to meet with George Washington. The future first President of the United States is only shown from the back--the audience doesn't get to see his face, kind of the way Jesus was portrayed in a number of biblical epics. None of the historical legends, in least in this film, makes a great impression.

The biggest highlight in the movie is the battle between Jones' ship Bonhomme Richard and the British ship Serapis. (I have to admit, though, that the battle could have been staged with much more flair.) What helps this sequence is Peter Cushing, who plays Captain Pearson, the commander of the Serapis. Cushing doesn't play Pearson as a stock war movie villain--the man is shown to be a capable and thoughtful naval officer, and even after battle Jones and Pearson have great respect for one another. As Pearson, Cushing once again is given a chance to show how fitting he looks in period costume. (Actually, Cushing himself would have made a fine John Paul Jones.)  The battle does give Stack the opportunity to recite Jones' legendary quote, "I have not yet begun to fight!" 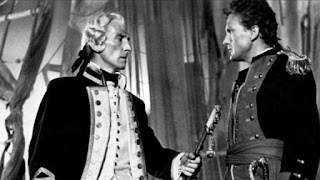 
The movie ends on a bit of a downer with Jones' death after his service in the Russian Navy. One could say the whole movie does not live up to the heights expected of it. It has plenty of pomp and circumstance, and obviously a lot of money was spent on it--but it feels more like a dry recitation of facts instead of a sweeping historical adventure. Director Farrow (who co-wrote the script) presents as many ballroom dance sequences as he does naval battles. The action sequences here are not shot that much differently than the others one sees in innumerable movies set on the high seas. Max Steiner's music score does help a bit.

A real-life historical hero such as John Paul Jones deserves an exciting, fast-paced movie tribute. JOHN PAUL JONES isn't terrible--but it is slow and overlong, and for me just doesn't capture the spirit of the man and his times.