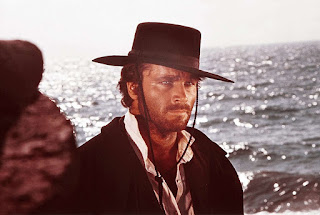 I'm currently reading Troy Howarth's book REAL DEPRAVITIES: THE FILMS OF KLAUS KINSKI. It's a fascinating volume, as Howarth covers all sorts of obscure productions. Klaus Kinski was the ultimate cult movie actor--nothing was mainstream about him, whether he was on or off the screen.

One Klaus Kinski movie that I recently have been able to see for the first time is the 1967 Italian/German MAN, PRIDE, AND VENGEANCE. In some cases the film has been classified as a Spaghetti Western--but in my opinion it is not one. Like most European Westerns, it was made in Spain...but its story is actually set in Spain, not the 19th Century American frontier. In fact, it is a cinematic adaptation of the story that forms the basis of the novel and opera CARMEN.

Franco Nero stars as Spanish soldier Jose, who becomes infatuated with a enticing gypsy girl named Carmen (Tina Aumont). Jose's obsession leads him to kill one of his officers in a fight over the woman. Jose becomes a wanted man, and winds up joining a band of outlaws that Carmen knows...a band that includes her husband Garcia (Klaus Kinski). Jose hopes to steal enough money to allow him and Carmen to go away to North America, but this dysfunctional relationship can only end one way.

MAN, PRIDE, AND VENGEANCE was referred to as a Django film in Germany, to take advantage of the European popularity of the character also played by Franco Nero. If you take a glance at any of the posters for the film, or its trailer, you'd swear it was a typical Spaghetti Western. But if you're looking for the wild action sequences and the outlandish characters and situations the genre is known for, you won't find them here. MAN, PRIDE, AND VENGEANCE is more of a historical melodrama and character study. Director and co-screenwriter Luigi Bazzoni keeps a measured pace throughout the film, taking time to establish the dynamic between Jose and Carmen.

The fact that the character of Jose doesn't come off as weak or pathetic is due in large part to the strong screen presence of Franco Nero. But make no mistake, Carmen definitely holds the upper hand in the relationship. In the beginning of the story Jose is a clean-cut by-the-book soldier, but as he becomes more and more besotted by Carmen he gets scruffier and scruffier (see picture above). Jose's appearance at the end of the movie closely resembles Franco Nero's usual Spaghetti Western persona. At one point a character tells Jose, in reference to his determination to win Carmen, that he is suffering an illness...and the man does have a sort of addiction to the woman. Jose knows full well what kind of woman Carmen is, and how he is destroying himself by going after her--but he literally can't help it. Franco Nero was different than most Spaghetti Western stars in that he could portray great emotional distress in a forceful and believable manner.

Any adaptation of the Carmen story needs a seductive female lead, and Tina Aumont here more than fits the bill. In his Kinski book Troy Howarth mentions that Aumont may have been too young for the role, but I don't think so. She has a spoiled brat quality that fits the character well. As for Klaus Kinski, he doesn't show up until about halfway through the film, and he doesn't stick around too long. He does bring his usual intensity and surly attitude. The revelation that Kinski's Garcia is Carmen's husband is a shock to Jose as well as the audience. Kinski gets to participate in a couple of knock-down drag-out fights with Nero, and these brawls have a rough, disorganized vibe to them.

MAN. PRIDE, AND VENGEANCE has impressive widescreen color cinematography, with several examples of unique and striking compositions. The director of photography was Camillo Bazzoni, the director's brother, and the camera operator was none other than Vittorio Storaro, who would go on to become a legendary cinematographer himself. The atmospheric, Spanish influenced music score was composed by Carlo Rustichelli, and it's the exact opposite from the Morricone type of sound one expects.

MAN, PRIDE, AND VENGEANCE is not an action-packed, over-the-top Euro Western. It is a quite effective historical melodrama, with impressive leading performances. Spaghetti Western fans may find it to be a intriguing alternative.