THIS ISLAND EARTH On Blu-ray From Shout Factory 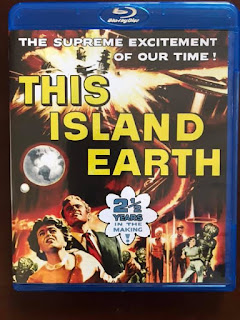 Universal's 1955 THIS ISLAND EARTH is one of the greatest science-fiction films ever made. It's a magnificent, colorful adventure, bigger and bolder than any of the black & white sci-fi features the studio made during the same time period.

It is also never really been given its proper appreciation on home video, and it has undeservedly been the focus of the theatrical version of a snarky TV show. Thankfully Shout Factory--who has been churning out special edition Blu-rays of classic fantastic films like mad recently--redresses the balance.

The Shout Factory Blu-ray of THIS ISLAND EARTH presents the movie in two different formats: one in a 1.85:1 aspect ratio, and another in 1.33:1. There's also two different soundtrack choices: one in original Perspecta Stereophonic Sound, and DTS-HD audio.

Shout Factory says that they have used a new 4K scan of the original film elements, and both aspect ratios look magnificent. I prefer the 1.85:1, especially with the Stereophonic mix, which is very vibrant.

There's a ton of extras on the disc, including a documentary on the making of the film which lasts about 50 minutes long. A short interview with Luigi Cozzi (director of STARCRASH) is featured. In it Cozzi compares THIS ISLAND EARTH to Bram Stoker's tale of DRACULA (and he actually makes a very good case for it). Cozzi unfortunately also brings up the urban legend which claims that director Jack Arnold "saved" the movie in post-production.

There's two excellent audio commentaries by Robert Skotak and David Schecter. Skotak's talk focuses on all the general aspects of the entire production, while Schecter covers the music used for the film.

A "Trailers From Hell" episode on THIS ISLAND EARTH is on the disc, with commentary by Joe Dante. There's also multiple still galleries, with many photos of the famed Metaluna Mutant. (The people who complain how the Mutant shouldn't have been in the film are probably the same people who complain about the demon being in NIGHT OF THE DEMON.) There's also reversible disc cover sleeve art.

This is another outstanding release by Shout Factory, but what makes it even more important is the movie being presented. THIS ISLAND EARTH has deserved this kind of treatment for a long, long time--and it has finally gotten it.
Posted by Dan Day, Jr. at 12:31 PM