Blast From The Past: THE ROCKETEER

With the summer of 2012 being dominated by superhero films at the box-office, maybe it's time to take a look back at a comic-book adaptation that didn't hit it big: 1991's THE ROCKETEER, released by Disney and directed by Joe Johnston. 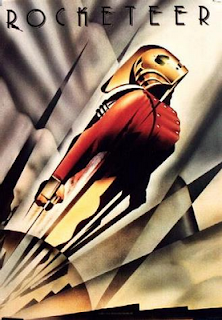 THE ROCKETEER, compared to the "everything but the kitchen sink" mentality inherent in most of today's genre spectaculars, seems almost quaint and understated. That may be one of the reasons the movie did not reach the blockbuster status that Disney was hoping for. Despite the fact that it was given a huge ad campaign, it didn't do all that great money-wise, and today it's barely remembered.

The film (based on the comic-book series by Dave Stevens) tells the story of Cliff Secord, a 1930s struggling stunt pilot who by chance comes into the possession of a top-secret jetpack. Secord's adventures get him involved with gangsters, G-Men, Nazis, and the Hollywood film community. Instead of the slam-bang action romp that audiences may have been expecting, THE ROCKETEER is more of a family-oriented period piece. It does have some nice action sequences, but one gets the feeling that the kids of today wouldn't be all that excited about it.

One reason for a lack of excitement is the film's hero. Bill Campbell is okay as Secord, but the character isn't really all that dynamic. He's portrayed as well-meaning but a bit disorganized--he has problems making a living, he takes his drop-dead gorgeous girlfriend to a cheap burger joint, and he almost causes said girlfriend to get fired from her job. Secord is pleasant and likeable enough, but just about everything that happens to him involves dumb luck--you come away thinking that the jetpack is the hero, not Cliff. The script should have done more to make Cliff more interesting, or given more background on him. At the end of the film, it appears that Secord hasn't changed, or "grown" in any way.

It doesn't help Bill Campbell that he's surrounded by actors who are a lot better than he is. Alan Arkin plays the typical "older mentor" role (comic-book movies always seem to have one). Paul Sorvino is the head gangster (there's a surprise), and Timothy Dalton plays an arrogant movie star who is actually the real villian of the piece. (The role is based on a famous Hollywood urban legend about a well-known film swashbuckler supposedly being a fascist.) The very underrated Terry O'Quinn plays probably the most normal Howard Hughes in movie and TV history.
Jennifer Connelly looks fantastic as Cliff's girlfriend Jenny (the 30s wardrobe more than does her justice). But there isn't really a lot to her character either. As stated before, it's the jetpack--and the Rocketeer suit--that one tends to remember instead of the leading couple.

The film is very well made, and it does have a great 30s atmosphere. This was Joe Johnston's second directorial effort (after HONEY, I SHRUNK THE KIDS) and he handles things very well. The finale involving a Nazi airship is excellent. Johnston was an expert FX technician before he turned to directing so THE ROCKETEER was right up his alley. Unfortunately the screenplay (credited to Danny Bilson & Paul De Meo) doesn't seem to have the qualities to put THE ROCKETEER into classic status. One wonders if the suits at Disney wanted a more "family" type of story. The film was rated PG and does not have any overt violence or bloodshed. The only somewhat "dark" moments the film has involves Timothy Dalton's massive henchman, who is made-up to resemble cult 1940s B movie actor Rondo Hatton. (It's somewhat ironic that an actor was "made-up" as Hatton. Rondo suffered from acromegaly, and didn't NEED monster make-up.)

All in all, THE ROCKETEER is not a bad film. It's certainly worth watching again, or buying on blu-ray. But comparing it to comic-book/action movies made today--even those type of movies made in the same year--one can easily see why it failed to be a huge success, or spawn any sequels (not yet, anyway). The director and the leading couple all went on to bigger and better things--but THE ROCKETEER seems stuck in a limbo. It wasn't grand or overwhelming enough to get major attention, and it wasn't terrible enough to be considered a major bomb. Look at it again sometime and see what you think.