The Dark Knight Has Not Yet Risen

Beginning with the 1966 feature film adaptation of the "Batman" TV series, there have been 9 Batman films released starring 6 different actors as the character. (By the way, I am counting the animated film BATMAN: MASK OF THE PHANTASM. For those that say it shouldn't count...why not?) I think it's safe to say that none of the six actors are considered to be the "ultimate" Batman. If there is an actor that comes to mind when the Caped Crusader is mentioned, it's probably Adam West, like it or not.
Kevin Conroy has actually portrayed Batman more times than anyone. He voiced the character during the entire run of the Batman Animated TV series in the 90s, and he's continued to do so since then in several animated shows based on the DC Comics universe. Of course, the average person doesn't think of Conroy as Batman...but for me, he's about as close as you can get to MY version of the Dark Knight.
But what about the movies? Well...they have their individual moments, and certainly the last three Batman films directed by Christopher Nolan come closer to the "real" comic-book version than the others. Nolan is a very talented director, and he puts together some excellent action set-pieces. If there is a "greatest" Batman film, it would have to be BATMAN BEGINS. Unfortunately Nolan's next two films got longer and longer, with the plots more and more complex. The longer and more complex they got, the more they moved away from the "real" Batman.
The problem with a Batman fan like me is that none of the films seem to hit the total mark. I realize that a film has to be made for a general audience, and not for a bunch of geeky fanboys, but a screenwriter doesn't really need to change a lot of things when given a compelling figure like Batman. The character is almost fool-proof. But that doesn't stop the directors, writers, and producers involved from "re-inventing", or "revamping", or "re-imagining" the Dark Knight's world. Instead of going to the actual comics....or getting someone like Denny O'Neill as an adviser...the films rework just about everything. I know it's the Hollywood Way, but it's frustrating to see a great fictional character with over 70 years of material to work with treated in such a manner.
Having someone like Christian Bale playing the title role doesn't exactly help, either. I've always found Bale to be sort of a dull actor. When I'm watching the recent films, I don't think of Bale AS Batman, I just think of him as a guy PLAYING Batman.
Having said all this, I know that the Nolan/Bale movies have made a ton of money, and despite Nolan and Bale supposedly leaving the series, there will be more Batman films made. It would be nice to see a Batman movie with an unknown actor in the leading role, instead of a "star" leading man who isn't suited to the job. It would be nice to see a Batman movie in which BATMAN is the actual main character, instead of the villians. It would be nice to see a Batman movie without a tacked-on useless romantic subplot (is Warner Bros afraid that if Bruce Wayne doesn't have a girlfriend in every movie, people will think he is gay?) It would be nice to see a Batman movie in which most of the cast DOES NOT find out that Bruce Wayne is Batman....

But what's really nice is having the complete BATMAN: THE ANIMATED SERIES on DVD. 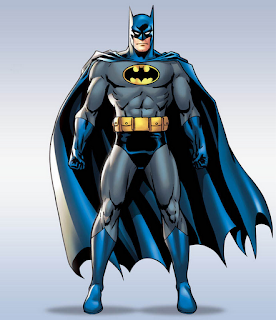