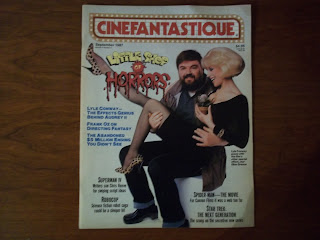 One of the more interesting Blu-rays to be released this year is the Director's Cut of 1986's LITTLE SHOP OF HORRORS. The film was based on the cult Off-Broadway musical, which was based on the cult Roger Corman movie. This version gained cult status for what was NOT put into the theatrical release.

LITTLE SHOP is not an easy film to categorize. It is best described as a musical/horror/dark comedy. It was produced by David Geffen and directed by Frank Oz. A huge amount of money was spent on the production, especially the special effects. The main "Skid Row" set in the film was actually built at Pinewood Studios in England. (It's amazing how much money people will spend to make something look run down.)

The story revolves around geeky Seymour (Rick Moranis), who works at Mushnik's Flower Store. Seymour finds a rather unusual plant, which he names "Audrey II" after the co-worker he secretly pines for (Ellen Greene). Seymour soon finds out that his plant grows on human blood.

Rick Moranis is good as Seymour, but it's Ellen Greene who steals the show (at least among the humans in the cast). Moranis and Greene did their jobs so well that they created the reason why this movie has a director's cut (more on that later). Steve Martin has a small role, and their are a number of celebrity cameos from the likes of Bill Murray, John Candy, Christopher Guest, and Jim Belushi. Martin and Murray are particularly funny but all the cameos are a bit distracting from the main story--one wonders if the producers felt that Moranis and Greene couldn't carry a big-budget film on their own.

Frank Oz is of course best known for his work with The Muppets. He was a perfect choice to helm this project, and not just because of the animatronic work involved. Remember that just about every episode of "The Muppets" had  a couple musical numbers.

The real star is the man-eating plant, called "Audrey II". It was created by SFX artist Lyle Conway, and it's a magnificent piece of work. The plant has different stages of growth, and even winds up talking (the voice is by R & B legend Levi Stubbs). If this story ever gets remade (and yes, there are rumors it will be) the plant will probably be CGI, and it will look terrible. Howard Ashman and Alan Menken wrote the story and music--they both went on to other major projects including several Disney films.

When LITTLE SHOP was originally previewed before it's theatrical release, the story ended just like the play--the lead characters both get killed. Preview audiences liked the performances of Moranis and Greene so much that they reacted negatively to the film's finale. David Geffen and Frank Oz decided to reshoot the ending--Seymour and Audrey live, and Audrey II is destroyed. This was the version that was shown in theaters.

But soon after LITTLE SHOP's release, a number of movie publications such as "Cinefantastique" (see picture above) documented how the original ending also included a show-stopping 15 minute sequence featuring several giant "Audrey II" plants going on a rampage and taking over the world. That sequence soon grew to legendary proportions--to the point were whenever LITTLE SHOP was mentioned, the sequence was always brought up. The original ending became more famous that the film it was cut from, even though no one had ever really seen it completed and finished for the big screen.

The original ending has been available on the internet and was put on an earlier home video version of LITTLE SHOP, but it had never been fully completed or integrated into the actual film until this recent Blu-ray. It's almost like a mini-movie, and it has some brilliant FX work. It's worth buying the Blu-ray just to see this new/old ending.

It's great that both versions are on this Blu-ray, and they both have quality picture and sound. But which version is better? It's easy to see why preview audiences were angry at seeing Seymour and Audrey being killed. The theatrical version of LITTLE SHOP is the more crowd-pleasing one--but the director's cut is really the better movie. LITTLE SHOP is, after all, a dark, satiric comedy. It's also another take on the Faust legend. Seymour makes a deal with the Devil (Audrey II) to gain fame and respect. When you make a deal with the Devil, one way or another, you're gonna have to pay.
You certainly don't want to see Seymour and Audrey die, but it does go with the tone of the story. And the giant plants taking over the world is something that never should have been cut out. (Why didn't the filmmakers think to include it as a dream sequence, to make Seymour realize what he was unleashing on the world?)

The LITTLE SHOP Blu-ray package includes a mini-booklet with photos and info about the film. The Blu-ray extras include some featurettes and commentary by Frank Oz. Kudos to Warner Home Video for putting out both versions of this film. LITTLE SHOP OF HORRORS may not appeal to everyone, but if you have a taste for unusual fare, this film is worth trying, especially to those who are interested in the original ending.