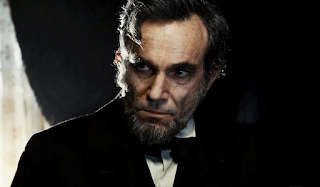 Steven Spielberg's LINCOLN is another triumph for the director, and it will surely be given a number of Oscar nominations. Some people seem surprised that Spielberg made this movie, but they really shouldn't.

When one thinks of Steven Spielberg, the first thing that comes to mind are the many huge box-office spectaculars he has helmed. But he's also directed more historical dramas than just about any contemporary filmmaker--THE COLOR PURPLE, EMPIRE OF THE SUN, SCHINDLER'S LIST, SAVING PRIVATE RYAN, AMISTAD, MUNICH, and WAR HORSE. Even films that are not considered "historical" such as the INDIANA JONES series and CATCH ME IF YOU CAN, deal with a specific time period. One of the great things about movies is that they are able to take you to a time and place that you can never really experience--they are sort of a time machine, if you will. The Hollywood studios of the 1930s-1950s did that better than anyone else, and Steven Spielberg is a descendant of that system.

Spielberg is usually lumped in with his contemporaries--directors such as George Lucas, Francis Ford Coppola, Brian De Palma, and Martin Scorsese. While he has a lot in common with them (most of them were film students who broke into the business in the late sixties), Spielberg isn't really like them at all. He certainly isn't one of the "Raging Bulls and Easy Riders"--he's not a rebel and he's not an experimentalist. Even when dealing with important subjects and/or controversial events, Spielberg is still able to make his films accessible to a mass-market audience. In this way Spielberg fits in more with the old Hollywood studio system than the 21st Century.

Spielberg's real contemporaries are Michael Curtiz, Howard Hawks, and John Ford. Just like those men, Spielberg has worked in just about every type of film genre. He has the ability to change his style for a certain story and film--something Hollywood studio directors had to do out of necessity.
LINCOLN is a perfect example of this. It's an actor's movie, not a director's. There's not a multitude of grand battle sequences or sweeping visuals. In LINCOLN Spielberg gets out of the way, and lets the actors and the story do the work.

If there is one film director working today who could easily fit into the old Hollywood studio system, it is Steven Spielberg. Movie buffs are always saying, "They don't make movies like they used to." Steven Spielberg is one person that does.