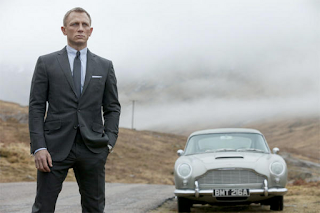 In one of my earlier posts on Timothy Dalton, I mentioned that an actor who plays James Bond has to be appealing to the movie-going public. I then wrote "Daniel Craig is the exception--his Bond is a prick--but that's a post for another day." I went and saw SKYFALL this week, so that day is here.

Daniel Craig's James Bond is so far removed from the template laid down by the other Bond actors that it may be years before Craig's performance can adequately be interpreted. It's almost as if Craig is playing another secret agent named James Bond. First of all, Craig is not a classically handsome leading man...in fact, some people think he's downright ugly (I'm just a straight guy from Indiana, so I'm no judge). The Craig Bond is surly, arrogant, and a smart-ass. The other Bonds were all pretty sarcastic...but actors like Sean Connery and Roger Moore had the ability to say a funny comment and make it seem as if they were speaking to the audience. Connery and Moore gave off the attitude that the audience was with them on their spectacular adventures. You get the feeling that Craig isn't with anybody.

The 21st Century James Bond is a sullen, dour-faced professional killer who makes Timothy Dalton seem like a stand-up comedian. The recent Bond movies play this up by making Craig suffer as much as possible--in QUANTUM OF SOLACE, he's seeking revenge for the loss of the woman he loved; and in SKYFALL, he's suffering from a near-death experience and what he feels is a personal betrayal. When Craig finishes an action sequence, he actually has cuts and bruises on him. (Roger Moore could be chased by bad guys for five miles, then fall off a 100 ft. cliff, and his hair and clothes would still be perfect.)

Even before he landed the role of James Bond, Daniel Craig was considered by critics to be a serious, respected actor. I think of him as a "brooding" actor--no matter what film he's in, or what character he happens to be playing, he always looks like he's ticked off about something. Whether that is great acting skill is up to the eye of the beholder. Craig is a very good actor--probably the best "pure" actor to ever play Bond. But what I think is interesting is that while it seems people accept Craig as Bond,  and they respect his acting ability, it doesn't seem that he's beloved by the fans. All three of the Bond movies Craig has starred in have all made huge amounts of money--but I don't think it's because of him.

When EON Productions acquired the rights to make CASINO ROYALE, they had a once-in-a-lifetime opportunity. They REALLY could start over--not just a reboot, or a remake, or a reworking--they could actually go right back to the very beginning of James Bond. The Broccoli family, to their credit, took that opportunity and did something they should have done back in the 1980s. They decided to start making the Bond movies in a totally different way, with a totally different James Bond. This isn't your father's--or your grandfather's--James Bond. The series now has supporting actors like Ralph Fiennes and Javier Bardem (the days of people like Grace Jones and Denise Richards are long gone) and directors like Sam Mendes. Go to any magazine rack and Daniel Craig is just about on every cover. He even made the cover of "Rolling Stone". (Ten years ago, that publication would have given the latest Bond film a two-paragraph review, if that.) The Bond movies are now being covered and taken seriously by elitist media. Whether Daniel Craig's version of Bond is widely popular or not, the series is now stronger than ever.

What do I think of Daniel Craig as James Bond? Well, I must admit that his take on the character was one I always wanted to see....but I also have to say that sometimes he tries just a bit too hard to be a bad-ass. There's really no way to compare Craig to Connery, Moore, and Brosnan...it's like comparing apples to oranges. Craig had the advantage of being able to start at the "beginning"...if he had debuted as 007 in a "normal" Bond film, it wouldn't have worked. His Bond is unique.

And what of SKYFALL? It's a lot better than QUANTUM, but it's not the greatest Bond film ever made. It goes on a bit too long (does EVERY film made now have to be two and a half hours in length?) For the third Bond film in a row, the villain is a weird, creepy foreign guy who's more silly than dangerous. Javier Bardem is a disappointment...he seems to be auditioning for the role of the Joker in the next Batman production.

In closing, I appreciate Daniel Craig's portrayal of Bond, but I wouldn't say he's the best Bond ever. Now that Craig's Bond has his "own" M, Q, and Moneypenny, it will be interesting to see if the series might go back to some more traditional Bond storylines. Maybe we'll even get to see Craig crack a real smile.