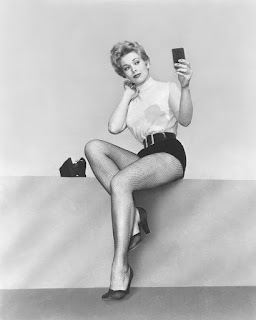 Tonight Turner Classic Movies will be airing an interview filmed last year with TCM host Robert Osbourne and Kim Novak. TCM will also be showing a selection of Novak's movies after the interview.

I've always been a fan of Novak's, mostly because she was the leading lady in one of my favorite films of all time, VERTIGO. The fact that she was pretty hot back in the day certainly has something to do with it as well. Novak's biggest fame was in the 1950s, and she's usually lumped in with the blonde bombshells of the period. But she really shouldn't be, because her image is so different from that group. Stars like Monroe, Mansfield, Dors, etc., were about as obvious as a wart on a nose. Kim Novak had a mysterious, elusive quality about her. It's hard to believe now, but Novak was not Alfred Hitchcock's first choice for VERTIGO--it was supposed to be Vera Miles. Novak was so perfect for VERTIGO, that one cannot imagine anyone else being in her place.

I know some film historians say that Novak as an actress is to cold and distant. What some call coldness I call a depth and intelligence that a lot of other glamorous actresses just didn't have. Novak was drop dead gorgeous but in her movies she never seemed to act like it. To this day I think she's very underrated, especially compared with some of her contemporaries.

Of course VERTIGO will forever be Novak's signature film, but she did very good work in PICNIC, and a great job in a movie no one talks about (or has probably even heard of) MIDDLE OF THE NIGHT. Novak had the thankless task of playing one of Bette Davis' most famous roles in a OF HUMAN BONDAGE remake, and she did fine.

Another reason for Novak being somewhat overlooked is the fact that she lived a very quiet private life, and continues to do so to this day. She had a fairly short screen career, and she didn't die young or become tied to any major scandals. If you are a movie buff, you know how many movie stars had personal lives that were basically train wrecks. It's nice to know that someone like Kim Novak, who had been through the old Hollywood star system, not only survived but went on to a normal and happy life. 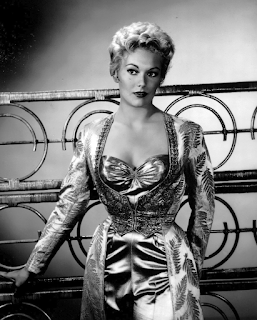