THE PHANTOM OF THE OPERA At The Vickers Theatre 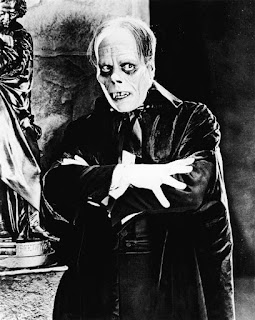 Tonight I went to the Vickers Theatre to see a presentation of the 1925 silent version of THE PHANTOM OF THE OPERA, starring The Man of a Thousand Faces, Lon Chaney. The Vickers Theatre is a historic venue located in Three Oaks, Michigan, a small town situated in the southwestern part of the state. The Vickers specializes in showing independent & critically acclaimed films that usually don't get screened in the local multi-plexes. They used to have a silent film festival every year--hopefully they'll renew that tradition someday. As a matter of fact, the Vickers Theatre was where I saw the silent classic PANDORA'S BOX for the very first time.

What was special about this showing of PHANTOM was the live musical accompaniment by the Andrew Alden Ensemble. The Ensemble is a four-man group consisting of Andrew Alden (composer/keyboard), Andy Cantu (drums/percussion), Beltran Del Campo (Violin/Viola), and Nat Saralamba (electric guitar). These musicians are on a American tour providing live music to silent film classics. Andrew Alden composes original music for each film, and besides the keyboards, he also uses various instruments such as what he calls a "PVC clarinet" (a long piece of PVC pipe with a clarinet mouthpiece). Their music for PHANTOM was somewhat unorthodox, but they did a very fine job. It is kind of refreshing to hear music for a silent film that is non-traditional.

I've watched the silent PHANTOM dozens of times. I consider it Lon Chaney's greatest performance. In the opinion of a goofy looking fanboy like me, Chaney's Phantom is the ultimate romantic hero. There have been a number of versions of Gaston Leroux's story but I still say the Chaney PHANTOM is the best.

For more information on the Vickers Theatre: http://vickerstheatre.com

For more information on the Andrew Alden Ensemble: http://andrewaldenensemble.com
Posted by Dan Day, Jr. at 7:54 PM