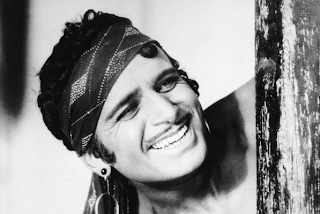 One of the most famous silent films of all time, THE THIEF OF BAGDAD, has been restored and released on Blu-ray by the Cohen Media Group. This version was restored from two 35mm negatives and it incorporates all the color tints and tones of the original release prints. The result is simply outstanding--it's more than likely going to make my Best DVD/Blu-ray list of 2013.

THE THIEF OF BAGDAD was originated, written, and produced by the film's star, Douglas Fairbanks. At the time of THIEF's making Fairbanks was one of the most famous people in the world, along with his actress wife Mary Pickford. Unlike today's "stars", Fairbanks spent most of his personal time keeping physically fit (if you watch THIEF you won't believe that Fairbanks was 40 when he starred in it) and working on various film projects. Even though Raoul Walsh is credited as director, THIEF was Fairbanks' show all the way. He was involved in every aspect of production, and it's obvious that with THIEF Fairbanks wanted to top all his past successes. He was also influenced by the several German Expressionist fantasy films that had been released in the early 1920s.

The story of THE THIEF OF BAGDAD is pretty simple--in the ancient Middle East, thief Ahmed falls in love with a beautiful Princess, and goes through various trials and adventures to win her. The best way to describe THIEF is to compare it to all the 21st Century CGI-filled spectaculars that have flooded the screens recently. THIEF doesn't have the music video-style editing or the junior high school humor of today's movies, but it's loaded with just about every special effect of the period and all sorts of bizarre situations and dangers for Fairbanks to deal with. At 2 and a half hours the movie does have some dull spots, but there is so much to see in every scene, you'll probably won't be bored. THIEF is a pure visual feast--the incredible sets and props, the costumes, the thousands of extras--you have to see this a couple of times just to take everything in.

THIEF's look is due to legendary production designer William Cameron Menzies (who would later work on GONE WITH THE WIND). The settings are astounding--even more so because of the picture quality of the Blu-ray. One can now see (and fully appreciate) the fine detail on all the elaborate costumes. Douglas Fairbanks certainly put his money into the story. Fairbanks wanted to put on a show, and he did that and more.

As for Fairbanks the actor, if you are not used to silent film acting technique, you'll might come away thinking he's way over the top. In a sense he is--but this is an over the top fantasy adventure, and Fairbanks is doing a very stylized performance to match the tone of the film. Julanne Johnston, as the Princess, is maybe the whitest Middle Eastern heroine of all time. Anna May Wong, who portrays the Princess' traitorous handmaiden, would have been a lot better in the role. 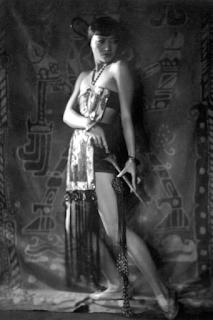 Anna May Wong
Special mention must be made of Anna May Wong. Because of her Chinese heritage, Wong was denied leading-lady roles during her Hollywood career. (Her best showcase is the British film PICCADILLY). Wong wound up supporting several Caucasian actresses who were not as attractive, or as talented, as she was. If you watch THIEF OF BAGDAD, you'll take notice every time Wong appears on screen.

Japanese actor Sojin plays the main villain, the Mongol Prince. I'm sure some will not be happy to know that the villains are played by Orientals, and the heroes are played by white Americans.....but that's the way things were back then. (Have things really changed all that much in movies now?)

I saw THE THIEF OF BAGDAD a while ago, and I've seen bits and pieces of it since. Like most silent movies, even the famous ones, the versions I watched were either missing scenes or the picture quality was not good. This new Blu-ray of THIEF is without doubt the definitive version. It will most likely give THIEF a new life, and hopefully a brand new audience.

The extras include a commentary by Fairbanks biographer Jeffrey Vance. It is very informative, but during the last half of the film Vance begins to lose some steam. There is also a 17 minute video essay written by Vance, featuring several behind-the-scenes stills taken during the production of THIEF.

The Cohen Media Group is new to the home video game, but this fantastic version of THE THIEF OF BAGDAD puts them on a par with Criterion or Kino. It will be interesting to see what Cohen has in store for the future.