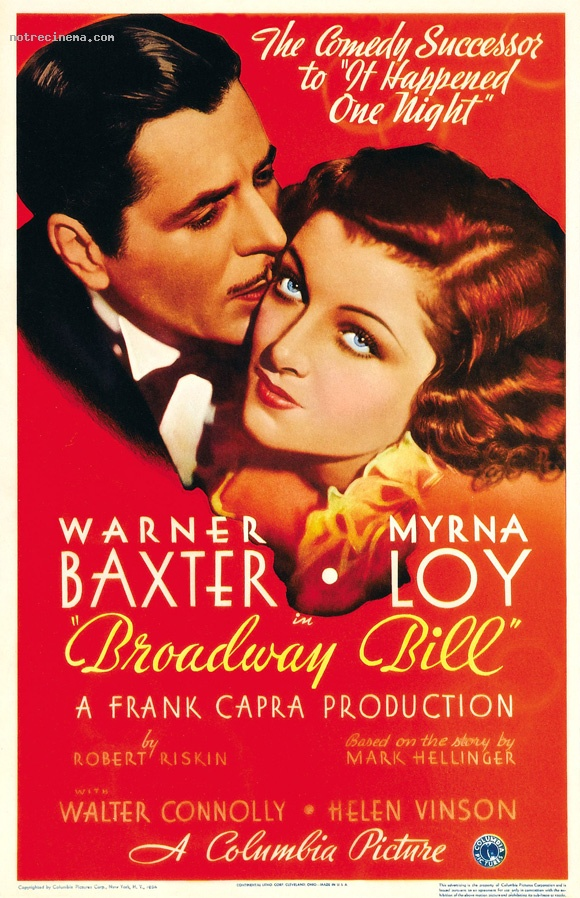 My latest DVD-R purchase from the Warner Archive Collection is 1934's BROADWAY BILL. Why did I get this? Because it was one of the few films directed by Frank Capra that I had never seen.

Out of all the features Frank Capra made during his time at Columbia, BROADWAY BILL may be the most obscure. Capra remade the film for Paramount in 1950 with the title RIDING HIGH, and the original became unavailable to the public for several years. Even today BROADWAY BILL is rarely shown on television and it had been out of print on home video until the Warner Archives released it recently.

BROADWAY BILL was made after IT HAPPENED ONE NIGHT and before MR. DEEDS GOES TO TOWN. It is nowhere near the status of those two films, despite the fact that Capra was working with frequent collaborators Robert Riskin (who did the screenplay) and Joseph Walker (who did the cinematography).

The title BROADWAY BILL refers to a racing horse, owned by Dan Brooks (Warner Baxter). Brooks is married to a daughter of the wealthy Higgins family, and he runs one of Mr. Higgins' factories. Despite his supposed successful lifestyle Dan would rather be back in the horse racing game, and he leaves town with Broadway Bill to try and re-enter the sport. Dan is helped out by his wife's younger sister Alice, played by the ever-adorable Myrna Loy. Alice is secretly in love with Dan, even though there doesn't seem to be a compelling reason why (unless it is an act of rebellion against her snobbish family).

Capra and Riskin try hard to convince the viewer that Dan Brooks is a "regular guy", but he's a far cry from Mr. Deeds and Mr. Smith. For most of the film Dan begs, borrows, and cons from just about everybody he meets in order to finance his horse racing venture. According to Joseph McBride's acclaimed biography of Capra, the part of Dan Brooks was written in mind for Clark Gable. Gable would have been far better in the role--he had the charm and the screen presence to make someone like Dan Brooks appealing to an audience (and if Gable had been cast, it would have been a lot easier to accept Myrna Loy falling in love with the character). Warner Baxter is okay, but he comes off as desperate and irresponsible (it does have to be pointed out that the script doesn't do Baxter any favors).

BROADWAY BILL has a lot of the typical Capra touches, such as a dramatic scene staged during a rainstorm, an impressively edited momentum-building sequence (where Capra shows how a small misunderstanding can lead to a large shift in the odds of an important horse race), and a roster of great character actors including Walter Connolly, Douglass Dumbrille, Margaret Hamilton, Ward Bond, Charles Lane, and Clarence Muse. What it does not have is most of the populist themes which inhabit Capra's more renowned films. At one point in the story Capra and Riskin try to advance the notion that Broadway Bill is the "Horse of the People", because so many ordinary folks have placed small bets on him, but that idea never gets fully developed.

As would be expected the finale features a horse race. It is here that Capra pulls the rug right from under the audience. I won't reveal what happens in the end, but let's just say the climax of BROADWAY BILL is another prime example of how all those "lame old movies" had more complexity than most people give them credit for.

Compared to the rest of Frank Capra's 1930s output, BROADWAY BILL does not hold up too well. It's an okay movie, but it certainly didn't deserve to be remade, and one has to wonder what Capra saw in the project to begin with. No matter how talented a film director may be, he or she cannot make a classic every single time.

The sound & picture quality of the Warner Archives release of BROADWAY BILL is acceptable, but nothing special. There is one extra--an introduction to the film by Frank Capra Jr. (the copyright year on this is 1992!).