The REBIRTH OF MOTHRA Trilogy On Blu-ray 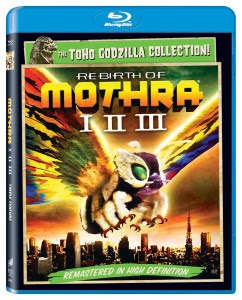 Among Sony's recent Toho Godzilla Blu-ray releases is a set of Mothra films made in the 1990s. Most Americans have probably never seen these--I had not--and I bet a lot of folks didn't even know they existed.

The 1990s Mothra movies are geared more toward younger viewers than the Godzilla series. Each of the three films feature children as the main human protagonists. The stories are more in the realm of fantasy than straight kaiju mashups. But make no mistake, Mothra does its share of heavy fighting. The Mothra featured in this trilogy has a number of special powers that seem to crop up out of nowhere when the creature needs them.

The recurring characters in the series are a family of sister fairies--Moll, Lora, and the trouble-making Belvera. In each film Moll and Lora have to perform the Mothra song to wake up the mighty moth--and they sing other songs as well. This trilogy is almost like a Disney version of Toho's kaiju world. More than likely the "cute" aspects of Mothra set up the series' tone.

The first film in the trilogy actually has two Mothras. The original Mothra dies fighting Desghidorah, a kind of off-shoot of King Ghidorah. However Mothra's egg hatches, and a new creature takes up the fight (this Mothra continues in the rest of the series).

The second film deals with a lost undersea ancient empire. A giant fortress rises from the ocean, and Mothra has to battle a kaiju known as Dagahra to defend it. This movie visually quotes from JAWS, INDIANA JONES AND THE LAST CRUSADE, and even THE TEN COMMANDMENTS. There's also a pair of bumbling adult treasure-seekers who seem straight out of a HOME ALONE movie. In this story Mothra is able to transform into a aquatic Mothra to fight Dagahra underwater.

In the third feature Mothra battles King Ghdorah. At first one would assume that this would be the equivalent of a pitching duel between John Danks and Clayton Kershaw, but the mighty moth holds its own. Mothra decides that it must go back in time to destroy Ghidorah when it is killing off all of Earth's dinosaurs (you didn't know about that scientific fact, did you?). How Mothra is able to time-travel is never explained...nor is Mothra's later ability to transform into a butt-kicking "Armor Mothra".

If you are looking for logical plot developments (and if you are, why are you watching a Toho monster movie?) you're not going to find them in this set. These are movies for young imaginations. Hardcore kaiju fans may find them a bit silly, but these films are a great way to introduce children to the world of Toho.

The picture quality on all three films is okay, and the sound quality is impressive. The only extras are Japanese trailers for each of the three movies. The first REBIRTH OF MOTHRA feature is on its own disc, and the sequels are on another disc.