HEARTS OF THE WORLD At Notre Dame's Browning Cinema 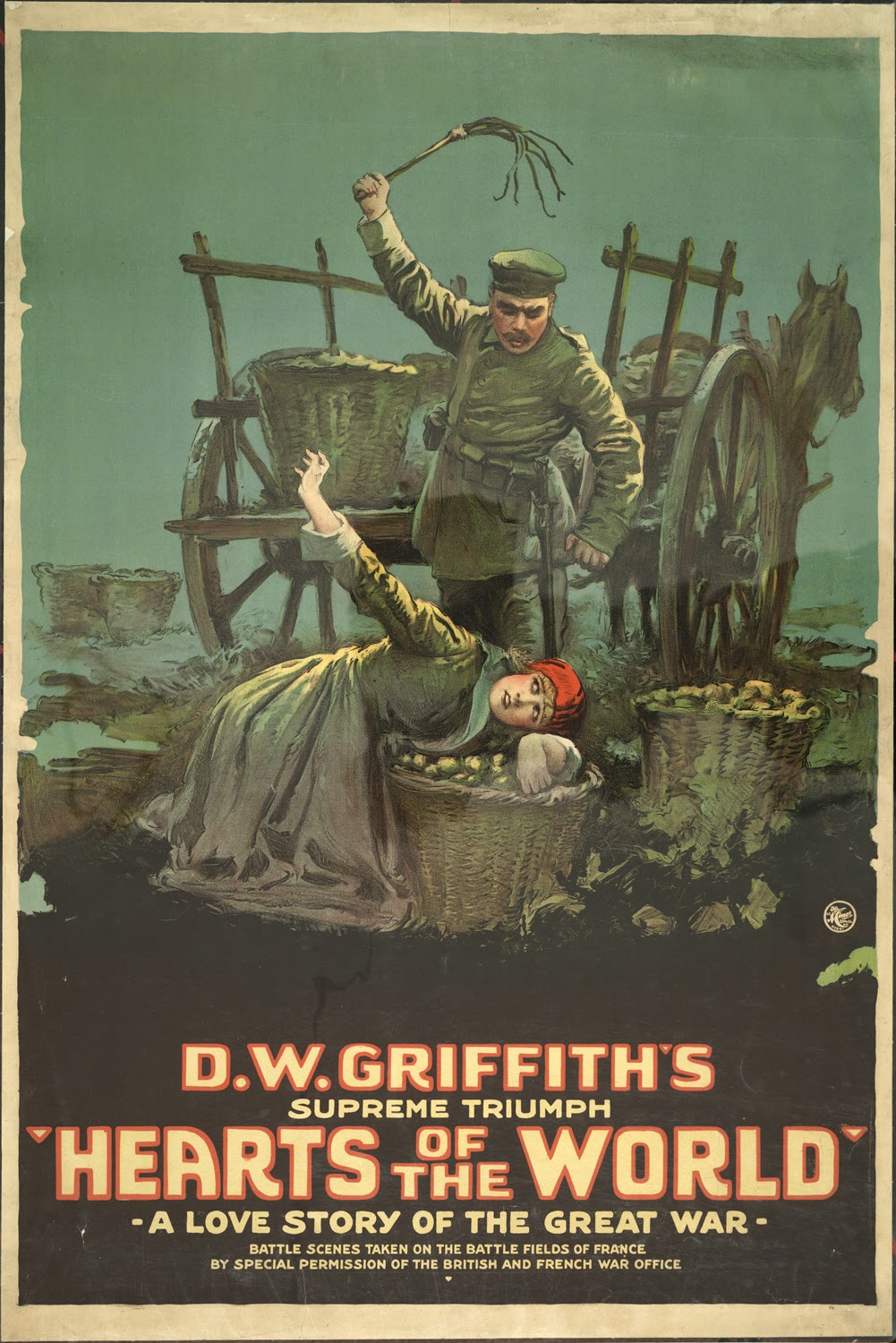 The University of Notre Dame's Browning Cinema has started a new film season with a program of movies based around World War One. Last night D. W. Griffith's HEARTS OF THE WORLD was presented in 35MM with live musical accompaniment.

I respect D. W. Griffith's cinematic accomplishments, but I have to admit I've always found his stories overly sentimental and his characters somewhat one-dimensional. HEARTS OF THE WORLD is no exception. The lead couple in the film are only referred to as 'The Boy" (Robert Harron) and "The Girl" (Lillian Gish). Their families live side-by-side in a French village (which is called "The Village"). The Boy and The Girl are of course smitten with one another, and plan to be wed. But on the eve of their wedding war breaks out, and the boy is called up to serve. The Boy's regiment is posted just outside of The Village, and everyone's bucolic existence is soon shattered by the horrors of battle.

In doing some internet research for this blog post, I learned that the British Government commissioned D. W. Griffith to make HEARTS OF THE WORLD to persuade American citizens to support entry into the war by the United States. (By the time the film was finished and released, America had already entered the war.) Could you imagine what the mainstream media would say if such an arrangement between a country and a American film director happened today?

I also learned that Griffith went overseas with his crew and filmed a number of scenes in Britain and on various sights near the actual Western Front in France. How much of the film was made near the front lines seems to be a point of contention--nearly every source of information I've read gives a different answer.

Griffith also mixed in real footage taken during the war with his staged scenes. HEARTS OF THE WORLD certainly looks realistic--the battle scenes hold up even to 21st Century standards. Despite the heavy melodramatics of the basic plot, HEARTS OF THE WORLD should be seen just for the WWI spectacle alone.

The heavy melodramatics will be familiar to anyone with a basic understanding of D. W. Griffith. The Boy and The Girl are virtuous beyond measure, with Lillian Gish looking and acting like she's about 12 years old. The lead couple are saved from certain death by one of Griffith's famed last-second climaxes. Figuring in this climax is Lillian's sister Dorothy Gish, who plays a spirited French lass. Dorothy Gish's comedic turn with this character just about steals the movie. The moment in the film that impressed me the most was a sequence in which The Girl, disoriented after seeing family members die during an artillery shelling, wanders a desolate battlefield while wearing a wedding veil, searching for The Boy.

The 35MM print used at this showing was not in the best of shape....but hey, how many times can you go and see a D. W. Griffith film shown in an actual theater? The total running time of this print was about 90 minutes. Most of the listed running times I was able to find for HEARTS OF THE WORLD were from about two to two and a half hours. This was the very first time I had ever seen this picture, so I have no idea if anything was missing. The projection speed may have had something to do with the running time--but I did notice that once or twice there were a couple of abrupt jump cuts, so this may have been an edited version of the movie. It is almost impossible to come to an "official" running time for any silent movie, even the more famous ones. The live music for the showing was provided by Notre Dame student Nicholas Van Lieshout on the piano (and he did an excellent job, by the way).

Next week the Browning Cinema will be showing Abel Gance's 1919 WWI epic J'ACCUSE!. I'm looking forward to attending that showing.