BROADMINDED (1931) is a comedy released by Warners-First National and directed by Mervyn LeRoy. Comic Joe E. Brown is the star. What notoriety Brown has today is mostly due to his role in Billy Wilder's SOME LIKE IT HOT, but in the 1930s he top-lined a number of feature films built around his persona. That persona is a bit hard to describe to someone who has never seen or heard of Joe E. Brown...the best way I can define it is the persona of a goofy hick. Brown was also know for his large mouth--and by that I don't mean he was gabby, I mean he really had a physically large mouth.

Joe E. Brown is one of those performers who a person from the 21st Century looks at and says, "How did that guy ever become a movie star??" Nevertheless, he was a star, and he was big enough to rate a top director and two famous writers (Bert Kalmar and Harry Ruby) for BROADMINDED.

BROADMINDED stars out with a prime example of Pre-Code era weirdness. A group of young adults are having a "baby party", where everyone is dressed as a toddler and sucks on baby bottles (presumably filled with Prohibition-style bootleg hooch). Attending the party are rich playboy Jack (William Collier Jr.) and his wacky cousin Ossie (Joe E. Brown). Seeing Brown sitting in a perambulator and acting like a baby is....rather unique.

The party gets raided by the cops, and the raid gets into the next morning's newspapers. Jack's Dad is so sick and tired of his carousing that he decides to send Jack on a long trip--and he assigns Ossie to keep him in line on the way. (What self-respecting rich guy would want Joe E. Brown to look after his son?)

Jack and Ossie travel to California, where they run into a temperamental Latin, played by none other than Bela Lugosi. Joe E. Brown's confrontations with Lugosi are far more interesting than the main plot of the movie (any you can't help but want Bela to strangle Joe). Jack and Ossie then run into a pair of cuties played by Ona Munson and Marjorie White. Munson would gain later fame in playing Belle Watling in GONE WITH THE WIND, and White wound up appearing in the very first Three Stooges short subject for Columbia, WOMAN HATERS.

The foursome wind up at a posh Pasadena hotel, where various complications ensue. Of course the gang run into Bela Lugosi again--along with his wife, portrayed by the Ice Cream Blonde herself, Thelma Todd.

As soon as the statuesque Todd shows up about halfway through the film, the other females in the movie don't stand a chance. Thelma has more screen presence and charisma than just about anyone else in the cast combined (excepting Bela). Ossie and Jack hire Thelma to help Jack get a hold of some incriminating letters--a plan which also involves Thelma walking around in a negligee. As expected, Bela walks in and goes batty (pun intended). But everything works out in the end, and all the guys wind up with their girls...even Bela gets to walk away hand-in-hand with Thelma Todd!

BROADMINDED isn't really that much of a comedy. Writers Kalmar & Ruby penned a number of famous songs and movie scripts for the likes of the Marx Brothers, but BROADMINDED is far from their best work. The real reason to watch this movie, especially for old movie buffs, is the chance to see Bela Lugosi, not that far removed from the filming of DRACULA, playing a comedy role and acting as the husband of the legendary Thelma Todd. I've read for years and years how Bela didn't know English, or American humor very well, but there's no evidence of that in BROADMINDED. Bela's comic timing here is excellent, and when he recites dialogue, he gives the right words the right emphasis.

It's great to see Thelma Todd turn her charms on Bela. One has to wonder what Bela and Thelma thought of one another--and one also has to wonder whether Bela made a pass at Hot Toddy during filming.

BROADMINDED is definitely a picture for movie geeks instead of a general audience. Both Bela Lugosi and Thelma Todd have rabid cult fanbases, so this DVD-R might make some sales. The picture quality on this disc is not bad, but not all that great, either. The only extra is an original trailer for the film. 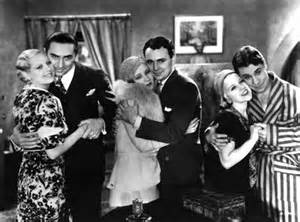