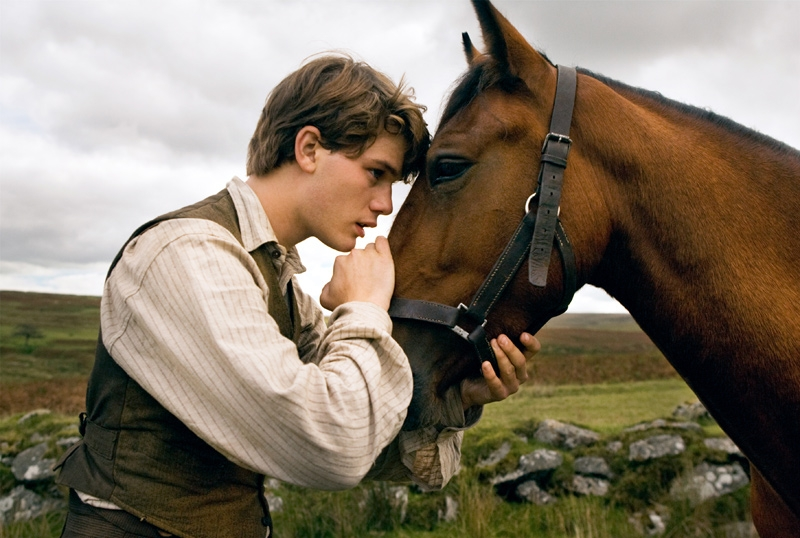 This is the first in a series of blog posts this month on various movies about World War One. I'm going to try to avoid the obvious ones, and cover a few pictures that don't seem to get a lot of attention. If anyone out there has a particular WWI film they wish written about, please leave a message in the comments section.

This series starts out with a fairly recent film: Steven Spielberg's WAR HORSE. The movie was released in 2011 and did decently at the box office, and was nominated for a number of Academy Awards. Yet it seems to me that WAR HORSE did not make that much of a lasting impact, at least compared to most of Spielberg's other work.

WAR HORSE is one of the most visually striking films I have seen in recent years. Spielberg and cinematographer Janusz Kaminski compose some magnificent shots (the scenes set in Devon are simply breathtaking). There's almost nothing that looks as good on the big screen as a galloping horse--just ask Akira Kurosawa and John Ford--and Spielberg takes full advantage of this.

WAR HORSE is based on a children's novel by Michael Morpurgo, which was adapted into a stage play. Young Albert Narracott, the son of a struggling British farm family, becomes attached to a thoroughbred horse named Joey. On the outbreak of World War One, Albert's father sells Joey to a British Calvary Officer, and the horse is transported to France, undergoing a series of incidents during the great conflict.

The story of WAR HORSE is episodic in nature, which means that as soon as the audience gets used to a set of characters, another set comes in when Joey's situation changes. The real star of the film is Joey--Jeremy Irvine is fine as Albert but most of the rest of the cast get very little chance to shine due to their roles being so small. Tom Hiddleston and Benedict Cumberbatch, who are now known for other things, appear in WAR HORSE, but they are probably almost unrecognizable to even their most rabid fans.

I remember reading some reviews when WAR HORSE came out that accused the film of being sentimental and emotionally manipulative--but what Steven Spielberg film isn't? WAR HORSE has a very old-fashioned feel to it--it seems like it was made in the 1940s-1950s instead of the 21st Century. If you take WAR HORSE too rationally you most likely will not enjoy it. It definitely works best with a viewer who has an "old movie buff" sensibility.

As for the film's approach to WWI....some might be disappointed that it takes a while into the movie before the war scenes start, but that's because Spielberg is trying to establish the relationship between Albert and Joey. Spielberg is also showing as much of the bucolic English countryside as he can to set up a contrast between it and the everyday horrors of WWI.

Once the war starts, we see a magnificent cavalry charge--which ends with the riders being mowed down by machine guns (an obvious example of the movie showing how WWI was a "modern" war). There's an impressive "over the top" charge, which has some similarities to the opening sequence of SAVING PRIVATE RYAN. There's a gas attack, and a very nightmarish representation of No Man's Land. The war is shown through the eyes of British, French, and German characters, but it is mostly shown through the eyes of Joey.

WAR HORSE is not what one could call a realistic, documentary-like film about World War One. The war is really more of a backdrop for a heartwarming story between a young man and his horse. I think WAR HORSE would be considered more of a classic if it wasn't for cynical 21st Century audiences. In my opinion it is the best film Steven Spielberg has made in a while, and it truly is one of those films "they don't make anymore".