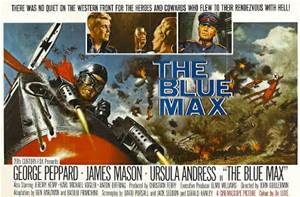 The title of THE BLUE MAX (1966) is actually the nickname for the Pour le Merite, the highest order of merit in the German Empire during the period of World War One. Contrary to popular belief, the award was not just for aviators--Erwin Rommel was awarded one--but it has always been associated with German flying aces.

The main character of THE BLUE MAX is Bruno Stachel (George Peppard), who is obsessed with winning the Pour le Merite. Stachel is a former infantryman who has transferred to the German Army Air Service in 1918. The working-class Stachel rubs his fellow pilots the wrong way almost immediately by not disguising his quest for personal glory. (If Bruno Stachel was a baseball player, he would be the type of guy who cared more about his stats than his team.)

Bruno Stachel is a unusual choice to be a leading character in a epic historical war film made for English-speaking audiences. First of all, he's German--and he's not what one would call a "good" German. If you are any sort of a film buff you know what a Good German is. Just about every WWI or WWII picture has one--he's the guy who expresses doubts about his country's actions, or gives the Nazi salute in a half-hearted manner. Stachel isn't a good or bad German--he's a self-centered sourpuss with a chip on his shoulder. Stachel has no problems with war or killing, or his country's role--all he wants to do is get as many "kill" credits as possible so he can prove something.

Needless to say, someone like Stachel is not going to be very attractive to the average viewer. Stachel's flying exploits come to the attention of a General (James Mason), who picks the young man as someone who can be trotted out as a hero to war-weary German civilians back home. Stachel enters into an affair with the General's much younger trophy wife (Ursula Andress). The couple are made for each other, since the General's wife is just as self-centered and cold-blooded as Stachel is.

Stachel does get his comeuppance in the end, but the climax doesn't have the emotional impact that it should, simply because the viewer doesn't like Stachel and doesn't care what happens to him.

What makes THE BLUE MAX exceptional are the film's spectacular flying scenes, directed by Anthony Squire. Most of the planes used were customized to look like WWI flying craft, but still, those are real planes flying around, and the end result is amazing even when one looks at THE BLUE MAX today. When it comes to the technical details and the battle scenes, THE BLUE MAX has to be rated as one of the best WWI films ever--at least in those departments.

Most of THE BLUE MAX was filmed in Ireland, and the movie has a overcast, dreary look about it. No doubt that was due to the Irish weather, but the gloomy atmosphere does fit the outlook for the German military in 1918. We're even shown a bit of home front life in 1918 Berlin, something which is almost never portrayed in a WWI movie. THE BLUE MAX features standout cinematography from Douglas Slocombe and an excellent music score from the legendary Jerry Goldsmith.

Director John Guillermin certainly had a lot to work with in this film....but one thing he wasn't able to do was make the audience care about the characters. George Peppard is very good at playing a jerk...perhaps too good. It is inferred that Bruno Stachel acts the way he does because he's working class, but Bruno appears more aloof and aristocratic than his supposed higher-class comrades. Ursula Andress looks stupendous (she probably was the most beautiful woman in the world in 1966), but emotionally she's just like Stachel. James Mason gives a bit of class to the proceedings, and it's interesting that Mason shares scenes with Karl Michael Vogler, who plays Stachel's commander. Both Mason and Vogler played Erwin Rommel in different films. Anton Diffring, who must have played German WWII officers dozens of times in his acting career, this time gets a chance to play a WWI officer. THE BLUE MAX also has a "cameo" from none other than the Red Baron himself, Baron von Richthofen (played by Carl Schell).

THE BLUE MAX is certainly a worthy film to watch if one is interested in the subject of World War One. The flying and battle scenes are a must-see....but the movie falls short of being great because the leading man is so unlikeable.
Posted by Dan Day, Jr. at 10:57 AM