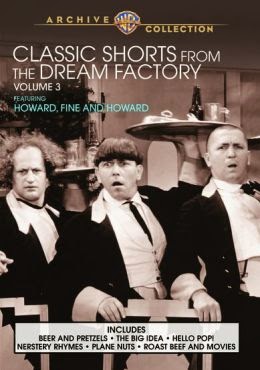 The actual title of this Warner Archive Collection release is CLASSIC SHORTS FROM THE DREAM FACTORY VOLUME 3. I assume that the WAC wasn't able to use the name "The Three Stooges"--which is fitting, because in these short subjects, Moe Howard, Larry Fine and Curly Howard were not officially called that yet.

These shorts were produced at MGM in 1933 when Moe, Larry, and Curly were still working with vaudevillian Ted Healy. This DVD-R marks the first time all five of the Healy-Stooges MGM shorts are available together, thanks to the recent discovery of a print of HELLO POP!, which had been considered lost.

If you are watching these shorts for the first time, please note that they are very different from the legendary work the Stooges did for Columbia Studios. The Stooges are supporting players here....Ted Healy is the headliner, and for the most part Bonny Bonnell (who was Healy's girlfriend at the time) gets more screen time than Moe, Larry, and Curly do. All the shorts (except for BEER AND PRETZELS) have musical numbers from other MGM feature films edited into them. These numbers are nothing to get excited about, and their appearance in each short usually brings whatever action there is to an abrupt halt. The Stooges get very little chance to shine, and the comedy in each episode winds up being more strange than funny.

The five MGM Healy-Stooges shorts are:

PLANE NUTS: What makes this short notable is the fact that it is basically a filmed version of Ted Healy's stage act. A number of the gags here will be performed by the Stooges in different variations for the rest of their careers. It's interesting to watch the interplay between Healy and the "boys"--even though Moe at this point is subservient to Healy, he's already pulling rank on Larry and Curly. I wonder if the lack of a real audience reaction might have thrown the timing off on some of the jokes.

THE BIG IDEA: This is the least of the collection. Ted Healy is an "idea man" trying to come up with (you guessed it) The Big Idea, but he keeps getting interrupted by such nuisances as the Stooges. Trust me...it's not as funny as it may sound.

BEER AND PRETZELS: The best of the MGM Stooge shorts by far. BEER AND PRETZELS plays very much like a Stooges Columbia short--Healy and the Boys lose their jobs performing at a theater, so they obtain work as nightclub waiters. Of course they are totally unsuited for the job, and they wind up wrecking the place. The musical numbers here are actually integrated into the story, and Moe, Larry, and Curly all have some nice moments (Curly even gets to play the spoons). One has to wonder if someone at Columbia saw this short and had it in mind while the Stooges started working there.

NERSTERY RHYMES: In this short the Stooges play Healy's children, who pester their Dad to tell them a bedtime story. NERSTERY RHYMES was filmed in two-strip Technicolor....but the color has faded badly, and everything looks either light blue or light pink. Seeing the Stooges presented this way is....unique. (I believe that Moe was once quoted as saying "We're twice as ugly in color than in black & white.") There's definitely a Pre-Code vibe going on in this one--Ted wants to get away from his kids so he can hit the beer joints with "good fairy" Bonny Bonnell.

HELLO POP!: A print of this short was discovered last year in Australia, and old movie buffs rejoiced at the news--especially since this was also filmed in two-strip Technicolor. It's more historical curiosity than prime entertainment, however. Ted Healy is running a stage show and the Stooges, once again playing his children, keep bugging him. Like NERSTERY RHYMES, the color for this film has faded badly. Whenever it seems that the story might start getting amusing, one of those mediocre musical numbers from another movie shows up.

There's one more short featured in this collection--ROAST BEEF AND MOVIES, which was made at MGM at the same time as the others. This one has Curly (billed as Jerry Howard) teamed with two other comedians named George Givot and Bobby Callahan. Curly fans will be disappointed to find out he doesn't have much to do in this short, and other than the novelty of seeing Curly without Moe and Larry, there's really not much else to recommend about it. ROAST BEEF AND MOVIES was also filmed in early Technicolor.

Some of these shorts have been released on home video before--PLANE NUTS and ROAST BEEF AND MOVIES are included as extras on the Warner DVD of DANCING LADY, and BEER AND PRETZELS is shown in its entirety on the Warner Archive release of Leonard Maltin's documentary THE LOST STOOGES.

This collection is best suited for movie buffs and hardcore Three Stooges fans. None of the shorts ranks anywhere near the typical Stooges Columbia film, and most viewers of today will not be too impressed with the comedy or the musical numbers. At first glance one has to wonder why MGM used--or mis-used--the Stooges as they did.....but one also has to remember that Ted Healy was the headliner, and the Stooges were brought along with him. Moe, Larry, and Curly had already left Healy by the time the last of these shorts had been released in theaters. We all know how their careers turned out.

As for Ted Healy, he found his true niche as a wisecracking supporting player in a number of famous  features such as MAD LOVE and SAN FRANCISCO. Healy died in 1937 at the age of 41 under mysterious circumstances. A new Healy biography written by Bill Cassara (which I have not read yet) is supposed to shed new light on the performer's life and death.

If you are just a casual Three Stooges fan (in other words, the type of person who would never watch a Shemp short) you might want to pass on this. But if you want to know more about the Stooges and how they developed, this is a nice volume to have. And if you do order it from the Warner Archive Collection, you might as well go ahead and order the aforementioned THE LOST STOOGES if you don't already have it. Written and narrated by Leonard Maltin, THE LOST STOOGES gives great detail and insight into the short time Moe, Larry, and Curly spent under contract at MGM.