MY DARLING CLEMENTINE From Criterion 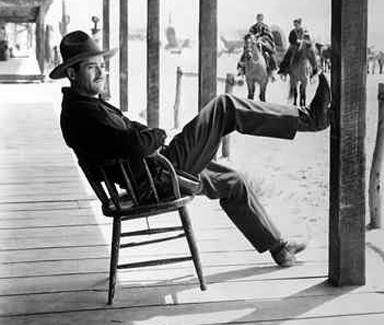 MY DARLING CLEMENTINE can best be summed up by looking at the famous still of Henry Fonda as Wyatt Earp, balancing himself against a post (see above). Despite the fact that the story revolves around one of the most famous gunfights in history, MY DARLING CLEMENTINE has an extremely low-key attitude about itself--so much so that 20th Century Fox head Darryl F. Zanuck did some major revisions to the film before its general release.

John Ford told a number of interviewers over the years that he knew the real Wyatt Earp, and Earp supposedly told Ford the real facts about the O.K. Corral incident. Whether Ford ever met Earp or not, MY DARLING CLEMENTINE is about as historically accurate as THE THREE STOOGES MEET HERCULES. Henry Fonda plays the most noble Wyatt Earp in cinema history (the real Wyatt Earp was the type of person Henry Fonda would have wanted to run out of town). MY DARLING CLEMENTINE is a prime example of John Ford's "Print the Legend" concept.

And make no mistake, this is a legendary film. An entire "town" representing Tombstone was built right outside Ford's beloved Monument Valley, making every location shot in the movie look spectacular. As usual in a Ford film, there's a huge (and memorable) supporting cast, including Ford regulars Ward Bond, Jane Darwell, Russell Simpson, and Grant Withers. Victor Mature, in an unusual bit of casting, gets the best role of his career as the self-destructive Doc Holliday. Walter Brennan is a dangerous and deadly Old Man Clanton--unfortunately Brennan didn't like Ford very much and the actor never worked with the director again. Linda Darnell plays another of her "doomed bad girl" roles, the sultry Chihuahua (try naming a female character that now). The Clementine of the title is portrayed by Cathy Downs. Despite her importance, Clementine does not appear in the film until about a third of the way through, and the character is more a symbol than a real woman.

In the lead role Henry Fonda gives what may be his ultimate Western performance. To be in a Western, and not stick out like a sore thumb, is not an easy trick for any actor. Fonda is so right in this movie that you feel like he's not even acting--he's being (that may be the best compliment one can give to a film star). By the way, if you are interested in seeing Fonda play the "real" Earp, check out his role in WARLOCK.

The Criterion Blu-ray of MY DARLING CLEMENTINE contains two versions of the film, just like the Fox DVD which came out a while ago. There is a 103 minute "Preview Version", which has more of those famous "Fordian moments". It is not really a "Director's Cut"....that version more than likely doesn't exist. I prefer the 103 minute version to the 97 minute theatrical version, simply because it is more of what John Ford intended. The 97 minute version on this Blu-ray looks stunning--like all other Criterion black & white releases, the picture quality is as sharp as a knife. This Blu-ray really brings out the outstanding cinematography of Joseph MacDonald. I have always been of the opinion that you can freeze-frame the picture on any John Ford scene and you will have a great painting. MY DARLING CLEMENTINE is filled with an entire gallery of beautiful images.

There's a number of extras on this Blu-ray. The 97 minute version of the film has an audio commentary by Ford biographer Joseph McBride. It is a very good one, filled with pertinent background material. A 40-minute program comparing the two versions of the film by Robert Gitt has been carried over from the old Fox DVD. This program explains the various changes that Darryl Zanuck did to Ford's work. There's a short interview with western historian Andrew Isenberg on the real Wyatt Earp, and a video essay by Ford scholar Tag Gallagher. Also included are vintage news features on the town of Tombstone and Monument Valley, liner notes by David Jenkins, and a 1947 radio adaptation of MY DARLING CLEMENTINE starring Henry Fonda.

The neatest extra is a 1916 silent short called A BANDIT'S WAGER. This short was directed by and stars Francis Ford, John Ford's brother. (It was Francis Ford who got John Ford started in the movie business.) The short also features John Ford himself as the heroine's brother. Francis Ford was a big Western star during the silent days but he fell on hard times as his brother's career got bigger and bigger. In later years John Ford would almost always cast Francis in small roles--usually as an unkempt comic drunk (he appears in such a role in MY DARLING CLEMENTINE). Seeing Francis Ford as a vibrant leading man, and a very young John Ford as an actor, is a real treat.

You can never praise Criterion's product too highly. The Blu-ray of MY DARLING CLEMENTINE is a must-have for Western film fans and John Ford buffs.