I've had a lot of great geek moments in my life....but perhaps the greatest geekiest moment of them all has to be my attendance at the October 2014 Monster Bash in Mars, Pennsylvania. This was a Hammer Films-themed Bash, with an incredible lineup of Hammer leading ladies.

The legendary Hammer hotties were Caroline Munro (DRACULA A.D. 1972, CAPTAIN KRONOS VAMPIRE HUNTER), Martine Beswicke (PREHISTORIC WOMEN, DR. JEKYLL AND SISTER HYDE), Veronica Carlson (DRACULA HAS RISEN FROM THE GRAVE), Yvonne Monlaur (THE BRIDES OF DRACULA), and Suzanna Leigh (THE LOST CONTINENT). And there were other famous guests as well: Elizabeth Shepherd (THE TOMB OF LIGEIA), Martin Stephens (VILLAGE OF THE DAMNED, THE INNOCENTS), and Vincent Price's daughter Victoria.

To coincide with the Hammer theme, a number of the studio's films were screened during the bash, such as THE GORGON and HORROR OF DRACULA. Of course I have all the films that were screened on home video, and I've seen them dozens of times....but it was still cool to see them with an actual audience.

A number of Hammer's most famous monsters, such as the Snake Woman from THE REPTILE and the Christopher Lee creature from THE CURSE OF FRANKENSTEIN were re-created thanks to the wizardry of makeup artist Ron Chamberlain (see picture below). 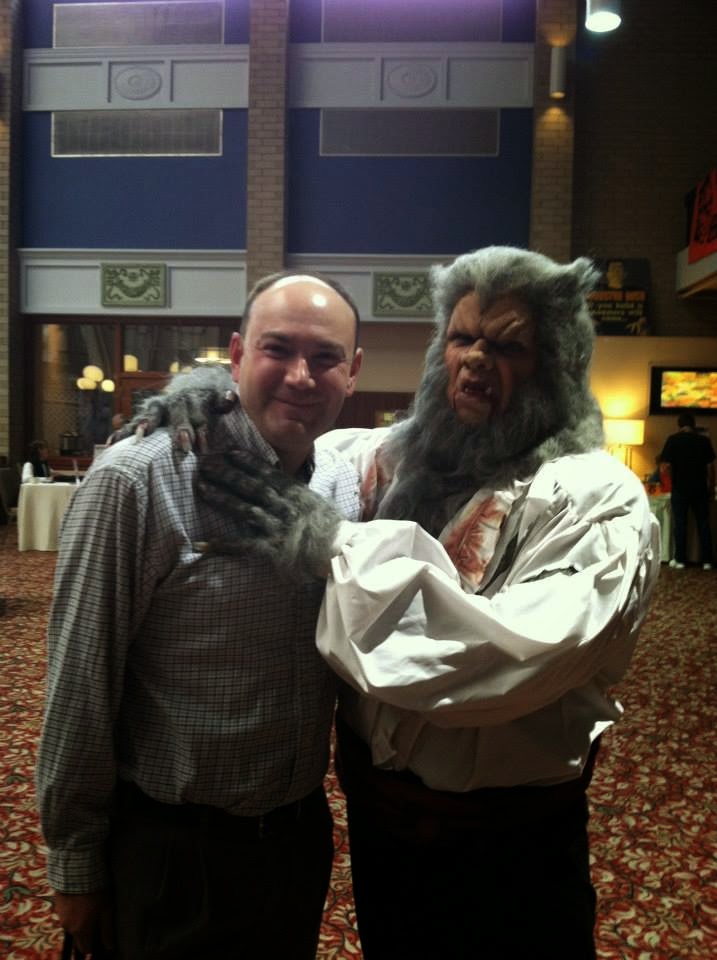 I told Ollie to stay away from the hotel bar.....

What really made this Monster Bash special was that I shared a hotel room with independent filmmaker Joshua Kennedy (THE MENACE WITH FIVE ARMS). Both of us were like kids at Christmas--and Josh got to do something totally amazing--but I'll get to that later.

One of the prime features of any Monster Bash are the Q & A sessions, where the special guests talk about their careers and their memories. Josh and I got to see programs featuring Caroline Munro, Martine Beswicke, Veronica Carlson, Yvonne Monlaur, and Suzanna Leigh. All of these women went out of their way to express their admiration and love for Peter Cushing. I know that there are some people out there on the internet who hold the opinion that they are tired of hearing all those "Peter Cushing was wonderful " stories. The man was not perfect--no one is. But there's a reason why so many of Cushing's contemporaries profess such love for him--he really was a decent man, and that is something these ladies made sure to reinforce.

Josh and I also got to witness Elizabeth Shepherd, the cinematic Ligeia, give a live reading of Poe's story of "Ligeia". It wasn't just a straight reading....it was a magnificent performance, and I told the lady herself she should record it for posterity. 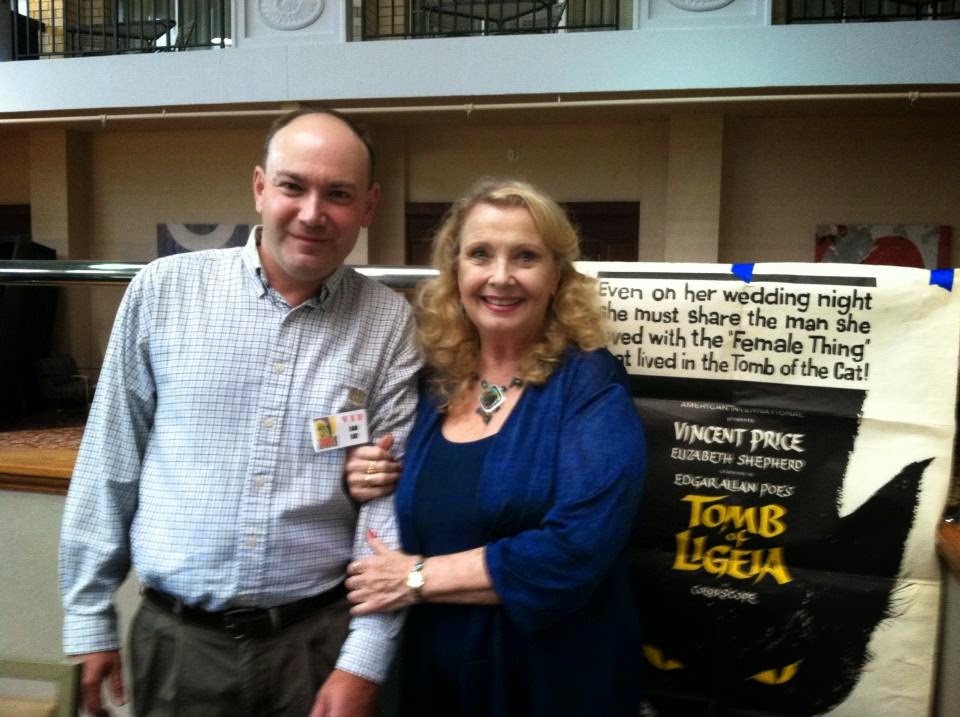 We also experienced Victoria Price's multi-media presentation on her father Vincent's life and legacy. The presentation was poignant, moving, enlightening....and funny. Victoria is truly as eclectic as her father. Josh got a big kick out of the fact that Victoria and I were involved in a serious discussion on baseball. Victoria also signed my copy of the biography she wrote on her father (a book I highly recommend, by the way). 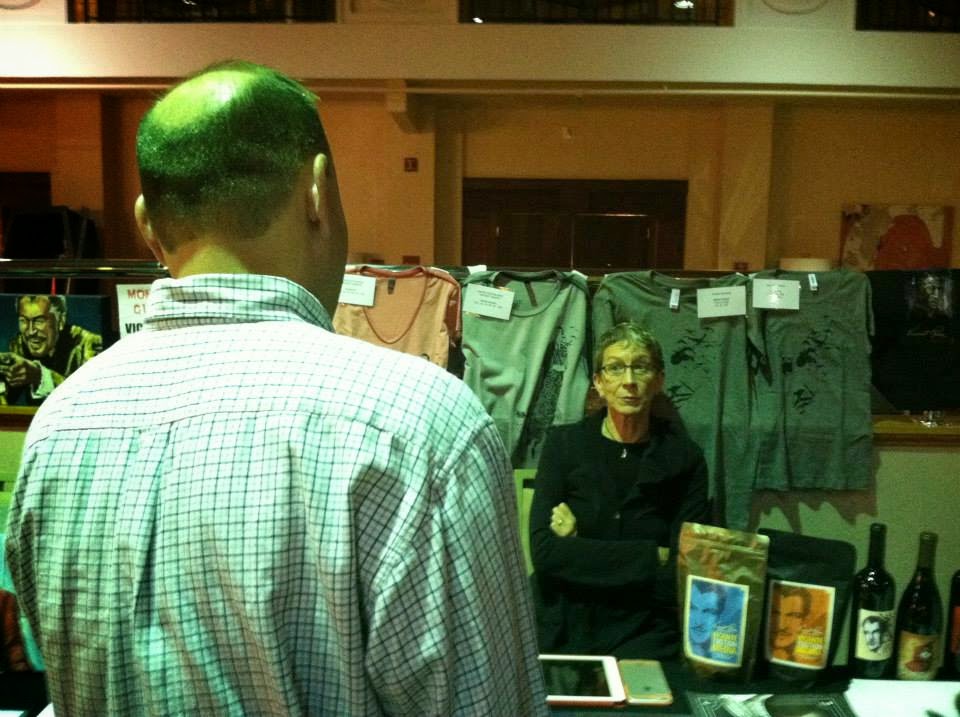 
Josh and I also got to personally talk with all the Monster Bash guests--and we learned such things as the fact that Martin Stephens, during his role as the lead creepy kid in the original VILLAGE OF THE DAMNED, played co-star George Sanders in chess--and beat him. Suzanna Leigh told us about the difficult relationship between her Godmother Vivien Leigh and Laurence Olivier. And all the Hammer hotties treated us like family, not goofy fans.

There is one particular Hammer hottie that has a special place in Josh's heart, and that is Martine Beswicke. Once Josh found out that Martine was going to be at the October Monster Bash, he decided that he would try and see if he could get her to consent to film a video with him. Thanks to the help of the lovely Tami Hamalian....he actually made it happen!!! Here's the link for the video: http://youtu.be/ViVh6NOM6aw. I had a rather insignificant part in all of this....but I was proud and honored to see Josh's dream come true. Martine Beswicke could have easily just brushed Josh off, or patronized him...but she got into the true spirit of the venture, and proved to be an excellent sport. 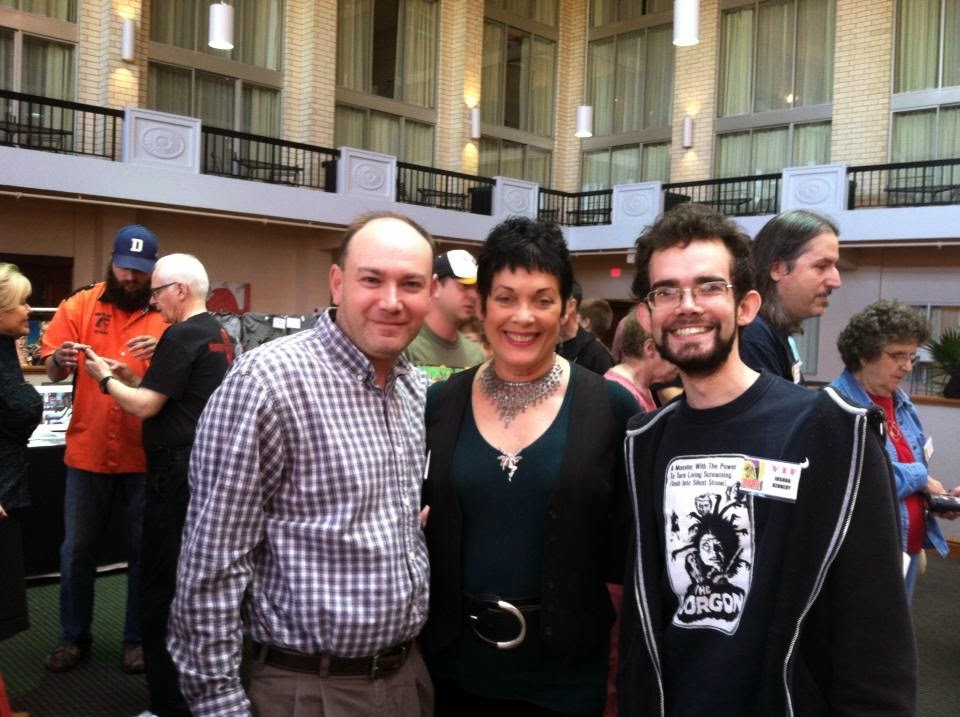 Me with Martine Beswicke and Josh Kennedy

I had one of the best times of my life at Monster Bash. Meeting Josh in person was fantastic, and restorative...simply because Josh has an upbeat, enthusiastic personality, a rarity among someone his age. His love for fantastic cinema is just like mine. It is love of imagination and creativity, a love of wonder and adventure.

The other major feeling I had after leaving Monster Bash was validation. I've been watching Hammer movies most of my life, and I've spent a great deal of money on Hammer-related products. To meet so many women who starred in Hammer features, and to find out that they are charming, kind, and real--gives me inspiration. All those "dumb old monster movies" that I've watched are NOT wastes of time--they've lead me to experiences I never would have had otherwise. These ladies that I've met are true icons of fantastic cinema, yet they have all treated me as a friend.

Certainly the low-key atmosphere of Monster Bash plays a part in that. Ron Adams and his team do a wonderful job in running the Bash and making the fans happy. I don't know if there will ever again be a lineup at Monster Bash like October 2014, but I look forward to making new memories. 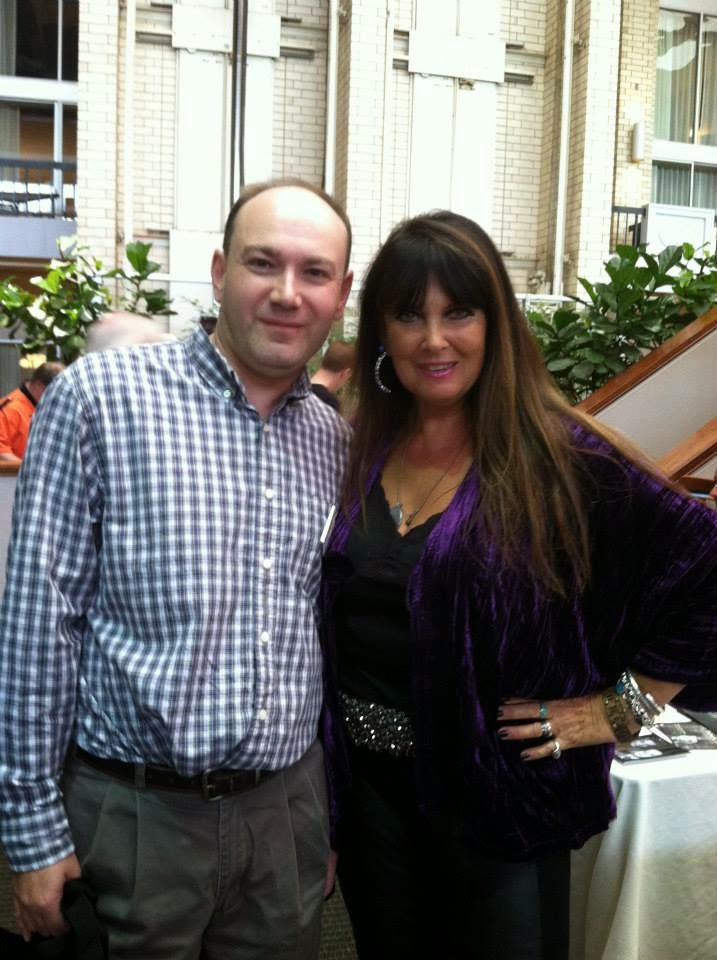 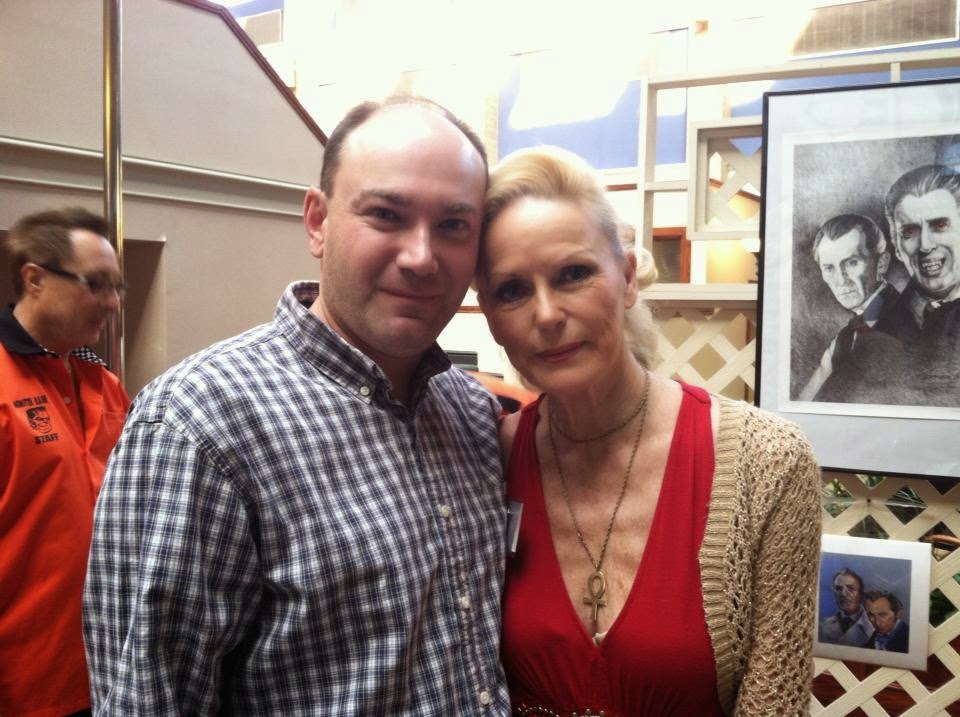 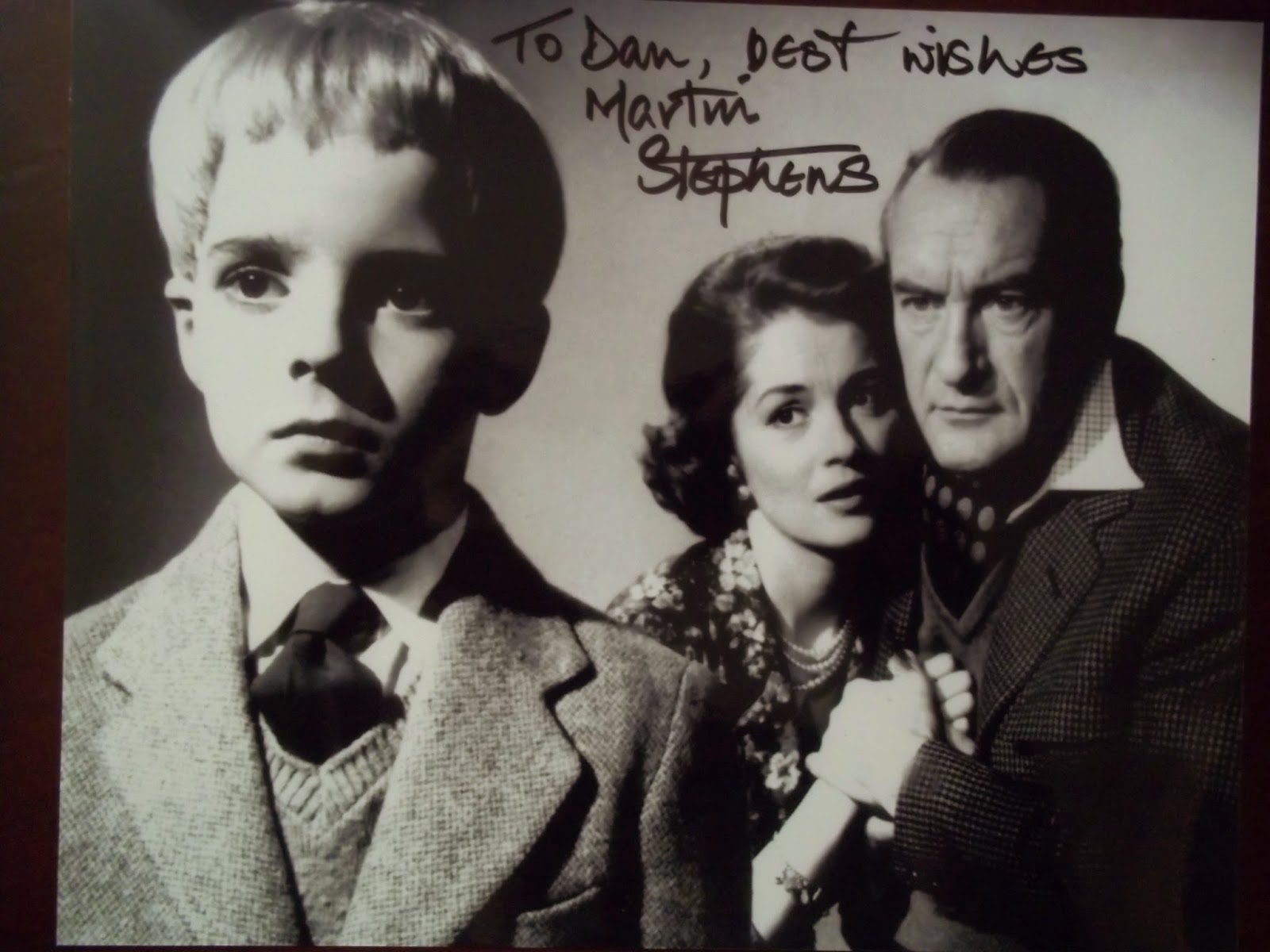 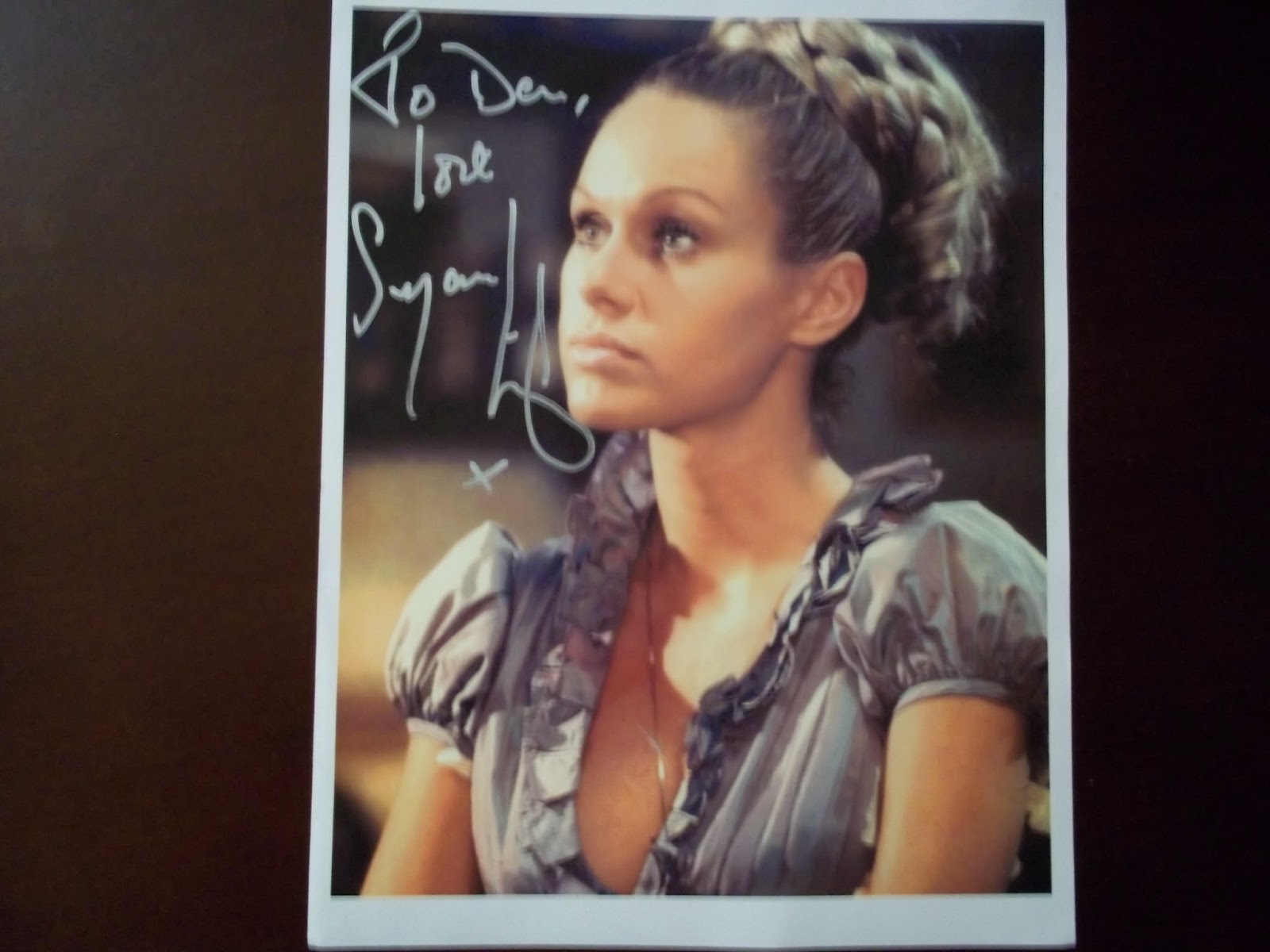 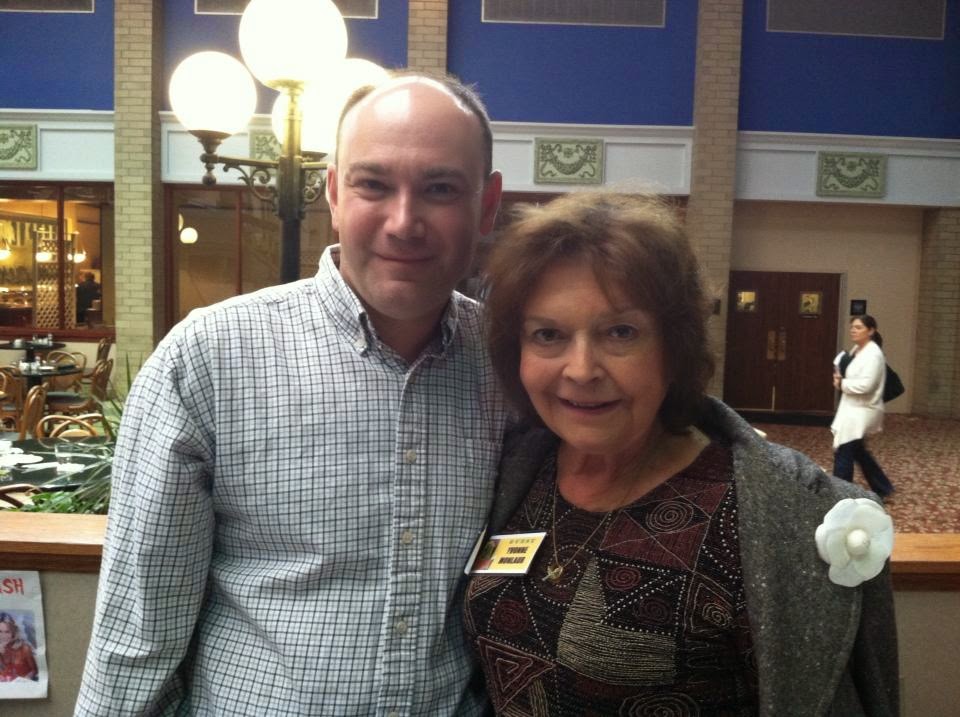 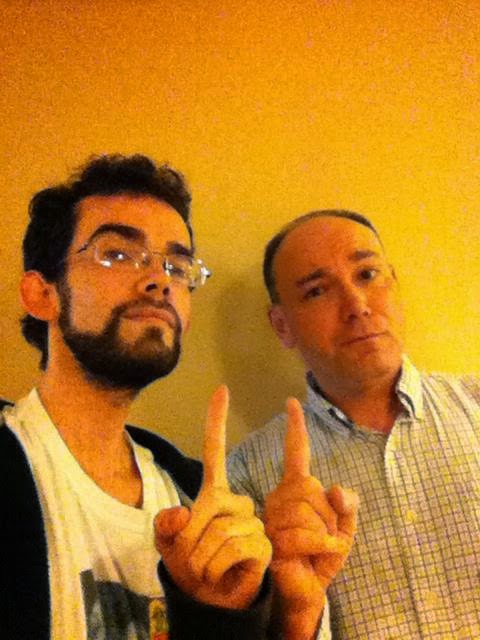 Josh Kennedy and I doing the Cushing finger!
Posted by Dan Day, Jr. at 3:42 PM