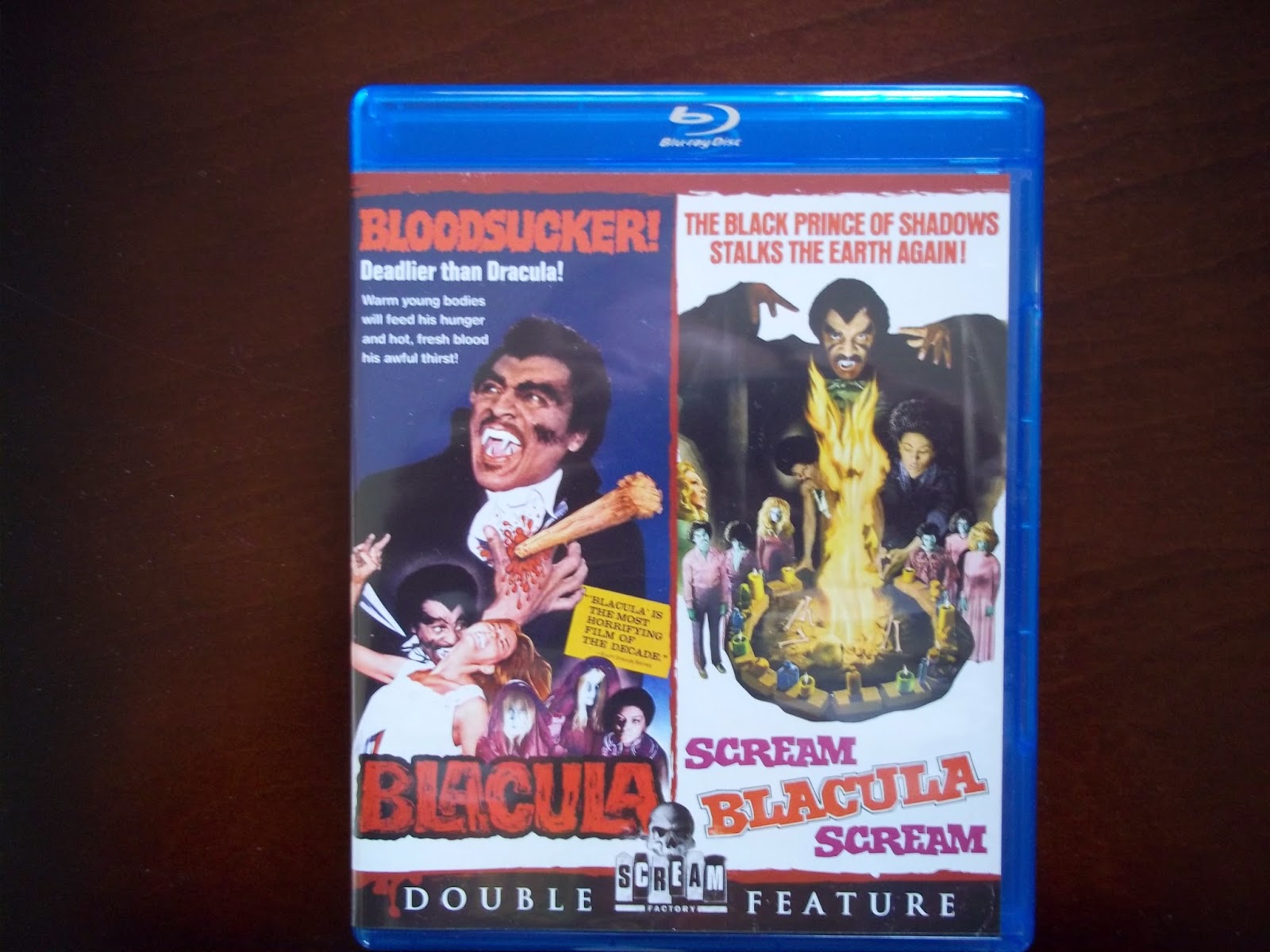 The BLACULA films now have a somewhat notorious reputation, especially among those who have never actually seen them. The very title BLACULA is enough to cause most people to dismiss the films outright. These features were obviously made to cash in on the early 1970s Blaxploitation genre. The company that made the BLACULA films, American-International, was the leading exponent of low-budget drive-in cinema at the time. I'm not trying to say that the BLACULA films are revolutionary in any way, but a re-examination of them shows that they stand up very well to all the other vampire movies of the period....especially the ones from Hammer Films.

The first BLACULA, made in 1972 and directed by William Crain, starts out in the year 1780 with the African Prince Mamuwalde (William Marshall) in Transylvania, trying to convince Count Dracula (Charles Macaulay) to help end the Slave Trade. It isn't long before Dracula shows his true colors, putting the bite on Mamuwalde and sealing the Prince and his wife up in a room at Castle Dracula. Nearly 200 years later, a pair of very gay interior decorators purchase the furnishings in Castle Dracula, including the locked coffin containing Mamuwalde. The pair ship the furnishings back to Los Angeles, where of course they accidentally revive the Prince. Soon victims start popping up all over the city, as Blacula tries to reunite with what he believes is the reincarnation of his wife (Vonetta McGee).

BLACULA is very much a movie of its time. The early Seventies jive dialogue and hair & clothes fashions date it badly. Starting off with the two interior decorators, the movie is very politically incorrect, and most of the attempts at humor will be cringe-inducing to an audience of today. But despite all that....the movie works. Nearly all of this is due to the outstanding performance of William Marshall. His stentorian voice and commanding physical presence make him an outstanding figure of a vampire--it doesn't matter what color he is. Marshall simply elevates this film, and one wishes that the story--and the rest of the cast--where able to be anywhere near on the same level as he is (Vonetta McGee, in particular, just doesn't seem to be passionate enough to arouse Blacula's longings).

In an earlier blog post I included William Marshall among my top ten movie vampires. Most monster-movie buffs agree that Marshall is brilliant as Blacula, but it is forgotten that Marshall--along with Jonathan Frid's Barnabas Collins--was one of the first "romantic vampires". Marshall is the real hero of the story....he even gets to make love to his leading lady, and this was way before TWILIGHT. Marshall also gets a major amount of screen time, and a lot of dialogue.....something Christopher Lee did not get in his Hammer Dracula films of the same period. (By the way, BLACULA makes a great companion piece to Hammer's DRACULA A. D. 1972.)

As for the film itself, BLACULA does have a lot of rough edges, but it also has a few impressive shock scenes, including one featuring the great character actor Elisha Cook Jr.. Seeing Blacula fling around L.A. cops like they were toys is rather ironic in today's times, and the movie's ending is unexpected, and even poignant.

SCREAM BLACULA SCREAM (1973, directed by Bob Kelljan) has long been seen as a dud--I even think it was included in one of those "50 Worst Movies Of All Time" books by the Medved brothers. Seen today, in my opinion, it's not as bad as it's reputation suggests. An elderly voodoo high priestess has died, and the members of her cult choose her foster daughter Lisa (Pam Grier) as her successor instead of her son Willis (Richard Lawson). Willis decides to use a voodoo curse on his sister, but during the ceremony he re-animates Blacula instead. Once again more victims start popping up, as Blacula hopes to use Lisa's voodoo powers to exorcise his vampiric tendencies.

SCREAM BLACULA SCREAM suffers more from the 1970s attitudes than does BLACULA. After Willis performs his voodoo ceremony, the first thing he does is sit down and drink a can of Coors beer.....and after he is vampirized by Blacula, Willis' biggest complaint is that he cannot see himself and his fly threads in a mirror anymore. Blacula's quest to rid himself of his vampire curse is reminiscent of John Carradine's attempt to do the same thing in HOUSE OF DRACULA...and just like those 1940s vampire films, Blacula has the power to turn himself into a animated bat.

The beauteous Pam Grier does a very effective job as Lisa (one wishes that she had been in BLACULA). SCREAM BLACULA SCREAM isn't as good as BLACULA, but it's still better than most horror films made around the same time......and the main reason for that is William Marshall.

The extras on this Blu-ray double feature include an audio commentary on BLACULA by Blaxploitation expert David F. Walker. Walker gives out a lot of information, but the commentary is rather unfocused, and Walker spends a lot of time talking about how bad he thinks the movie is (while at the same time saying he loves it and that he has seen it dozens of times). There is a short interview with actor Richard Lawson about SCREAM BLACULA SCREAM, and there are photo galleries and trailers for both films. The visual and sound quality on both films is excellent...one thing I noticed was how much William Marshall was sweating during both movies (his Blacula costume must have been very hot to wear under the lights).

For those who think that the BLACULA films are jokes, this Blu-ray will show that they come off rather well, all things considering. They are also not nearly as exploitative as most assume (both movies were originally rated PG!). For those monster movie fans who have never seen these features, this Blu-ray is a great opportunity to catch up with them.