DAY OF ANGER On Blu-ray 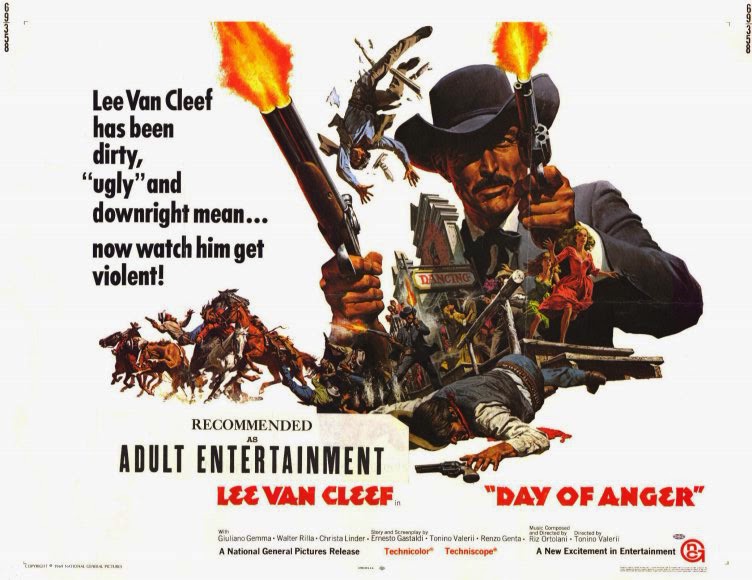 In DAY OF ANGER Van Cleef is once again paired with a younger male co-star. This time it is Giuliano Gemma as Scott, a poor orphan who acts as garbageman for the Western town of Clifton. Scott is reviled by the rest of the citizens of Clifton. A stranger by the name of Frank Talby (Van Cleef) rides into town and treats Scott with respect....Talby even shoots and kills a man who is offended by Scott being present in the local saloon. Scott begs Talby to teach him about gunfighting. The older man does, and soon Talby and Scott are running Clifton....but Talby makes an enemy out of just about everyone he comes into contact with, and eventually Scott must face off against his mentor.

DAY OF ANGER was directed by Tonino Valerii, who had worked with Sergio Leone on A FISTFUL OF DOLLARS and FOR A FEW DOLLARS MORE. The movie was mostly written by Ernesto Gastaldi, whose name will be familiar with any fan of Italian Western and Giallo films. Many of the locations used in DAY OF ANGER were seen in the first two DOLLARS films, and of course Lee Van Cleef became a Spaghetti Western star due to his appearance in FOR A FEW DOLLARS MORE as Colonel Mortimer. A number of supporting actors who had roles in the Leone Westerns pop up in DAY OF ANGER, most notably the grizzled Al Mulock, who was featured in two of the greatest scenes in Italian Western history--the "If you have to shoot, shoot don't talk" segment in THE GOOD, THE BAD, AND THE UGLY and the opening gunfight in ONCE UPON A TIME IN THE WEST.

Despite the various Sergio Leone connections, DAY OF ANGER really isn't a Leone-like film. For one thing Valerii doesn't have the visual flair of a Leone. Another reason is DAY OF ANGER has no obvious humor in it whatsoever. Van Cleef's Frank Talby is more of an Angel Eyes than a Colonel Mortimer, but there is also a lot of ambiguity to him. Talby genuinely seems to like Scott, and goes out of his way help him--but at the same time Van Cleef shows that Talby is not adverse to taking down anyone who is in his way. In the course of the film Talby becomes more of a town kingpin than a mysterious gunslinger. Talby builds his own gambling establishment (complete with giant gold Colt .45s as front entrance supports!) and even gets Clifton's corrupt judge to try and form an alliance with him. It is hinted in the film that an older gunfighter like Talby may be trying to settle down and start a "home" of his own. It's an interesting plot concept for an Italian Western. Frank Talby is one of Lee Van Cleef's best roles, and the actor totally dominates whenever he is on the screen. (And yes, in this movie Van Cleef gets to wear his "Colonel Mortimer" black outfit.)

Giuliano Gemma does very well as Scott, and he even holds his own when he is in the same scene as Van Cleef (not an easy thing for any actor to do). Gemma also had a long career in Italian Westerns (I have to admit this is the first film I have seen the actor in), and in DAY OF ANGER he has a attractive screen presence--so much so that I found the early part of the film where Scott is ostracized by the community a bit hard to believe. (Now, if Tomas Milian had played the role of Scott--yeah, I could believe the townspeople hating on him.)

As for the rest of the cast, Walter Rilla is fine as Scott's "other" mentor Murph, and Christa Linder makes a big impression with the small role of Gwen, a brothel girl who is friendly toward Scott.

Arrow Video has given DAY OF ANGER the Criterion treatment. The Blu-ray contains two cuts of the film--an 104 minute Italian version, which has a English-dubbed soundtrack and a Italian soundtrack with English subtitles, and a 86 minute "international" version, which is dubbed in English. The longer cut is the far better version of the film--it contains far more plot detail. The extras include interviews with director Tonino Valerii, screenwriter Ernesto Gastaldi, and Valerii biographer Roberto Curti. Valerii compares the script of DAY OF ANGER to the story of Oedipus, and Curti talks about the film's portrayal of competitive capitalism, while Gastaldi states that the movie has no political message. There are also trailers, TV spots, a deleted scene, and a 28 page booklet with information about the film and its stars from Italian cinema historian Howard Hughes.

As for how the movie looks on this Blu-ray, it is stupendous--the days of watching crummy pan & scan prints of Spaghetti Westerns on public domain VHS tapes are long gone. The Arrow version of DAY OF ANGER looks much better than most American 1960s Westerns on home video. The sound quality is excellent, and Riz Ortolani's unusual music score gets a nice showcase here. Arrow's package includes two DVDs--each disc contains a different version of the film and the extras.

Some genre enthusiasts rate DAY OF ANGER one of the greatest Spaghetti Westerns of all time. I think the movie's reputation will certainly be enhanced by this Blu-ray. DAY OF ANGER doesn't reach the wild excesses that most Italian Westerns are known for, which might make it attractive to more traditional Western movie fans. While not too overly violent (especially compared to its contemporaries), DAY OF ANGER does have many well-staged shootouts, with the highlight being a duel performed on horseback with front-loading rifles. If you are a fan of Spaghetti Westerns you should check this Blu-ray out, and if you are a major Lee Van Cleef fan you should definitely buy it. This is one of the first Region A releases from Arrow Video, and I highly anticipate seeing what titles the company will put out in the future.