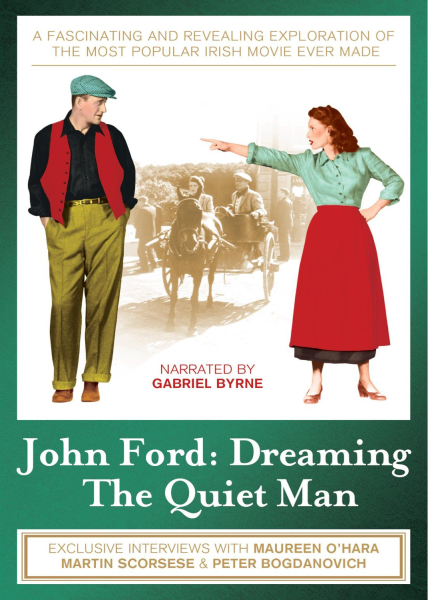 A couple years ago Olive Films released a remastered version of John Ford's THE QUIET MAN on Blu-ray. Now the company has put out on home video a 92-minute documentary about that legendary film called JOHN FORD: DREAMING THE QUIET MAN. Many on the internet have wondered why Olive didn't include this feature on THE QUIET MAN release as an extra. The reason is fairly obvious--Olive wanted to make more money off of fans of THE QUIET MAN by releasing the documentary separately.

What is striking about this documentary is that it was made and produced by the Irish. Writer-Director Se Merry Doyle explores why THE QUIET MAN was so important to John Ford, and how Ford's Irish heritage influenced the movie's making. The viewer is taken to such places as Monument Valley, Portland, Maine (where Ford was born--he was not born in Ireland), and the remains of the actual Irish cottage where John Ford's father grew up.

Many of the Irish locations used for THE QUIET MAN are shown, including the village of Cong, which has now become something of a tourist trap. Local villagers who were around during the making of THE QUIET MAN are interviewed (surprisingly there are still quite a few of them left).

Rare behind-the-scenes footage of THE QUIET MAN is shown, and we get a lot of Maureen O'Hara talking about the movie. She steals the show, of course....but she still won't reveal what she whispered in John Wayne's ear at the end the film.

The documentary also has interviews with directors Martin Scorsese, Peter Bogdanovich, and Jim Sheridan, who discuss the legacy of THE QUIET MAN.

JOHN FORD: DREAMING THE QUIET MAN is a very good piece of work, and old movie buffs will eat it up, especially John Ford/John Wayne/Maureen O'Hara fans. I would not say it is great because the documentary has a tendency to ramble--it starts to make a point about John Ford or the movie, then it goes on to another tack entirely. All the information here is interesting and informative, but it is presented in a leisurely fashion, matched by Gabriel Byrne's equally leisurely narration. One thing I was kind of hoping to see was the opinions of Irish people who are not fans of THE QUIET MAN--I know there are some of Irish descent who feel the movie is a stereotypical view of their country. This feature is something of a celebration of THE QUIET MAN. It works very well when it showcases that classic movie....but it doesn't do as well when it tries to explain John Ford. Then again.....I don't think anybody ever has, or ever will, come close to properly explaining that mercurial cinematic genius.
Posted by Dan Day, Jr. at 12:56 PM