DIE! DIE! MY DARLING! (AKA FANATIC) 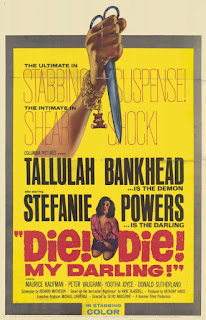 I recently purchased a DVD set of Hammer films released by Mill Creek Entertainment. The two-disc set has six movies total: THE REVENGE OF FRANKENSTEIN, THE SNORKEL, NEVER TAKE CANDY FROM A STRANGER, MANIAC, CREATURES THE WORLD FORGOT, and DIE! DIE! MY DARLING! The last two films I have listed are ones I did not have on home video, so basically I bought this set for them....but since I got the set for only $10, I thought it was a good deal.

For the purposes of this post I'll be reviewing DIE! DIE! MY DARLING! (released in England as FANATIC). This movie was made in 1964, and released the following year. It is considered one of Hammer's psychological thrillers, or as some have called them, "mini Hitchcocks". This production also falls into a mini-genre given the very politically incorrect sobriquet of "old hag thrillers". The "old hag" horror film started with Robert Aldrich's very successful WHATEVER HAPPENED TO BABY JANE?, which starred Bette Davis and Joan Crawford. Both women would go on to star in other similar features to BABY JANE--Davis would go on to work for Hammer twice, and Crawford would spend most of the rest of her movie career working for exploitation masters William Castle and Herman Cohen.

The idea of having once-glamorous female Hollywood stars play dangerous harridans gained a lot of traction in the mid-1960s. Hammer Films joined in by hiring Tallulah Bankhead to play the role of fanatical Mrs. Trefoile in DIE! DIE! MY DARLING! Bankhead was more known as a infamous diva than a popular mainstream actress, but having someone with such a larger-than-life personality in one of their films was a major coup for Hammer. A very young (and very American) Stefanie Powers was picked to play the story's damsel in distress.

The movie begins with the beautiful Pat (Powers) arriving in England with her fiancee, Alan. Pat reveals to Alan that she intends to visit the mother of her late boyfriend, Stephen. Alan tries to dissuade her of the idea, but Pat, like so many other young women in thriller films, refuses to take good advice. Pat takes Alan's car and travels to Stephen's mother's home, a large ramshackle house on the banks of the Thames.

Pat soon learns that Mrs. Trefoile (Bankhead) has a very twisted understanding of the Christian religion. Pat, who feels a bit sorry for the old woman, bears with Mrs. Trefoile's eccentricities the best she can.....but the young woman winds up paying for her good intentions. Even though her son is dead, Mrs. Trefoile is convinced that Pat still "belongs" to him...and she is determined to "cleanse" Pat of her sins. Pat is forced into the old house's attic where she is locked up and held against her will.

The rest of the film details the many travails Pat goes through as she attempts to escape her predicament. She tries to play mind games with Mrs. Trefoile's servants, but they have secrets of their own, which prevent them from helping Pat. The dimwitted groundskeeper (and early and showy role for Donald Sutherland) is no help, and Mrs. Trefoile becomes more and more deranged as the situation goes on. The climax takes place in the cellar, and even uses the "swinging light revealing a corpse" scene from PSYCHO.

DIE! DIE! MY DARLING! is one of the best of Hammer's mini-Hitchcocks, even though at 96 minutes it's somewhat long for such material. The clash between the two female leads is accentuated by the acting style of both ladies--Stephanie Powers is naturalistic and modern, while Tallulah Bankhead is theatrical and over-the-top. Powers goes through the ringer here (though it certainly isn't anywhere near what young actresses have to deal with in the horror films of today). Stefanie's attractive and likable screen presence makes the audience interested and worried about her plight. Tallulah Bankhead plays against her usual image of a jaded socialite and makes Mrs. Trefoile into a very menacing character indeed. Apparently Ms. Bankhead wasn't all that happy with the fact that she was making this film--did that affect her performance? If it did, it was for the movie's benefit. (I also have to wonder if Bankhead might have had some jealousy over having to co-star with Stefanie Powers.)

Even though DIE! DIE! MY DARLING! is a Hammer production, it doesn't really feel like one. The director (Silvio Narizzano) and cinematographer (Arthur Ibbetson) were not Hammer regulars, and the script was written by famed fantastic author Richard Matheson--who was a far more accomplished writer than Hammer's Anthony Hinds and Jimmy Sangster. The interiors were filmed at  Elstree instead of the usual Bray Studios, and the wonderful house used as the residence of Mrs. Trefoile is not Oakley Court. Even the supporting cast is without the typical faces one sees in a Hammer film. Hard core Hammer fans may be disappointed with the absence of so many of the company's expected traits, but I for one think it's kind of refreshing. Most of the Hammer psychological thrillers were directed by Freddie Francis, written by Jimmy Sangster, and filmed in black & white. While these films are all well-done and entertaining, they are all variations on the same theme. DIE! DIE! MY DARLING! is in color, and if you didn't know it came from Hammer, you'd be surprised to find out it did.

Stefanie Powers assuredly deserves to be on the list of famous "Hammer hotties" (she would work for Hammer again about five years later in the movie CRESCENDO). Tallulah Bankhead (who never made another feature film after DIE! DIE! MY DARLING!) also deserves credit as one of Hammer's most memorable monsters. DIE! DIE! MY DARLING! isn't one of Hammer's most famous productions, but it should probably get more attention than some of their more well-remembered titles. It's another example that there was way more to the company than Cushing, Lee, and Terence Fisher. If you haven't seen this movie, and are interested in this type of material, I suggest you check it out. There isn't a whole lot of gore or violence in it, but the suspense is maintained throughout.


As for the Mill Creek set....there are three movies on each disc, and there are no extras. These films have not been remastered in any way, but they are all in anamorphic widescreen, and the picture quality is excellent on all of the features. At around $10, this makes a perfect starter set for anyone beginning to get into Hammer films, or a great pickup for those who are missing certain Hammer titles in their home video collections. 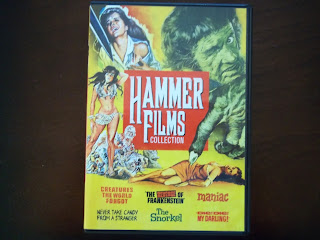