THE HORROR OF IT ALL

I'm on vacation this week, so that gives me time to stay up late and find movies that I haven't seen on YouTube. (Yes, I lead an exciting life.) The other night I watched VOODOO MAN, the infamous Poverty Row "horror" film starring Bela Lugosi, George Zucco, and John Carradine. That movie literally did put me to sleep.

When it comes to horror comedies, very few of them wind up succeeding. The best of this mini-genre by far is Mel Brooks' YOUNG FRANKENSTEIN, because it specifically parodies actual scenes from classic horror cinema. (I would rate ABBOTT & COSTELLO MEET FRANKENSTEIN second-best.) Most horror comedies are set in old houses and deal with underwhelming leading men facing off against phony scare routines. The result usually is a movie that isn't funny or thrilling. Even if a horror comedy does feature actual horror stars, that's no guarantee that the film will turn out well--have you ever tried to sit through the Kay Kyser vehicle YOU'LL FIND OUT, with Karloff, Lugosi, and Peter Lorre?

Unfortunately THE HORROR OF IT ALL falls into the "isn't funny or thrilling" category. Instead of a true established comic, the main lead here is Pat Boone, of all people. When one mentions Pat Boone today, most people will respond with a derisive comment, but here he's really not all that bad. He certainly isn't Bob Hope, but he's a pleasant enough fellow and he does what he can within the limitations of the script. Boone does get to sing one song--the rather obvious-named "The Horror of It All", which has the crooner going on about ghosts and ghoulies. It's the type of song one would expect to hear at a Halloween party for 9-year old kids.

Speaking of 9-year old kids, it seems that most of THE HORROR OF IT ALL is aimed at that particular age group. It would seem that a horror comedy made in the early 1960s would have all sorts of opportunities to make fun of the contemporary Hammer or American-International product--but those opportunities are never taken advantage of. THE HORROR OF IT ALL bears a great resemblance to Hammer's own horror comedy of the early 1960s--their remake of THE OLD DARK HOUSE. Both films were directed by a horror legend (THE OLD DARK HOUSE was directed by William Castle), and both films feature a very lightweight leading man. Both films are set in a remote English mansion, and both films have a cast of eccentric British character actors. Both films also have two young female roles--one is supposedly sweet & innocent, and the other is creepy & aggressive.

There's one other main thing that both THE HORROR OF IT ALL and the Hammer version of THE OLD DARK HOUSE have in common--they're both dopey rather than funny. THE HORROR OF IT ALL starts out with Pat Boone driving down rain-slicked London streets in the middle of the night, backed by composer Douglas Gamley's jazzy main title theme. Watching this gives one the impression the movie appears to be a German krimi thriller--but things literally go downhill soon after, as Boone's character manages to push his car down into a ravine, and he winds up stranded at his fiancee's house, surrounded by her bizarre relatives.

The bizarre relatives are played by such accomplished thespians as Valentine Dyall and Dennis Price, but they are sadly underused. (Price, playing one of his usual caddish roles, is especially wasted.) The performer who really steals the show is Andree Melly, famous among fanboys for her small but memorable role in Hammer's THE BRIDES OF DRACULA, directed of course by Terence Fisher. Melly plays cousin Natalia, a Vampira/Morticia Addams take-off. She's about as close to "Goth" as you can get in 1964, and THE HORROR OF IT ALL would have been a lot better if it had focused more on her instead of Pat Boone and his bland girlfriend (who basically is the "Marilyn Munster" of this strange family). 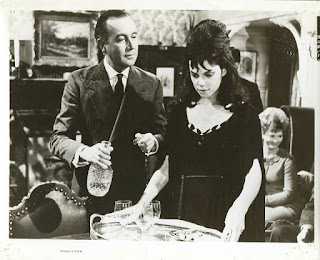 Dennis Price and Andree Melly in THE HORROR OF IT ALL


The plot is the standard horror-comedy tale involving relatives being killed off over a large inheritance. There's a twist ending which doesn't make a lot of sense, but in this movie, what does?

The main reason for anyone to watch THE HORROR OF IT ALL (unless you happen to be obsessed over Pat Boone) is because of the director, Terence Fisher. Fisher has often been rated too highly by his defenders, and too low by those who consider him a "workmanlike" director. My opinion is that Fisher was a very good director, not a great one....but he could raise his game when the circumstances were right. When it comes to THE HORROR OF IT ALL, I have to admit that Fisher's approach here was very...well, workmanlike. The movie is shot and staged competently...and that's about it. There's no inspiration here, no attempt to bring more to the script. It may be that Fisher was uncomfortable with sending up horror, or that light comedy wasn't he style. (Fisher's typical idea of a comic scene in one of his Hammer films was to let Miles Malleson loose for about a couple minutes.) It may also have been that Fisher was discouraged by having to do low-budget work for Robert Lippert during this period (depending on what source you read, Fisher supposedly was "in exile" from Hammer around this time due to the unenthusiastic reception given to his direction of 1962's THE PHANTOM OF THE OPERA). Whatever the reason, if you're looking for Fisher's well-known tightly edited scenes of shock and surprise, or his underlining mood reflecting "the charm of evil", you're not going to find them here--not that they would belong in a lighthearted horror spoof in the first place.

THE HORROR OF IT ALL will be mainly of interest to Hammer fanatics. It's a movie that looks old-fashioned for the time it was made--and considering that it starred Pat Boone, and came out during the height of Beatlemania, I'm sure those who saw the movie on its original release probably felt the same way.