NEVER TAKE CANDY FROM A STRANGER 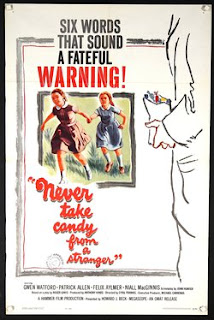 After I shared my post on DIE! DIE! MY DARLING! with the "Hammer Films NOT Horror" Facebook group, the administrator, Paul Meadez, asked if I would be interested in writing about another film on the Mill Creek Hammer DVD set--NEVER TAKE CANDY FROM A STRANGER, also known as NEVER TAKE SWEETS FROM A STRANGER in England. This is a movie that's about as far away from the expected Hammer product as you can get--but it is also a well-made, sincere, yet suspenseful look at the delicate subject of child molestation, impressively directed by Cyril Frankel.

Despite the fact that NEVER TAKE CANDY FROM A STRANGER was made in 1960, it remains one of the most adult and serious looks at what many consider to be a 21st Century problem. This film could easily be remade with just a little bit of updating, and it still would not lose its power. The story revolves around Peter and Sally Carter, and their 9-year old daughter Jean. Peter has just moved his family to a small Canadian town from England in order to take up the position of Principal of the local high school. Peter and his wife are shocked to find out from Jean that she and her friend Lucille took their clothes off after being asked to by the elderly Mr. Olderberry in exchange for candy. Mr. Olderberry also happens to be the head of the town's most prominent family. Peter is met with derision and doubt by the rest of the community, but he decides to press charges and take the case to court, especially after he and his wife find out that Mr. Olderberry's "eccentricities" are well known among the townspeople.

The trial goes badly--Jean is intimidated by the defense attorney, and Peter decides to drop the case in order to prevent his daughter from going through the entire ordeal. Peter, disgusted at the town's attitude about the affair, turns in his resignation from the school and prepares to move his family away. Before he can, however, Jean and Lucille wind up encountering Mr. Olderberry in the large forest outside of town--and the tale comes to a shattering conclusion.

NEVER TAKE CANDY FROM A STRANGER is definitely worth seeing, but it is not an easy film to watch, especially if the viewer has young children. There's nothing explicit or gruesome about it--the movie is tastefully filmed in ultra-sharp black & white widescreen by cinematographer (and future Hammer director) Freddie Francis--but the gravity of the situation facing the main characters lasts longer in the memory than any gory details would. You can't help but feel for the plight of the Carter family--they've done nothing wrong, and they've tried to go about things the right and proper way--but they are the ones who are ostracized and accused (a result that still happens to victims of abuse all too often today). Patrick Allen plays Peter Carter. Allen was an actor who had a strong masculine presence, and that makes his problem all the more frustrating--he wants to lash out and protect his daughter, but he also doesn't want to break the law himself (and, as an educator, he has a certain reputation to uphold). Gwen Watford plays Mrs. Carter, who goes through her own mental agony, and Janine Faye, best known to Hammer fans for her role in HORROR OF DRACULA, is excellent as Jean. Most child actors are either too cute or act too adult--Faye comes off as a very realistic 9 year old girl who is obviously confused and upset with all that is happening around her.

The role of Mr. Olderberry, a character who is more of a monster than anything one finds in a Hammer chiller, is played by British character actor Felix Aylmer (Hammer lovers will know him from his performance as Peter Cushing's father in THE MUMMY). Aylmer is amazingly effective, considering he doesn't even say one line of dialogue. Aylmer manages to be creepily sinister, yet still frail and elderly, all at the same time. The sequence in which Olderberry chases the young girls through the forest (actually Black Park) is one of the most gripping ever filmed in the entire Hammer canon.

If you've never heard of, or have never seen NEVER TAKE CANDY FROM A STRANGER, don't feel too bad. It's a movie that I can't remember ever being shown on television, and I didn't see it until it came out on DVD in America for the first time a few years ago. It's not surprising that this film isn't very well-known--how many people would choose to watch a drama about child molestation as a way to pass the time? The fact that it was produced by Hammer probably hurt the movie's reputation--most folks would have assumed that the company was using a serious social problem as a easy way to sensationalize and shock. NEVER TAKE CANDY FROM A STRANGER is not sensational or cheap. It works as both a straight drama and a suspenseful tale, and even though the subject matter may make most viewers uneasy, it deserves to be seen at least once. The film's story has more truth to it than fiction--what the Carters go through is something that unfortunately many people go through all over the world, every single day.

Many consider the "glory days" of Hammer Films to be between the years of 1958 and 1962--and usually the "glory days" are referring to the company's best horror films made during that period. But let's not forget that three of the best non-horror Hammers were made at that time--HELL IS A CITY, YESTERDAY'S ENEMY, and NEVER TAKE CANDY FROM A STRANGER. These are three very different films--crime drama, war drama, social drama--yet they stand up to any similar product made by more "important" studios. Hammer wasn't just a great horror company....they were a great film company, period, and NEVER TAKE CANDY FROM STRANGER shows how diverse they actually were.