CARNIVAL OF SOULS On Criterion Blu-ray 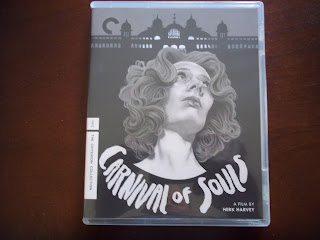 CARNIVAL OF SOULS (1962) is one of the great cult movies of all time, and now it's getting the super-deluxe treatment with a new Criterion Blu-ray.

Criterion released CARNIVAL OF SOULS on DVD several years ago, but this upgraded version is a worthy purchase. When I started collecting movies during the VHS boom in the late 1980s, public domain copies of this title could be found all over the place. I'm sure most classic horror film buffs have CARNIVAL OF SOULS represented somehow in their home video libraries. The video quality of this Criterion Blu-ray simply blows away any other version of the movie that I've seen--and it makes you appreciate even more the direction of Herk Harvey and the cinematography of Maurice Prather.

Saying that CARNIVAL OF SOULS was Herk Harvey's "only" feature film is something of a misnomer--Harvey had worked for years at a company called Centron, making industrial and educational films. While driving through Utah on his way home to Kansas, Harvey happened to see the deserted Saltair amusement resort. The sight of the desolate and dilapidated park inspired Harvey to ask his Centron co-worker, John Clifford, to write a horror tale around it. The result was one of the eeriest and creepiest movies ever made--an atmospheric combination of low-budget indie docudrama, silent film black & white expressionism, and mid-20th Century American Gothic.

CARNIVAL OF SOULS revolves around the fate of Mary Henry, an unusual young woman who is the sole survivor of an accident involving a car going off a bridge into a river. Mary leaves her hometown soon after the accident and travels to Utah, where she will start her new job as a church organist. Once Mary gets to Utah, she starts having visions of a pasty-faced ghostly figure (played by director Harvey). She's also strangely drawn to the deserted amusement park outside of town, while trying to fend off the lecherous interests of her neighbor across the hall.

Candace Hilligoss is perfect as the distant Mary. Hilligoss was the only professional actor used in CARNIVAL OF SOULS, and while she's pretty, she also has an off-kilter quality about her that makes her a mystery to the audience. A more obvious, more glamorous "scream queen" type would have hurt the tone of the film. Mary doesn't seem to be part of the world going on around her (it's fairly obvious why), and Hilligoss portrays this very convincingly--even though she has the lead role, the viewer never gets a chance to warm up to her.

Some of the best scenes in CARNIVAL OF SOULS have Mary vacantly walking around the Saltair resort. This may be boring to some, but the past-its-prime amusement park is one of the best real-life movie locations ever, and proof that ingenuity and creativity are more important to a fantastic film than big-budgeted special effects. Director Harvey also filmed several scenes in the town of Lawrence, Kansas, and the plain, ordinary look of the town and its citizens gives the movie a sense of "unreal realism".

There's plenty of extras on this Criterion Blu-ray--most of them were featured on the Criterion CARNIVAL OF SOULS DVD. There is some new material, including appreciations of the film from Dana Gould and David Cairns. There's a documentary on the 1989 reunion of the cast and crew, a commentary with Herk Harvey and John Clifford, excerpts from movies made by Centron, and a lengthy selection of outtakes backed by the film's effectively spooky organ music score by Gene Moore.

The cut of CARNIVAL OF SOULS on this Blu-ray runs 78 minutes. Some on the internet are complaining that it is not the "uncut" version of the film that runs 82 minutes. The scenes not included in the Blu-ray cut are featured in a deleted scenes section and I really don't think having the 78 minute cut instead of the 82 minute cut is that big of a deal. 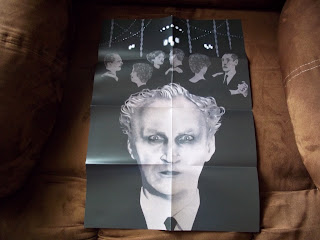 As usual with a Criterion release there is a booklet included, and this one has a fine essay on CARNIVAL OF SOULS by Kier-La Janisse....and it folds out to make a nice poster of the ghoul character that menaces Mary Henry.

I've always been a big fan of CARNIVAL OF SOULS ever since a first saw it years ago. It has no overt violence or gore, yet it remains far more memorable than the many "important" monster movies made at the same time. It's a tribute to low-budget creative film making, and it's the type of movie that should be watched when you are all alone late at night.
Posted by Dan Day, Jr. at 2:48 PM