Yesterday I attended G Fest XXIII, held at the Crowne Plaza Chicago O'Hare hotel. G Fest is a celebration of Godzilla and all things kaiju (that translates to "giant monster", in case you don't know). The last time I went to G Fest was 2012--that was where I met the legendary Svengoolie for the first time--and this year the attendance was far larger...so large that I was told that it was a G Fest record.


The main reason I went to G Fest was to meet Linda Miller, who played the female lead in the 1967 Toho film KING KONG ESCAPES. That movie has become more and more popular over the years--I have to think that the fact Svengoolie has shown it on his weekly MeTV program a few times in recent years has something to do with it. For a long time KING KONG ESCAPES was compared unfairly to the seminal 1933 KING KONG, but I believe that now many see the Toho film as enjoyable imaginative fun. Even though her voice was dubbed for the role, Linda still made an impression as the cute and spunky Lt. Susan Watson. Linda had a very brief acting career, and many kaiju fans wondered what had happened to her. After agreeing to a recent interview for G-FAN magazine, Linda has started to appear at movie conventions (this was her first time at a G Fest). At her G Fest Q & A session, Linda was so overcome by the welcoming attitude of the fans that she started to cry. I was particularly touched by this, since it reinforced the fact that those folks we see in the movies with love are human beings. That should be obvious, but when we see certain films over and over again we kind of take for granted the performers that are involved in them--they have feelings and emotions just like us. 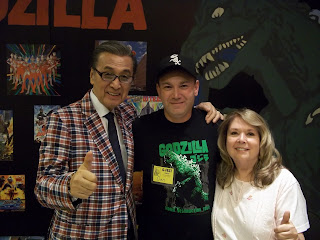 I also got to met the legendary Akira Takarada again (I first met him at the earlier G Fest I attended). Mr. Takarada played the young male lead in the very first GODZILLA, and he went on to appear in several more kaiju films for Toho. He's to the giant monster genre as, say, Clint Eastwood is to Westerns. As the first time I met him, he was charming and friendly to everyone--and what's even more amazing is that he seems not to age at all! 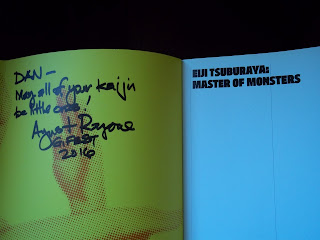 I also got to meet author and ultimate kaiju expert August Ragone, who inscribed my copy of his fantastic book on Japanese FX master Eiji Tsuburaya. I reviewed the book on this blog in 2014, and I mentioned that to him, and he remembered it!

One thing I didn't do was buy any memorabilia--I have to say I was proud of my self-control. There were plenty of things I wanted to buy, but when you are a working-class fellow like myself, you have to have some priorities--besides, there's a couple other movie conventions I plan on going to next month.

G Fest is very reminiscent of the Monster Bash conventions I usually attend. It has a very low-key and fan friendly feel (since it is not officially affiliated with Toho in any way, it can't be called the "Godzilla convention"). There's definitely more of a sense of community here that the typical big-time big-city movie geek conventions going on today. J. D Lees and everyone who helps make G Fest happen do an excellent job, and I recommend going to it if you have a chance.
Posted by Dan Day, Jr. at 10:18 AM