The Ray Harryhausen Blogathon: EARTH VS. THE FLYING SAUCERS 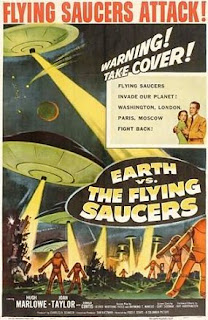 In the mid-1950s, master special-effects animator Ray Harryhausen was involved in a number of low-budget black & white movies which featured a particular creature--THE BEAST FROM 20,000 FATHOMS, IT CAME FROM BENEATH THE SEA, and 20 MILLION MILES TO EARTH. 1956's EARTH VS. THE FLYING SAUCERS does not fit this pattern--instead of an individual monster such as a dinosaur, giant octopus, or space being, the movie has an entire alien race as the enemy. Ray Harryhausen was interested in the challenge of making generic flying saucers into a noteworthy menace, and he succeeded.

EARTH VS. THE FLYING SAUCERS is not as beloved by Harryhausen fans as the later mythological fantasies the animator would work on. Produced by Harryhausen's usual partner Charles Schneer, and with a story by Curt Siodmak, the movie has all the hallmarks of a typical fifties sci-fi flick--an opening prologue with stern narration, a scientist (played by an actor in his forties) who almost always wears a collared shirt and who smokes a pipe, many characters who are military men, and large sections of stock footage. The movie is a "B" picture, nothing more, nothing less. It's the "Harryhausen touch" that makes EARTH VS. THE FLYING SAUCERS different.

The actual flying saucers presented here almost have attitudes of their own, due to the genius of Harryhausen. The way they fly, scoot about, even the way they fall out of the sky when attacked--it's as if the saucers are alive, instead of something alive inside of them. The alien race which is attacking the Earth is never named, and we don't even know what planet they are from--in fact we only see one of the actual aliens very briefly--so the saucers are the true representation of the threat against humanity in this film.

The ultimate highlight of EARTH VS. THE FLYING SAUCERS is the final battle, which takes place in Washington, D.C.. Scientist Dr. Russell Marvin (Hugh Marlowe) has developed a sonic ray which can bring down the saucers from the sky. The falling space vehicles wind up taking out the Washington Monument and the Capital Dome (the White House is spared--maybe the filmmakers thought that might have been a bit too much). Such destruction of national monuments is a given in today's big-budget spectaculars, but in 1956 it was something of a novelty, and it made a huge impression on baby-boomer audiences of the day. All the destruction was animated by Harryhausen--frame-by-frame, brick-by-falling brick--and it has a sense and texture to it that CGI just can't match.

Harryhausen also designed the spacesuits the aliens wear, and several other details in the film. The man wasn't a director or writer, but the films on which he worked on bear his stamp as much as any other credited technician (the actual director of EARTH VS. THE FLYING SAUCERS was Fred Sears, who does an okay if competent job). 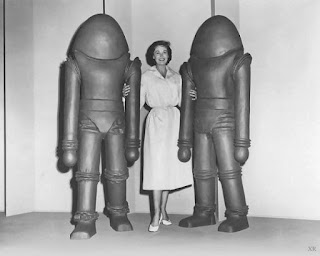 Unlike the amazing flights of fantasy seen in Harryhausen's later work, EARTH VS. THE FLYING SAUCERS has a Cold War, militaristic tone. In the beginning of the film the aliens try to contact Dr. Marvin and his wife Carol (Joan Taylor), but the message is misunderstood. The result is that when the aliens, in their saucers, arrive at the rocket base Dr. Marvin works at, they are attacked--and they destroy the base in return. The rest of the story takes for granted that the aliens are the "bad guys", and it's pretty well cut and dried that Earth has to fight back no matter what. There's no attempt to understand the aliens, or try to make amends with them. The movie has a "us vs. them" mentality, which may be politically incorrect now, but served the purpose of the times in which it was made.

The flying saucers may be the big stars here, but the human performers deserve some credit as well. Hugh Marlowe may come off as too much of a generic white guy for some viewers now, but he makes Dr. Marlowe into a sincere, believable character. Joan Taylor as Mrs. Marlowe doesn't get much to do, but she's charismatic and attractive (and she also spends a lot of time running around Washington D.C. in high heels). Morris Ankrum plays Mrs. Marlowe's father, General Hanley. Any true film buff knows Ankrum appeared as a military man in numerous sci-fi flicks--so many that I'm surprised that a real U.S. Army base hasn't been named after him yet.

EARTH VS. THE FLYING SAUCERS isn't on the same level as JASON AND THE ARGONAUTS, but it is a fast-paced, entertaining science-fiction tale--and it has the creative genius of Ray Harryhausen as a bonus. During his working life Harryhausen attempted to do a number of science-fiction projects--such as a version of THE WAR OF THE WORLDS and a intriguing project named SINBAD GOES TO MARS. One can only wonder what Harryhausen would have done with a big-budgeted, full-out science-fiction epic. Perhaps we should just be thankful for all the brilliant stories Ray Harryhausen did provide us with. I've loved all of his movies for almost my entire life, and I've always considered him a creative icon. The world is a better place because of what he brought to it.


This is my contribution to the Ray Harryhausen Blogathon, hosted by Wolffian Classics Movies Digest. 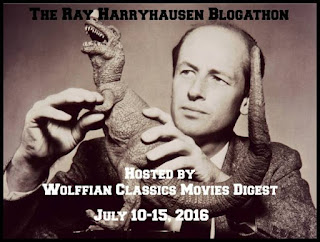