DESTINY On Blu-ray From Kino 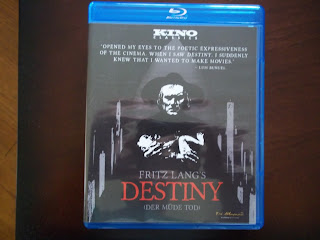 In 1921, director Fritz Lang, based in Germany, started on a run of films for the rest of the decade that would be hard to match. They are among the most renowned and influential movies made during that period. Here's the list:

The list is even more impressive if one continues it with Lang's first two films of the sound era: M and THE TESTAMENT OF DR. MABUSE. The only title I have mentioned which I did not own on home video was DESTINY. Now Kino Lorber has released a superb Blu-ray edition of that film, which is also known as DER MUDE TOD (meaning "The Weary Death").

DESTINY concerns the attempts of a young woman (Lil Dagover) to save her young fiancee (Walter Janssen) from the clutches of Death himself (Bernard Goetzke). The literally weary Death, who is tired of his job of ending people's lives, gives the woman three chances to save a life in three different time periods and locations, and if she does, her lover will be brought back to her.

A simple description of the plot is not sufficient enough to put across to the reader the artistry of this film. DESTINY is an exquisite visual feast, with the young woman's three challenges set in an Arab city, Venice in the 14th Century, and ancient China. The three stories give Lang and his art directors (Robert Herlth, Walter Rohrig, and Hermann Warm) several opportunities for some inventive shot selections. DESTINY is a movie that needs to be watched--in other words, the viewer should pay attention to the composition and the background of each scene as well as the characters in it.

Among the many visual highlights is Death's "Hall of Candles", in which human lives are represented by a burning candle, and the appearance of Death, who wears a black cloak and a wide-brimmed black hat. When Death stops a carriage transporting the young lovers, I couldn't help but be reminded of a scene in WHITE ZOMBIE where a similarly-garbed Bela Lugosi also halts a carriage containing a young couple. Despite its subject matter, DESTINY is not a horror film, but more of a dark fable which winds up having an ultimately moving ending.

Many of the talent involved in the making of DESTINY would go on to be major figures in the genre of German Expressionist Cinema. Lil Dagover had already starred in THE CABINET OF DR. CALIGARI, and Rudolf Klein-Rogge, who plays two roles here, would soon play Dr. Mabuse for Fritz Lang, as well as the mad scientist Rotwang in METROPOLIS. Lang co-wrote the film with Thea von Harbou, and the two would marry and work together until Lang left Germany in the early 1930s.

When it comes to releasing silent classics for home video, nobody matches Kino. This Blu-ray features a 2K digital restoration of the film, including restored intertitles, tinting, and toning. A 15 minute featurette visually explains the choices made for the tinting and toning of the movie. The music score was newly composed by Cornelius Schwehr and performed by the Berlin Rundfunk Symphony Orchestra, and I have to say it fits the film rather well. An audio commentary is included featuring VIDEO WATCHDOG editor Tim Lucas. As usual, Lucas' talk is insightful, focused, and informative, and it increases the viewer's knowledge and appreciation of the film. Lucas manages to connect DESTINY to such diverse subjects as Amicus horror anthologies, spaghetti westerns, and even CAPTAIN AMERICA: CIVIL WAR.

I was highly anticipating this Blu-ray release...and I certainly wasn't disappointed. The more I am exposed to silent cinema, the more I am reminded of how beautiful it can be. I feel sorry for those who feel that watching a silent film is "uncool" or embarrassing. DESTINY is definitely going to wind up on my list of best Blu-rays of 2016.
Posted by Dan Day, Jr. at 3:00 PM