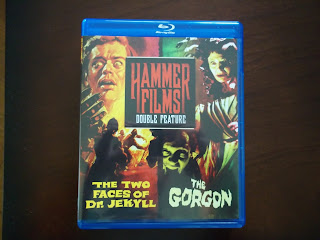 The Mill Creek Hammer Blu-rays are here--and film geeks all over the internet have been commenting on them. Having finally seen all four features on the two discs, it's time for me to throw my two cents in.

THE REVENGE OF FRANKENSTEIN is presented in 1.66:1 anamorphic widescreen...and from my point of view doesn't look all that great. As a matter of fact, I think the old DVD of ROF looks as good, or maybe even better. I was really hoping that ROF would be a major upgrade, since it is one of Hammer's best films (even though a lot of Hammer fans feel rather lukewarm toward it). THE CURSE OF THE MUMMY'S TOMB looks a bit better than the DVD version, but not enough for me to say that it is a major improvement. CURSE is one of Hammer's more mediocre outings.

As for the other disc, both THE TWO FACES OF DR. JEKYLL and THE GORGON look superior to their DVD counterparts--THE GORGON especially so. Watching TWO FACES on Blu-ray reinforces the artistry of cinematographer Jack Asher and production designer Bernard Robinson--unfortunately the movie itself is something of a misfire. (I'd have to write an individual post on it to explain my feelings, if anyone would be interested.) THE GORGON on Blu-ray showcases the work of cinematographer Michael Reed.

Mill Creek Entertainment is known for their budget home video releases, and I got these for $9 each from Amazon. But you get what you pay for--there are no extras on these discs, not even any trailers. And apparently the low price means you're not going to get proper spelling either: 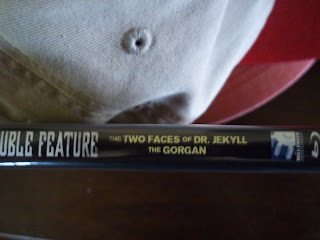 If you think that's bad, consider what it says on the spine of the REVENGE OF FRANKENSTEIN/CURSE OF THE MUMMY'S TOMB blu-ray--instead of "CURSE" it says "CURESE". Is this nit-picking? Well...if you can't even spell the name of the film's title on your packaging correctly, what does that say about your company?

Hard-core Hammer fans like me are going to buy these no matter what--but these are no "must have" discs. If you have the ICONS OF HORROR DVD set, I don't think you really have to get these discs, unless you just want to take the opportunity of a cheap upgrade. The thing is, the REVENGE OF FRANKENSTEIN/CURSE OF THE MUMMY'S TOMB disc isn't all that much of an upgrade. If you had to buy just one of these I would definitely pick the TWO FACES OF DR. JEKYLL/THE GORGON disc. If any of you would appreciate my expanded feelings on any of the films contained on these discs, please let me know by making a comment below.
Posted by Dan Day, Jr. at 10:34 AM