GODZILLA 1984/THE RETURN OF GODZILLA On Blu-ray 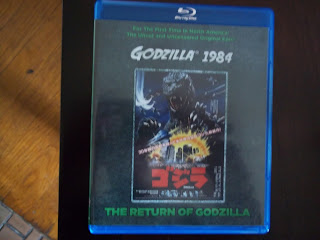 Kraken releasing has come out with one of the very few Godzilla movies not officially available in North America on either DVD or Blu-ray--the original Japanese cut of GODZILLA 1984, also known as THE RETURN OF GODZILLA.

GODZILLA 1984 was basically a "reboot". It was the first Godzilla film made by Toho Studios in nearly a decade, and it launched what is now referred to as the "Heisei" series of movies featuring the King of the Monsters. Producer Tomoyuki Tanaka decided to ignore all the Godzilla entries of the 1960s and 70s, and mount GODZILLA 1984 as a direct sequel to the very first Godzilla film made in 1954. (GODZILLA 1984 does not explain how the Big G was able to survive the effects of the Oxygen Destroyer that killed him at the end of the '54 movie.)

Not only does GODZILLA 1984 ignore the various Godzilla sequels, it also ignores those movies' goofy, kid-friendly tone. GODZILLA 1984 tries to be more serious, with a major Cold War subplot involving the nuclear weapons of both the United States and the Soviet Union. Godzilla is the only giant monster around this time, so there's no wild kaiju fighting action. There's almost no intentional humor in the story, except for the character of a looter who has very little screen time. There isn't even an annoying baseball cap-wearing little kid tagging along and commenting on the action.

The lack of typical kaiju movie weirdness may sound welcome to some, but it also cuts down on the entertainment aspect of the picture. The Japanese cut of GODZILLA 1984 is 103 minutes long, and it is a very slow-moving film. Godzilla only shows up twice during the first hour, while most of the scenes center on groups of politicians and high-ranking military officials talking about how to handle the beast. (The action does get ramped up a bit during the climax.) Like many of the classic Godzilla films, this one has two young leading men--one is a journalist, and the other is a college research student, who just so happens to have a cute sister that attracts the attention of the journalist. Usually in the classic Godzilla movies one of the leading men would contribute some comedy relief--but there's none to be found here, and while the performers who play the trio are adequate, there's nothing about them that makes the audience all that interested in their fate. In another nod to the older Godzilla outings, the young leads are teamed up with a middle-aged scientist, who comes up with the idea of a homing device to lure Godzilla into a volcano.

As for Godzilla himself, he's way bigger than he was in the classic series, and he's a lot more fearsome looking. (Godzilla's look would for the most part stay the same throughout the "Heisei" series.) The thing is, he really doesn't get much to do here--it's as if Toho wanted a "badder" Godzilla, but at the same time made sure he wasn't too destructive.

GODZILLA 1984 was released in the U.S. the very next year and called--you guessed it--GODZILLA 1985. That version was handled by Roger Corman's New World Pictures, and the biggest change was added scenes with Raymond Burr reprising his role from the U.S. version of the original GODZILLA. The U.S. version of GODZILLA 1984 is not on this Blu-ray, due to rights issues. Many of the internet have complained about this--I find that ironic, because it used to be that film geeks whined about the U.S. versions of Toho kaiju movies popping up on home video. It's been a very long time since I saw GODZILLA 1985 (I believe I had it on VHS), and I honestly can't remember if it is a better version than GODZILLA 1984. (I have a feeling that the American version moved a lot quicker--it was a shorter cut.)

Kraken's Blu-ray of GODZILLA 1984 is not exemplary from a visual standpoint. The picture is not very sharp, and the colors are not very bold. The entire film has a murky look to it (in all fairness, that may be because the movie had a darker tone than the classic Godzillas), and the many matte shots in particular appear shaky. (The FX would improve greatly in the next film in the series, GODZILLA VS. BIOLLANTE.) The 5.1 DTS sound is very good. There is a Japanese language track with English subtitles, and a English-dubbed dialogue track, in which the voice artists sound Australian! The only extras are trailers for GODZILLA 1984 and older Godzilla movies that Kraken has released on home video. Considering the importance of this film in the history of Godzilla, an audio commentary from someone like August Ragone is sorely missed.

GODZILLA 1984 is more significant from a historical perspective than an entertainment one. I would rate it as a "fair" Godzilla movie--in my opinion, most of the later entries in the "Heisei" series are better. GODZILLA 1984 was rather successful when originally released in Japan, and if it had not, there might not have been more Godzilla movies made at all. I got this Blu-ray from Amazon for $10, and I assume that anyone interested in this will want it to add to their kaiju movie collections. Unfortunately, I get the feeling that one day very soon somebody will finally release the American GODZILLA 1985 on Blu-ray--which means that monster movie fans will essentially be buying the same movie again.
Posted by Dan Day, Jr. at 2:50 PM