An Ode To VIDEO WATCHDOG


There was some sad news yesterday in the film geek world with the announcement that Tim Lucas' VIDEO WATCHDOG magazine is coming to an end (in print form, at least).

Many of the horror/science fiction movie magazines I have read since my younger years--titles such as STARLOG, FANGORIA, CINEFANTASTIQUE, SCARLET STREET, and many others, have already bit the dust. I believe FILMFAX is still around, but I haven't read an issue of that in years. It seems the only major ones left are CINEMA RETRO and Richard Klemensen's wonderful LITTLE SHOPPE OF HORRORS. I know it seems ironic for a guy writing a movie blog to be lamenting about the demise of a print magazine, but there's a special satisfaction in getting off the internet and reading a great book or a periodical. Each new issue of VIDEO WATCHDOG was a special treat.

VIDEO WATCHDOG was known as "The Perfectionist's Guide to Fantastic Video", but to me personally it was more than that. The magazine exposed me to tons of films and television shows that I would have never bothered to seek out on my own. Obscure Spaghetti Westerns, German krimis, Italian giallos, no-budget 1970s American grindhouse features, British TV serials--VW covered them all. You couldn't really pin VW down, and you never really knew what you were going to see inside its pages. VW was scholarly and insightful, but at the same time the magazine never took itself--or the movies it commented on--too seriously.

I started buying VIDEO WATCHDOG regularly in 2000/2001. It was about that time that the DVD boom started to really kick in, and the magazine's home video reviews were essential reading. Those reviews, even the ones years old, still hold up today--I can't tell you how many times I have watched a film, and then scoured through all my many VW back issues to find the appropriate review of it. Most of the films covered in VW have never been properly analyzed in print anywhere else. I always learned something new in every issue of VW--or at least looked at a supposedly familiar title in a different light.

I know that Tim Lucas and his wife Donna worked incredibly hard to put out each issue, and that commitment was obvious on every page. VW, unlike a lot of short-lived "monster movie" mags, never appeared cheap, and it never talked down to its audience. A number of fantastic genre scholars made their mark on its pages, including the likes of Tom Weaver, Kim Newman, and Eric Somer. Many of the covers featured incredible work from artists such as Mark Maddox and Charlie Largent. VW may have been an independent publication, but there was nothing small-time about it. There's no doubt that many home video companies such as Kino, Arrow, and Blue Underground were influenced by VW--especially when one considers how many of VW's writers (including Tim Lucas) have contributed many excellent audio commentaries on numerous DVDs and Blu-rays. 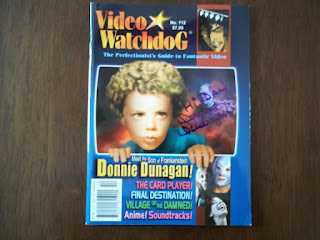 I'd be remiss if I didn't mention the regular columns featured in most issues of VW, such as the one by Ramsey Campbell and the "Audio Watchdog" column by Douglas E. Winter. In recent years filmmaker Larry Blamire's "Star Turn" column, in which he examined guest star performances on episodes of classic American TV shows, was particularly noteworthy. With the proliferation and popularity of such "retro" TV networks as MeTV, these performances are finding a whole new audience, and I'd love to see Mr. Blamire turn the column into a full-length book project.

The world of cinema is going to lose something without any more print issues of VIDEO WATCHDOG. I for one was really hoping that my good friend Joshua Kennedy might get one of his pictures reviewed in VW some day. I don't know what the future for the VW brand might be (an annual special issue--or a career retrospective?), but I hope it continues on in some form.

I have to admit that many of the films I've read about in VIDEO WATCHDOG I have not seen--and many of them I probably will never see. But the magazine has inspired me to seek out and view titles I never thought I would be interested in, and, yes, it has caused me to buy some of those titles. VIDEO WATCHDOG made me a better film geek, and I will miss it.
Posted by Dan Day, Jr. at 1:22 PM