THE MONSTER OF PIEDRAS BLANCAS 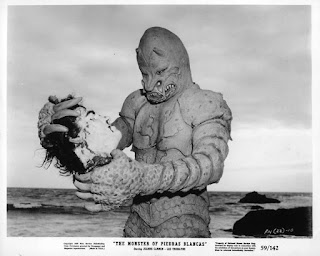 THE MONSTER OF PIEDRAS BLANCAS (1958) is more famous for its publicity photos (such as the one above) than anything that happens in the film. The stills, which show the Monster in various poses with a human head, have appeared in dozens of horror film books & magazines. These images prove that the movie has a bit more gruesomeness than the typical 1950s sci-fi/horror flick--but in the end it still remains nothing more than a okay little low-budget monster tale.

THE MONSTER OF PIEDRAS BLANCAS has just been released on Blu-ray and DVD by Olive Films (I purchased the DVD version). A small sleepy village on the coast of California is being beset by horrific murders which involve the victims having their heads severed. The excitable local grocer seems to think that it is the work of the legendary "Monster of Piedras Blancas", while the grouchy lighthouse keeper seems to know more about what's really going on than he's willing to tell. The local doctor and constable team up to try and solve the mystery, with help from the lighthouse keeper's voluptuous daughter and her biologist boyfriend.

This movie is 71 minutes long, but even at that length tends to drag at times. The Monster, which looks like a cousin of the Creature of the Black Lagoon, is barely seen until the climax. Director Irvin Berwick manages things in an efficient if workmanlike manner. The film was produced by Jack Kevan, who had worked as a make-up technician in Hollywood on such films as, you guessed it, THE CREATURE FROM THE BLACK LAGOON.

The best thing about THE MONSTER OF PIEDRAS BLANCAS is its small-town atmosphere, due to the real-life California locations. The movie doesn't have a "Hollywood" feel to it, and neither do the lead actors and extras. except for familiar character player Les Tremayne as the doctor. In the story the local grocery also has to serve as a temporary mortuary (I bet this made the townsfolk think twice about buying ice cream). Considering that this town is so small, and the only authorities are a middle-aged doctor and a even-older "constable", I had to wonder why no one thought to call in some help from the county or the state. (Of course, if they did, the movie would have lasted about 15 minutes.)

Jeanne Carmen plays the lighthouse keeper's daughter, and she makes a very attractive Scream Queen. She also gives the girl a independent mindset, but she still winds up wearing a nightgown and being carried off by the Monster (not that there's anything wrong with that). The climax involves the lead characters, the Monster, and the lighthouse, which is another actual location. I couldn't help but feel that the lighthouse ending was reminiscent of the windmill ending featured in James Whale's 1931 FRANKENSTEIN. (An earlier scene in the film, where a distraught father silently carries the body of his little girl though the town, also brought to my mind the Whale classic.)

Olive Films has released THE MONSTER OF PIEDRAS BLANCAS in black & white 1.78:1 anamorphic widescreen. The picture and sound quality are fine--I doubt a low budget almost-60 year old film is going to look any better. As usual with Olive, there are no extras.

I wouldn't call THE MONSTER OF PIEDRAS BLANCAS a great film, or even a great 50s monster picture, but it does have some unusual elements. The most unusual is the gruesome tone--and that's not just referring to the decapitations (in the actual film we only see a couple quick shot cuts to a human head). Among the victims are two young brothers and a little girl--it's very rare to have victims that age in a movie like this. You can call this a poor man's CREATURE FROM THE BLACK LAGOON--but unlike the creature, the Piedras Blancas Monster doesn't engender much sympathy from the audience.