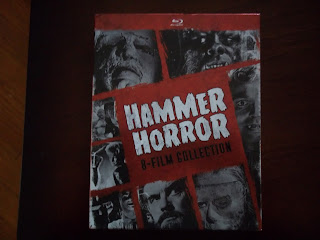 Over a decade ago, Universal released a Region One DVD set of eight Hammer horror films. The set was one of the best Hammer home video releases for the North American market at the time, despite some sniping about it on the internet. I (and many others) have been calling on Universal to upgrade this set to Blu-ray, and the company has finally done it--to even more controversy than the original DVD set faced.

I try not to get too technical on my posts, because there are several sites and reviewers out there who are far more knowledgeable in that area than I am. I'm sure most of you know what the term aspect ratio means, but for those that are not familiar with it, I'll try to cover it as simply as possible. The aspect ratio of a film refers to the shape and size of the screen image. The higher the aspect ratio, the wider and more rectangular the picture image will be. Many non-film buffs don't even think about the aspect ratio of a film, and many of them don't even realize--or probably don't even care--that much of what is broadcast on television now is re-formatted to the 1:85.1 ratio of a typical widescreen monitor. This includes everything from 21st Century films made in 2:35.1 widescreen or classic TV shows filmed in the once-standard 1:33.1 ratio.

The reason the aspect ratio of a film is important is that, if it is changed, the intent of the filmmakers is being tampered with. There's a reason why a director chooses a certain ratio to work in, and there's a reason why a cinematographer shoots a scene a certain way. If you take away any part of the original image--or expand that image to make it fit a certain ratio--it's basically the same as taking a painting and cutting portions of it away to fit a certain frame.

Now, when it comes to the films in this Hammer Blu-ray set, all eight of them were made in the early 1960s. Trying to find a "official" original aspect ratio for these films when they were first released is a daunting task--a book or a website is liable to give you a totally different answer than another book or a website, and you can spend all day doing nothing but arguing with other Hammer fans on various internet sites over what the "right" aspect ratios supposedly are. If you want to know from me what the aspect ratios on this Blu-ray set "should" be, I honestly can't tell you.

The Universal Hammer Blu-ray set has the eight films spread out over four discs--two movies on each disc. The first disc could be called "The Terence Fisher Disc" since it contains a pair of the famed Hammer director's best films: THE BRIDES OF DRACULA and THE CURSE OF THE WEREWOLF. On the Universal Hammer DVD set, BRIDES was in 1:66.1 aspect ratio and WEREWOLF was in 1:85.1 ratio. On the Blu-ray set both movies have a 2:00.1 aspect ratio--a very unusual widescreen setting. In my vast home video collection I don't think I have any other titles that are in 2:00.1 It is this ratio that has caused so much consternation on the internet.

Does the 2:00.1 ratio make BRIDES or WEREWOLF seem noticeably different? In all honesty, I personally don't think so. I can't say that the shot set-ups are affected very much. What I did notice was how much more colorful the films appeared to be. BRIDES has a lot of grain to it, but I think it looks fantastic. That's especially high praise from me, considering how much I love BRIDES (it is without doubt my favorite Hammer film, and it contains my all-time favorite Peter Cushing performance). WEREWOLF looks great as well. Both movies, as well as all the titles in this set, are in 2.0 DTS mono sound, and in my mind the audio for these films is richer and fuller than what was on the DVD set.

The second disc contains NIGHT CREATURES and THE PHANTOM OF THE OPERA. Both these films are in the same aspect ratio that they were in the DVD set--that 2:00.1 ratio. Both movies look and sound perfectly fine to me.

The third disc features PARANOIAC! and THE KISS OF THE VAMPIRE. PARANOIAC! is one of Hammer's so-called "mini-Hitchcocks", and the black & white film has the same aspect ratio as it did in the DVD set--2:35.1. THE KISS OF THE VAMPIRE had a 1:85.1 ratio in the DVD set--in the Blu-ray it is presented at 1:78.1, and I have to say the visual quality on it looks splendid.

The fourth disc might be called "The Freddie Francis Disc" since he was responsible for directing the two films on it. NIGHTMARE, another of the "mini-Hitchcocks" is the other black & white film in the set and it has the same aspect ratio of 2:35.1 that it did in the DVD set. THE EVIL OF FRANKENSTEIN also has the same ratio as it did in the DVD set (1:85.1). I've seen EVIL more times than I care to remember, and I have to say that I've never seen the movie look as good as it does on this Blu-ray set.

There are no extras whatsoever on this set--not even trailers. But what this set does have is a group of legendary Hammer horrors that in my opinion look far better than I have ever seen them. The colors on the films are much more dynamic, and the audio is better.

Many on the internet have called this set a failure because of the aspect ratios. Even if the ratios on some of the films are not officially "proper"--I still think this is a worthy set. I'm not in any way trying to minimize improper aspect ratios, but for me at least it didn't impair my viewing, or my enjoyment of this set.

I fully understand that many people out there believe this is a bad set. Some of those people have pointed out that just about all the titles on this set have been released in supposedly better Blu-ray versions abroad--but those versions themselves have also come under fan criticism. Besides, many American Hammer fans don't have a region-free Blu-ray player, or they don't want to go to the trouble of spending a lot of money getting international Blu-ray discs. I got this Universal Hammer Blu-ray set from Amazon for about $40 with tax, and that averages out to $5 per movie. The Warner Hammer Blu-ray set which came out a couple years ago cost about the same, and it had only four movies (and it's my belief that the Warner set doesn't have the overall visual quality that the Universal Hammer set does). If you really want to see some expert comparisons between the Universal Hammer set and other Blu-rays featuring the same titles, go to the excellent DVD Beaver website.

I would heartily recommend this Blu-ray set to Hammer/classic horror film fans. (By the way, according to DVD Beaver, the set is region-free.) If the aspect ratios are that much of a bother for you, go ahead and keep using the Universal Hammer DVD set--but take into account that the DVD set crammed the eight movies on two double-sided discs, and many have had playback issues with it (I've had a couple times as well). The movies on this set are some of the best titles Hammer made. The aspect ratio problem (if you feel it is one) is disappointing, and all these films cry out for extensive extras, so this set certainly isn't perfect...but for those with Region One Blu-ray players, it is more than likely going to be the best Hammer product we can ever expect from Universal.