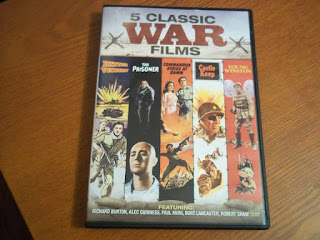 Last fall I purchased a DVD set of 5 war movies produced by Mill Creek Entertainment. The five films included in the set are BITTER VICTORY, THE PRISONER, COMMANDOS STRIKE AT DAWN, CASTLE KEEP, and YOUNG WINSTON. I wouldn't call any of these films outstanding--YOUNG WINSTON is probably the best of the lot--but since the set only cost me $7.50 (at Target), I think it was a good deal nonetheless.

The films are uncut and the ones that were filmed in widescreen are presented in their correct aspect ratios. Three films are on one disc and two are on another. As with most Mill Creek bargain sets, the visual quality isn't the best, but you get what you pay for.

BITTER VICTORY (1957) is of special interest to me because none other than Christopher Lee has a small role in it. The movie was actually Lee's first feature work after his participation in the filming of THE CURSE OF FRANKENSTEIN for Hammer Films. Hammer would soon change Lee's career forever, but BITTER VICTORY provided the actor with essentially the same type of supporting part he had been playing since the beginning of his acting career.

BITTER VICTORY concerns a commando raid behind enemy lines by British troops in World War II. The objective is information contained at a Nazi base in Benghazi, Libya. The raid is to be led by Major Brand (Curt Jurgens), an officer who has never been in combat. Captain Leith (Richard Burton) is also attached to the expedition. Before the war Leith romanced Brand's future wife (Ruth Roman).

During the raid Brand hesitates in killing a German sentry. Leith, who witnesses the act and kills the sentry himself, now believes that Brand is a coward. During the arduous trek across the desert back to British lines, the two men are at loggerheads, endangering the lives of the rest of the men involved in the mission, such as Sergeant Barney (Christopher Lee).

BITTER VICTORY was an Anglo-French co-production, filmed on location in Libya with interiors filmed in France. The movie was directed and co-written by Nicholas Ray, best known for such angst-filled dramas as REBEL WITHOUT A CAUSE and IN A LONELY PLACE. BITTER VICTORY has plenty of angst as well, what with the conflict between Brand and Leith. This isn't a slang-bang war epic--it is a dreary rumination on honor and courage. It doesn't help things that both Brand and Leith are unlikable characters. Jurgens makes Brand come off as weak and indecisive, while Burton's Leith comes off as smug and arrogant. Leith is not regular army--he's an archeologist and a quirky intellectual. (I can't help but wonder if the character of Leith was inspired by Lawrence of Arabia.) Both men are the last type of fellows you would want beside you on a commando raid.

I'm sure you're wondering why in the heck Curt Jurgens, of all people, is playing a British officer in WWII. Early on in the movie his Brand explains that he is from South Africa and hasn't lost his accent. This lame excuse doesn't prevent a viewer from assuming that Brand is going to turn out to be a German spy in the end. I guess Jurgens was someone's idea of high-concept casting, but in all due respect to the man's acting ability, having him in this role is distracting. Richard Burton as Leith should be the person that the audience has sympathy toward, but the actor seems to go out of his way to make the character as off-putting as possible.

Burton's performance may have to do with the fact that BITTER VICTORY was a troubled production. Jonathan Rigby's excellent book CHRISTOPHER LEE: THE AUTHORISED SCREEN HISTORY quotes Lee as saying that BITTER VICTORY was "the only film I ever worked on in the whole of my life that I instantly wanted to leave after one day of shooting. A nightmare--there's no other word for it." This statement is astounding, if one considers some of the unusual productions Lee was involved in throughout his long & varied career. Rigby states that both Nicholas Ray and Burton caused problems on the set, and if you factor that in with what had to have been a difficult location shoot in the Libyan desert, one can understand Lee's opinion.

As for Lee's own performance, his Sergeant Barney doesn't have a lot of lines or screen time--Barney spends most of his time in the background, cautiously watching Brand and Leith. (Lee is noticeable in every shot he's in, for the simple reason that he was so much taller than his fellow actors.) Lee doesn't go out of his way to get the audience's attention, and he doesn't try to upstage the other actors. He plays the Sergeant as a solid, efficient fellow, but at the same time Lee gives the impression that Barney is someone you don't want to mess with. It's frustrating that Lee didn't get more to do--after all, he was an actual WWII veteran, and he may have known more about commando raids than anyone on the set. The great character actor Nigel Green gets the showiest supporting role as a conniving soldier, and he runs with it.

BITTER VICTORY is the type of film one expects more out of, when you consider its cast and director. The book BRASSEY'S GUIDE TO WAR FILMS gives BITTER VICTORY a one star rating, and it gives the movie a one sentence review--"Tawdry tale set behind enemy lines in WW2 Libya." That's an apt description. It's one thing to have this film included on a cheap DVD set, but I don't think it is worth buying on its own. If you do happen to be at your local Target and see this set available, I think you should pick it up just for YOUNG WINSTON alone.
Posted by Dan Day, Jr. at 10:03 AM