HIS GIRL FRIDAY From Criterion 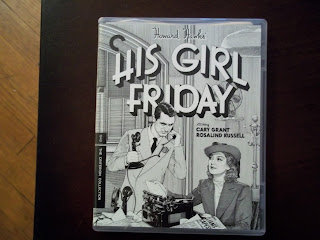 Criterion has released on Blu-ray one of the greatest--and wildest--comedies from the Golden Age of Hollywood. Directed by Howard Hawks and starring Cary Grant and Rosalind Russell, HIS GIRL FRIDAY has become so famous that many have forgotten that the movie is a remake of THE FRONT PAGE (1931). Criterion hasn't forgotten--THE FRONT PAGE is included in this release, on its own disc and with its own extras.

HIS GIRL FRIDAY is a visual and audio class in comic timing. Cary Grant and Rosalind Russell had never acted together before, but if you watch them in this film you'd swear they had worked alongside each other for years. The pace of the film literally leaves you out of breath--the next time someone says they don't like "old movies" because they are too slow, show them HIS GIRL FRIDAY. Many refer to HIS GIRL FRIDAY as a screwball comedy, but I see it more as a dark satire. The play on which it is based, Ben Hecht and Charles MacArthur's The Front Page, is about as biting as it can get in its examination of American big-city media and politics. The appealing personalities of Cary Grant and Rosalind Russell soften the hard edges of the story.

That being said, seeing HIS GIRL FRIDAY and THE FRONT PAGE within a short time of each other has made me change some of my thoughts about the former film. The main difference between the two pictures is of course the fact that the character of Hildy Johnson is a woman in HIS GIRL FRIDAY, but the films have a lot more in common than I generally assumed. For the most part the dialogue is almost exactly the same, and most of the scenes between the two films are very similar. THE FRONT PAGE has a raw, Pre-Code element to it, and HIS GIRL FRIDAY, especially on this new Blu-ray, has a sleek, crisp, Hollywood smoothness to it--but the basic story is essentially the same.

The disc featuring HIS GIRL FRIDAY features extras such as a visual discussion of Howard Hawks' film making technique by film scholar David Bordwell, brief looks at Howard Hawks and Rosalind Russell, and liner notes made out in the style of a mid-20th Century newspaper (I love this touch). The "newspaper" contains an article on the film by writer Farran Smith Nehme.

The 1931 version of THE FRONT PAGE was released on Blu-ray by Kino a couple years ago (I wrote a blog post on this release in September 2015). Film buffs will be interested--or maybe distressed--to find out that THE FRONT PAGE on this Criterion release is a different version of the film from the Kino release. According to the liner notes written by Michael Sragow (also in the form of an old-time newspaper), the Academy Film Archive attempted to restore a 35mm print of THE FRONT PAGE that was part of the Howard Hughes film collection at UNLV. The Academy's researchers discovered that the UNLV print was from a negative intended for the American release of the film, while the Kino version (and the one used for all the public domain releases over the years) was intended for foreign distribution. This means that this Criterion version of THE FRONT PAGE is one most people have never seen. (I'm sure those who already own the Kino release of the movie may not be too thrilled with that.) Criterion's disc of THE FRONT PAGE features a program on the discovery of this "new" print, and the differences between it and the other version. There's also a short look at the life and career of Ben Hecht.

HIS GIRL FRIDAY was for a time in the public domain, and copies of it on home video could be found everywhere. This Criterion release is without doubt the type of first class treatment the movie truly deserves. HIS GIRL FRIDAY is Hollywood studio film making at its finest. Howard Hawks, Cary Grant, and Rosalind Russell were all at the top of their game here, and the movie has a cast of great character actors that one just can't find in a typical 21st Century production. Any film buff should have a copy of HIS GIRL FRIDAY in their home video collection, and the bonus of having a "new" version of THE FRONT PAGE makes this one of the best Criterion releases in the last few years.
Posted by Dan Day, Jr. at 10:50 AM