This Month--Svengoolie And Godzilla On Me TV!

There's some exciting news for film geeks this month (well, exciting for me, anyway). The legendary horror movie host Svengoolie will be presenting Godzilla movies all February on his weekly show on the MeTV network.

For the past few years Sven has been showing movies from the Universal Monsters collection, due to a contract MeTV has with the company. There's nothing wrong with these films, but most classic horror film fans have seen them dozens and dozens of times. These Godzilla films will be a change of pace, and they will also allow Sven to come up with some new comedy bits.

I'm sure a lot of you are thinking..."Dan, you probably own all of these Godzilla movies on home video. Why is watching them on American broadcast TV--where they won't be in the proper aspect ratio, and they'll likely be edited, and with commercial interruptions--such a big deal??" It's not so much the movies themselves--it's the fact that Svengoolie is presenting them. I've literally been watching Svengoolie for over 30 years. Just about every great horror or science fiction movie I saw for the first time courtesy of Svengoolie. Seeing Svengoolie now brings back to me the nostalgic feeling of being a kid, staying up late, and discovering the joys of fantastic cinema. Yes, I have all these movies on home video in uncut pristine prints...but there was something special in being introduced to them on late night TV, especially at a young age. It's the type of feeling I never get to experience anymore.

There's one more main reason I'm excited about Sven showing Godzilla movies this month...it gives me more material to use in the live Svengoolie tweet-a-thon! The Svengoolie tweet-a-thon is an event I usually partake in every Saturday night during Sven's show (that fact alone shows you how amazing my social life is). A lot of fine folks take part in it, and the creativity and humor involved in some of the tweets is more entertaining than that old sketch show NBC has going on at the same time. The Svengoolie tweet-a-thon also restores my faith in humanity by proving that there's people out there who are as goofy as I am.

Here's the Svengoolie schedule for February--his show is on 10 PM EST every Saturday night on MeTV television stations throughout America.


Feb. 4--GODZILLA, KING OF THE MONSTERS The American version of the very first Godzilla movie, starring Raymond Burr. Yes, I know the Japanese version is a better overall film, but this version is the one most people know about. 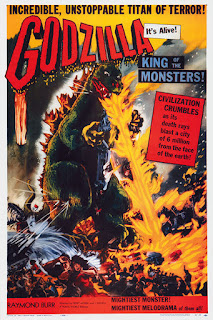 Feb. 18--GODZILLA VS. MOTHRA This 1964 film, also known as GODZILLA VS. THE THING, is generally considered by kaiju fans to be one of the best Godzilla movies ever made. I'm really happy Sven is going to show this one. 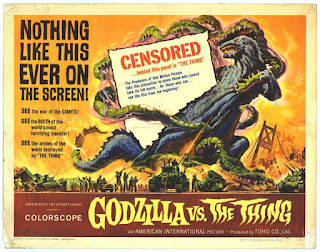 Feb 25--GODZILLA'S REVENGE One of the most unusual Godzilla films (and that's saying a lot), the story revolves around a young boy who dreams of hanging out with the Big G to escape his drab reality. The Sven fans on Twitter are going to go to town on this.


That's a great collection of Godzilla movies--you get to see the Big G's serious beginnings, his first sequel, one of his greatest battles with Mothra, and how he evolved into a hero for children. So if you don't have much to do on Saturday nights in February (like your humble author), enjoy some classic monster movies the way they should be seen--presented by a legendary TV horror movie host. And don't mind all the commercials for reverse mortgages and medical alert bracelets--they'll just give you a chance to go to the kitchen and get some junk food. And don't forget to join in with Sven fans like me on Twitter using the hashtag #svengoolie.