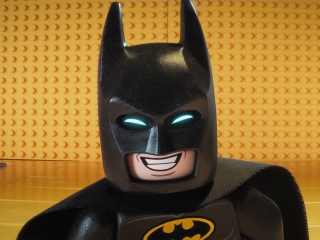 You want proof that Batman is the greatest comic book superhero of all time? Just go down to your local movie theater and see THE LEGO BATMAN MOVIE. Only the Dark Knight himself could have the starring role in a film based on a children's building block toy line. Some may consider this team-up goofy, others sacrilegious, but the fact is that THE LEGO BATMAN MOVIE has more authentic DC Universe references in it than all of the live-action Batman movies combined.

If you've seen any of the dozens and dozens of family-oriented computer animated films over the last decade, you know what to expect--famous contemporary actors doing the voice work, colorful & vibrant animated effects, sarcastic comedy for the adults, and a simple message for the kids. THE LEGO BATMAN MOVIE has all that, with the added bonus of the nearly 80 year-old history of the Caped Crusader. This movie totally embraces the Batman mythology, throwing in so many arcane nods to it (and the rest of the DC Universe) that one may not fully appreciate all the in-jokes until viewing it multiple times. The humor is very much in the vein of THE SIMPSONS and FAMILY GUY, but at the same time the story makes some very apt observations about Batman's life as a crime-fighting loner.

THE LEGO BATMAN MOVIE presents a Dark Knight who can save Gotham City from destruction, then five minutes later sit all alone in Wayne Manor watching rom-coms. The Lego Batman has to learn to work together with others, including his new ward Dick Grayson, and allow people into his life (he even has to show his true feelings for the Joker). Some comic readers may look upon this plot as ridiculous, but in the context of the Lego Movie Universe, it works.

Will Arnett provides the voice of the Lego Batman, and his comic readings here are excellent (although I'm convinced he's doing a take-off of Kevin Conroy's Batman voice). Plenty of other big names make vocal appearances as well. As for visual appearances, just about every DC superhero you've ever heard of (and many you haven't heard of) shows up in this. Geeks everywhere will enjoy it for that fact alone.

Speaking of geeks, I'm sure there's going to be some out there who will bemoan the idea of a movie like this, or those who will cover the internet with rants about how this is an attack on the "true spirit" of Batman. I would advise those folks to remember that every single adaptation of Batman has tinkered with the true spirit of the character. THE LEGO BATMAN MOVIE is entertaining fun--and that's more than I can say about almost all of the live-action Batman movies. I saw it with my 11 year-old niece and 5 year old nephew, and they loved it. THE LEGO BATMAN MOVIE isn't going to ruin the character--if anything, it shows how viable and legendary the Dark Knight is, and how he can be used in various and inventive ways.

You can say that THE LEGO BATMAN MOVIE is nothing more than a multi-platform cash grab....and you'd be right to an extent. But it is also a movie that totally accepts, and celebrates, the comic book geek world it is set in. So many live-action superhero films try to act as if they're not about superheros at all. THE LEGO BATMAN MOVIE gets it.