STAR IN THE DUST 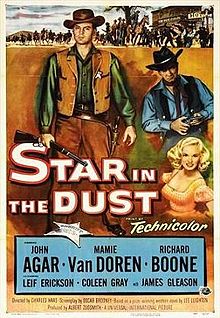 I get my cable service from Comcast, and at the beginning of every month I check Xfinity On Demand to see which titles have been added to the Free Movies section. While scrolling through the new additions I noticed STAR IN THE DUST, a Universal Western made in 1956. What really caught my attention was the fact that it starred 1950s sci-fi/monster movie hero John Agar, and blonde bombshell/pin up queen Mamie Van Doren. The movie also features the very first appearance in a Western film by a young actor by the name of Clint Eastwood.

Universal made a number of Westerns during the 1950s, the most famous being the collaborations between director Anthony Mann and James Stewart. The Universal Westerns also starred the likes of Audie Murphy, Jeff Chandler, Rock Hudson, and Glenn Ford. Today they are considered "B" pictures, but for the most part they are tight, efficient, and entertaining. STAR IN THE DUST is no exception to this.

John Agar plays Bill Jorden, who is Sheriff of the town of Gunlock. The Sheriff is a man with a particular problem. He's holding convicted killer Sam Hill (Richard Boone) in the town jail, and Sam is scheduled to hang at sundown. The cattlemen of the area, who hired Sam to chase farmers away, want Sam sprung from jail. The farmers, who are aware of this, want to lynch Sam as soon as possible. The Sheriff has to walk as fine a line as possible between the two groups, which is complicated by the fact that he's engaged to Ellen (Mamie Van Doren), who happens to be the sister of the leader of the cattlemen (Leif Erickson). Bill is determined that Sam will be executed lawfully, at the proper time, no matter what the circumstances.

STAR IN THE DUST plays out in a single day, and at 80 minutes, the movie has a nice pace to it. John Agar is certainly no John Wayne, or Clint Eastwood, but the fact that he's not a major personality helps the film story-wise. We would have confidence that a Wayne or a Gary Cooper would handle this situation, but one worries about Agar's Sheriff. The townspeople in the film are not all that sure about him either (Bill's father used to be the Sheriff, a fact that is brought up to him again and again).

John Agar starred in two of the most famous Westerns of all time, SHE WORE A YELLOW RIBBON and FORT APACHE. His career took a hit after his divorce from Shirley Temple, but he wound up signing a contract with Universal in the 1950s, where he appeared in numerous sci-fi/horror titles such as REVENGE OF THE CREATURE, TARANTULA, and THE MOLE PEOPLE. Agar may not have been a great actor, but he had an earnest, likable on-screen personality--you can't help but root for the guy. The fact that an "ordinary fellow" like Agar is the hero gives STAR IN THE DUST a different angle.

Richard Boone has relatively little screen time as Sam Hill, and when he is on-screen, he's mostly stuck in jail, but he still steals every scene he is in. It's too bad he didn't get more of a chance to show off his quirky acting style. One would expect Mamie Van Doren to be playing a saloon girl in a movie like this, but here she's the "nice girl" fiancee of Agar's Sheriff. Leif Erickson is an okay bad guy, but the real standout performers in STAR IN THE DUST are all the great character actors featured in the story, such as Paul Fix, James Gleason, and Harry Morgan. The town bartender is played by Stafford Repp, who is now best known for playing Gotham City Police Chief O'Hara in the 1960s BATMAN TV series.

As for Clint Eastwood...he's in the movie for about 30 seconds. He shows up soon after the start of the film--he has a brief exchange of dialogue with John Agar in the middle of the town, and that's it. This was near the end of Eastwood's contract with Universal, and it's fairly obvious that the company had no idea what to do with him. The role of the Sheriff would have been perfect for him, even at that time.

I wouldn't call STAR IN THE DUST an unheralded classic, but it does have a few interesting elements to it. The sheriff's office and the town jail is on the second story of a building (don't think I've seen that before in a Western), and one of the townsfolk spends the movie singing a song about Sam Hill's upcoming hanging, a touch that brings to mind HIGH NOON. (STAR IN THE DUST also reminds one of RIO BRAVO, even though it was made a few years before that movie.) There's more fistfights in this tale than gunfights, with a vicious catfight between actresses Coleen Gray and Randy Stuart. The climax has a very brutal "guy gets shot while standing on top of a building and falls to the street below" stunt that had me wondering how many bones the stuntman performing it must have broken. Director Charles Hass does a very good job with the proceedings, and the movie was presented on Xfinity OnDemand in a fantastic looking HD color widescreen print.

STAR IN THE DUST may be looked upon now as nothing more than a B movie, but I found it to be more effective than a few other Westerns that have been deemed more important. I feel that fans of classic Westerns will appreciate it.