DELUGE On Blu-ray From Kino 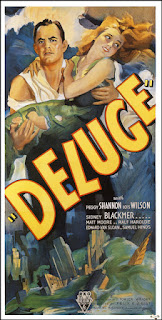 DELUGE is a film that for many years was considered lost. Released in 1933, it is looked upon as one of the first disaster movies--and it can also be categorized as one of the first post-apocalyptic movies as well. I had never seen this movie, but I was aware of it due to its being included in several books and articles on science-fiction cinema I had read over the years. Kino Lorber has just released a restored print of it on Blu-ray.

DELUGE was mentioned in the histories of science-fiction cinema due to its sequences featuring the destruction of New York City. These sequences actually appear in the beginning of the film. The rest of the story is much more scaled down, covering the attempts of a few survivors to carve a living in a new barren world.

The main protagonists in the story are a man named Martin (played by Sidney Blackmer), who believes his family has been lost in the earthquakes and floods which have ravaged the Earth. Martin tries to carry on by himself, and he meets up with a young attractive swimmer named Claire (Peggy Shannon). Claire is on the run from a brutish thug named Jepson (Fred Kohler). Jepson joins up with a group of other loutish individuals, and Martin and Claire must protect themselves from the gang. Meanwhile, Martin's wife and children are still alive, and part of a small band of men of women who are trying to rebuild in a civilized manner. The triangle between Martin, his wife, and Claire comes to a head during the film's climax.

For most viewers the opening scenes of mass destruction will be the most interesting thing about DELUGE. Some will consider the much-touted footage to be a disappointment, but one has to accept the fact that these were state of the art special effects for the times (and in fact the effects would be re-used in other movies and serials). It's not so much that the effects are bad, it's that the viewer assumes that the entire story will be filled with such catastrophic destruction, and it's not. The opening scenes feature character actors Samuel S. Hinds and Edward Van Sloan as worried scientists.

The rest of the film is a bit of a comedown after seeing New York City reduced to rubble. Sidney Blackmer's Martin is a decent fellow, but he doesn't seem to have the inner strength to deal with the supposed loss of his family and go on to be a lone survivor. (He's certainly not a Charlton Heston OMEGA MAN type.) Peggy Shannon has a bit of spunk as Claire, and she also shows some Pre-Code sexiness (in a couple of scenes it appears she's wearing nothing more than her underwear). Fred Kohler is decidedly nasty as the cruel Jepson. The post-destruction scenes have a very low-budget vibe to them--forests, caves, and some run-down buildings are all that represents this new world.

What makes DELUGE stand out, other than the FX, is the fact that it is one of the very first entries in the disaster/post-apocalypse genre. Many of the elements of that genre that are shown in such films as THE OMEGA MAN, the MAD MAX movies, and even THE WALKING DEAD TV series, crop up in DELUGE.  A lone survivor gathering supplies, convinced he's the only person left in the world...a character ticking off days on a makeshift calendar...a group of dangerous thugs trying to take advantage of the breakdown of civilization pitted against a group of folks who wish to restore that civilization...these things appeared in DELUGE years and years before they became something of a cliche.

The print that Kino has used for this Blu-ray isn't perfect, but at least the film exists. The extras include an audio commentary be Richard Harland Smith, who reveals several details behind the film's production, such as the creation of the film's effects. The Blu-ray also has an entire bonus feature, a 1934 film called BACK PAGE, starring the leading lady of DELUGE, Peggy Shannon. BACK PAGE is about a reporter (Shannon) who leaves the big city to become an editor of a newspaper in a small town in California. There she uncovers political scandal involving the town's oil well. Shannon (who kind of resembles Clara Bow) does very well here, even though the film itself is mediocre. The actress was good-looking, and she had a perky attitude...but unfortunately her film career was ruined by alcoholism, and she died very young (Richard Harland Smith goes into this in his commentary).

DELUGE is more interesting than entertaining. Film buffs will appreciate it more than a general audience. It deserves some notoriety as one of the earliest disaster movies, but this is not a Roland Emmerich--CGI fueled end of the world flick.
Posted by Dan Day, Jr. at 1:53 PM